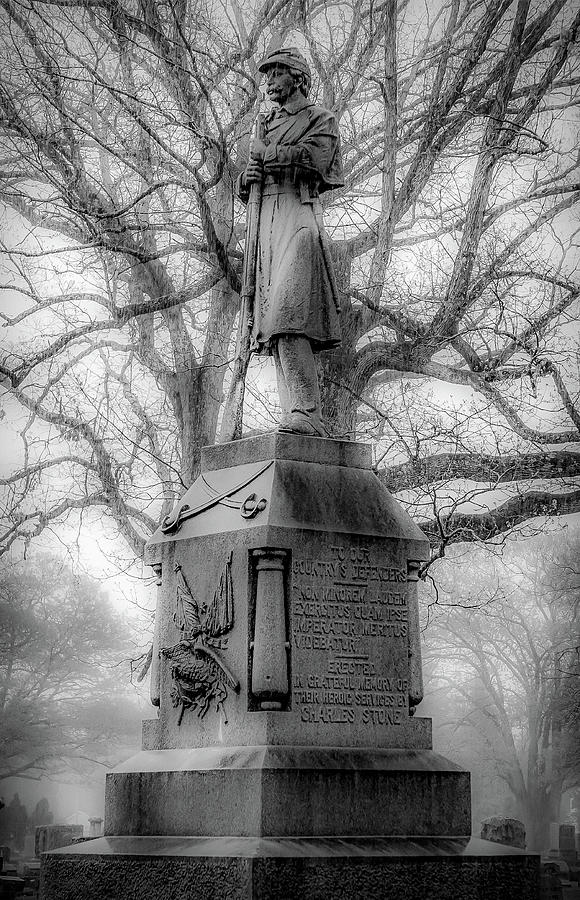 In stone is a photograph by Kendall McKernon which was uploaded on March 5th, 2018.

Union Cemetery is the final resting place of many 19th and 20th Century community leaders who made Fort Edward and Sandy Hill grow and flourish. A stroll though the cemetery will reveal many family names still visible in the area as streets, buildings, businesses, etc. There are many historic figures buried in the cemetery including Jane McCrea, Sarah McNeil and Duncan Campbell.

On April 27, 1847 the New York State Legislature passed an act authorizing the incorporation of rural cemetery associations. Based on this authority fourteen prominent citizens of Sandy Hill and Fort Edward gathered on July 26, 1847 to begin the process of establishing a cemetery association.

The first meeting of Union Cemetery Association was held on Saturday, July 31, 1847, at the Eagle Hotel in Sandy Hill. Union Cemetery originated with the purchase of fifteen acres of land from Rev. Joseph Parry and his wife, Mary, for $820.

The position of Sexton was established in 1866. A house for the sexton's use was built on the cemetery grounds in 1882 and continues as the Grounds Superintendent's home.

In 1873 the Board of Trustees voted to erect an ornamental iron fence along the front of the cemetery along with a handsome and appropriate central gate. The original contract was obtained from Healy & Co. in Brooklyn, NY.  In 1898 Charles Stone offered to erect, at his own expense, iron fencing along the north and south sides of the cemetery. This fencing was forged at the foundry of Washington Mower Machine Works in Sandy Hill. The original fencing on the east side was erected in 1931 by Newton and Hill. As the cemetery grew the east side fencing was moved to the north and south sides.

At the time Charles Stone added fencing to the cemetery he also erected a Civil War Soldiers' Monument. The monument is located between the soldiers' burial lot containing the remains of area Civil War soldiers and the Stone Mausoleum. In addition to Civil War soldiers and veterans burials include veterans of the Revolutionary War, War of 1812, Mexican War,  Spanish American War, World War I and II, Korean Conflict, Vietnam War and the Gulf War.