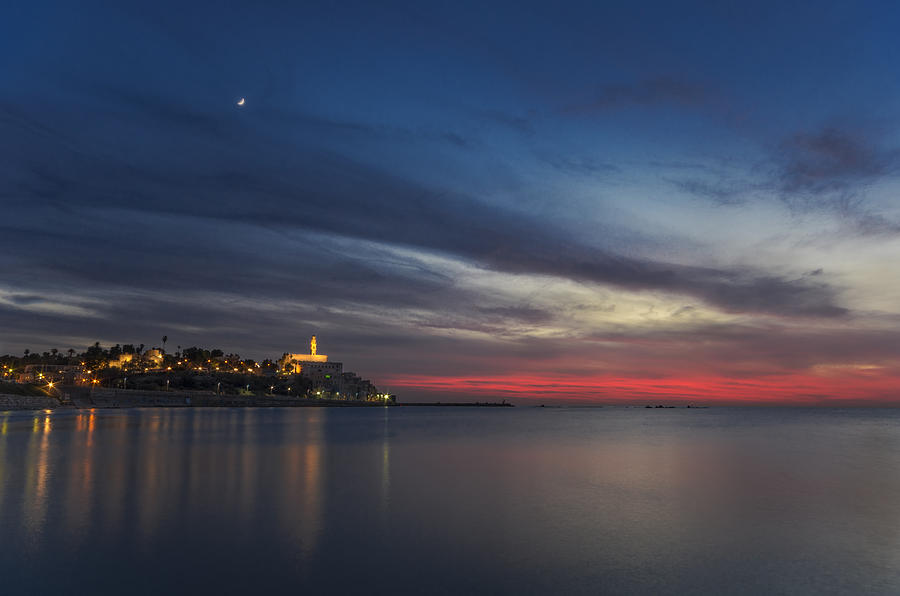 Jaffa on ice is a photograph by Ron Shoshani which was uploaded on November 29th, 2012.

A flat winter sea that looks almost as ice, touching the old city of Jaffa at the blue and red sunset hour,... more

a flat winter sea that looks almost as ice, touching the old city of Jaffa at the blue and red sunset hour,

Taken from the most south beach of Tel Aviv, overlooking the old city of Jaffa and the entrance to its famous historic port. Its the red blue sunset hour with a moon above observing the sunset scene and lightening the hill and gardens of old Jaffa.

The old city is rising up from the sea like a fortress on a hill, facing and making its mark against the waves of the Mediterranean sea.

Some 3000 years ago Jaffa served Egyptian and Phoenician sailors for construction of King Solomons Temple and for trade of cedars from Lebanon.

The old city of Jaffa is holding today numerous art galleries, the old port and a lighthouse, a beautiful garden on top of the hill, some cool restaurants and cafes.

Beautiful! Stunning red against the rest of the hues :) v

This is a great reflective image, the sky still remains the focal point

I love how the light reflects off that old building near the end of the point. Lovely work! v

Love the city highlights and the red of of the setting sun. v/f