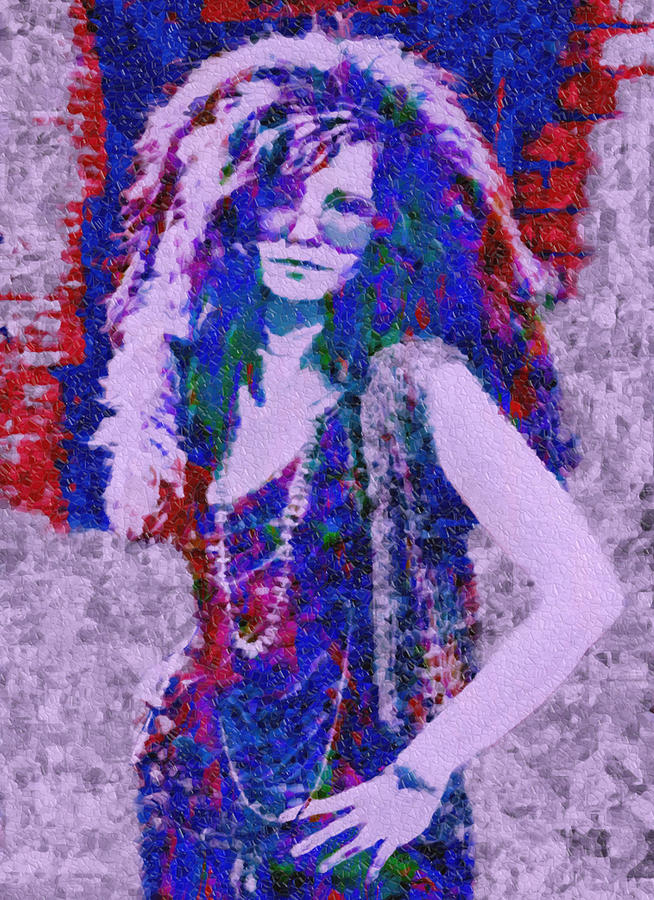 Janis Joplin Mosaic is a painting by Jack Zulli which was uploaded on September 24th, 2013.

Janis Lyn Joplin (January 19, 1943-October 4, 1970) was an American singer-songwriter who first rose to prominence in the late 1960s as the lead singer of the psychedelic-acid rock band Big Brother and the Holding Company, and later as a solo artist with her own backing groups, The Kozmic Blues Band and The Full Tilt Boogie Band. She was one of the more popular acts at the Monterey Pop Festival and later became one of the major attractions to the Woodstock festival and the Festival Express train tour. Janis Joplin charted five singles, and other popular songs from her four-year solo career include "Down on Me", "Summertime", "Piece of My Heart", "Ball 'n' Chain", "Maybe", "To Love Somebody", "Kozmic Blues", "Work Me, Lord", "Cry Baby", "Mercedes Benz", and her only number one hit, "Me and Bobby McGee". Joplin was well known for her performing abilities, and her fans referred to her stage presence as "electric". At the height of her career, she was known as "The Queen of Psychedelic Soul," and became known as Pearl among her friends. She was also a painter, dancer and music arranger. Rolling Stone ranked Joplin number 46 on its list of the 100 Greatest Artists of All Time in 2004, and number 28 on its 2008 list of 100 Greatest Singers of All Time. She was inducted into the Rock and Roll Hall of Fame in 1995.

Digital art is a general term for a range of artistic works and practices that use digital technology as an essential part of the creative and/or presentation process. Since the 1970s, various names have been used to describe the process including computer art and multimedia art, and digital art is itself placed under the larger umbrella term new media art.

After some initial resistance, the impact of digital technology has transformed activities such as painting, drawing, sculpture and music/sound art, while new forms, such as net art, digital installation art, and virtual reality, have become recognized artistic practices. More generally the term digital artist is used to describe an artist who makes use of digital technologies in the production of art. In an expanded sense, "digital art" is a term applied to contemporary art that uses the methods of mass production or digital media.

The techniques of digital art are used extensively by the mainstream media in advertisements, and by film-makers to produce special effects. Desktop publishing has had a huge impact on the publishing world, although that is more related to graphic design. Both digital and traditional artists use many sources of electronic information and programs to create their work.[6] Given the parallels between visual and musical arts, it is possible that general acceptance of the value of digital art will progress in much the same way as the increased acceptance of electronically produced music over the last three decades.

Congrats on Your Sale!!....Wonderful Tribute, she was one of a kind.

wow! She was so good with passion. One of the very best

Fantastic tribute to the late and great.

Fabulous and so groovy this painting of Janis Joplin Jack! Wonderful! FL

Thought the same as I was working this piece;), thank you, Christiane;)

Another Texan with a slight bend in the brain - Sometimes I think "creative" and "crazy" are equally proportional. Wonderful job, Jack LF

Agree with you Robert, thanks!

Wonderful portrait from Janis Joplin, Jack! I often listen to his wonderful music.

Great portrait of Janis Jack! So riveting and expressive! FL

This image is now Featured on the "Photography Based Digital Art" group home page.

Jack this is just wonderful; Janice has always been a favorite of mine and you have really brought out her unique personality in this awesome artwork - well done! Joyce (thanks for the memories) :-)

Thanks Joyce (and you're welcome)!

Thanks so much Carlotta;)

Great portrait. It would fit in well in the Group "Your Best Portraits"