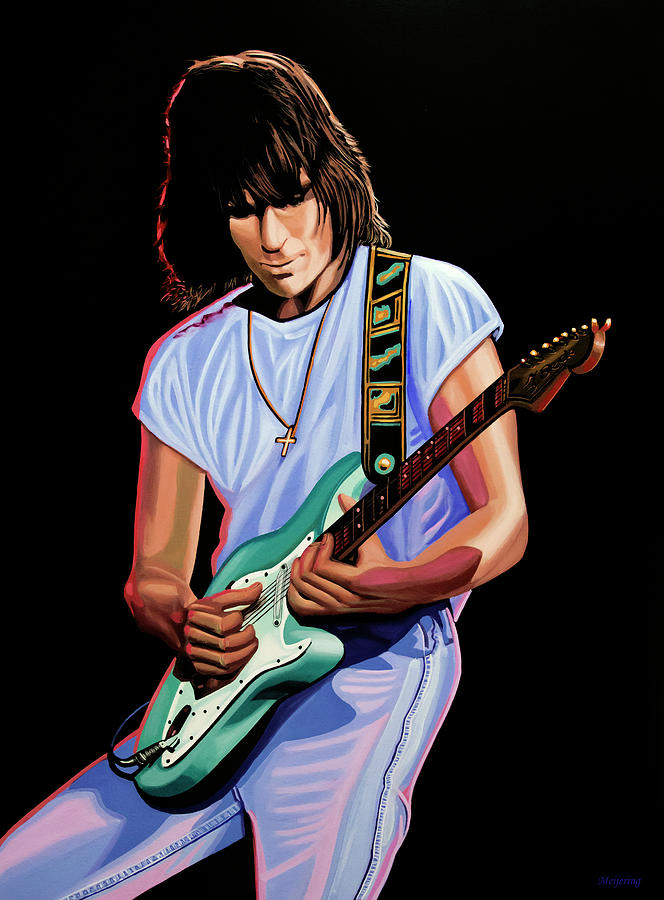 Jeff Beck Painting is a painting by Paul Meijering which was uploaded on July 4th, 2018.

Geoffrey Arnold Beck (born 24 June 1944) is an English rock guitarist. He is one of the three noted guitarists to have played with The Yardbirds (the other two being Eric Clapton and Jimmy Page). Beck also formed The Jeff Beck Group and with Tim Bogert and Carmine Appice, he formed Beck, Bogert & Appice.
Much of Beck's recorded output has been instrumental, with a focus on innovative sound, and his releases have spanned genre ranging from blues rock, hard rock, and an additional blend of guitar-rock and electronica. Although he recorded two hit albums (in 1975 and 1976) as a solo act, Beck has not established or maintained the sustained commercial success of many of his contemporaries and bandmates. Beck appears on albums by Rod Stewart, Mick Jagger, Tina Turner, Morrissey, Donovan, Diana Ross, Jon Bon Jovi, Malcolm McLaren, Kate Bush, Roger Waters, Stevie Wonder, Les Paul, Zucchero, Cyndi Lauper, Brian May, Roger Taylor, Stanley Clarke, Screaming Lord Sutch, ZZ Top, and Toots and the Maytals.

He was ranked fifth in Rolling Stone's list of the "100 Greatest Guitarists of All Time" and the magazine, upon whose cover Beck has appeared three times, has described him as "one of the most influential lead guitarists in rock". He is often called a "guitarist's guitarist". Beck has earned wide critical praise and received the Grammy Award for Best Rock Instrumental Performance six times and Best Pop Instrumental Performance once. In 2014 he received the British Academy's Ivor Novello Award for Outstanding Contribution to British Music. Beck has been inducted into the Rock and Roll Hall of Fame twice: as a member of the Yardbirds (1992) and as a solo artist (2009).

Congratulations on the Sale!

Congratulations! Your outstanding work has been featured in Pretty in Pink Blue or Purple. Please add it, if you wish, to the featured discussion thread, and any others you find appropriate. l/f/twt