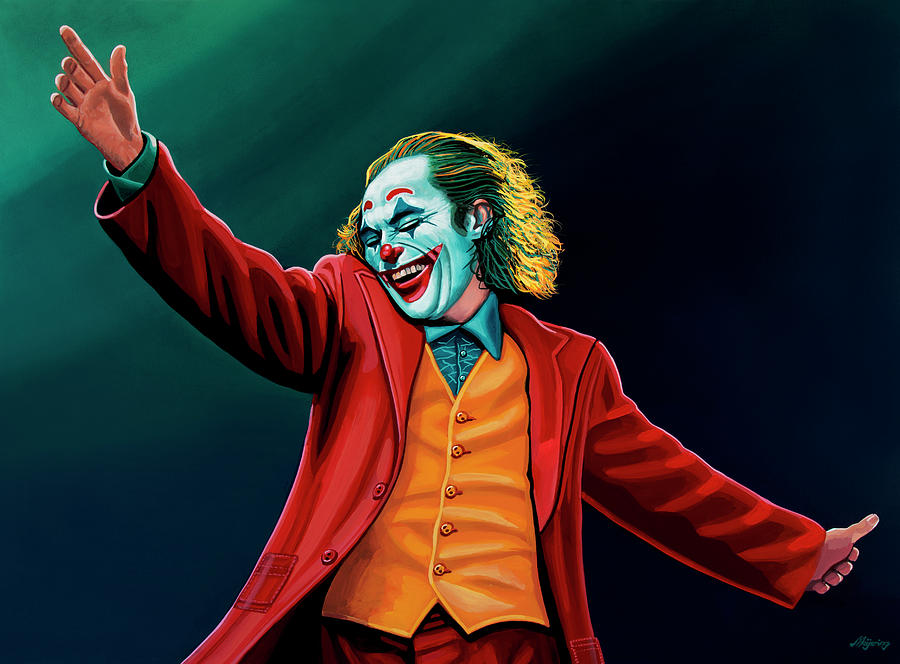 Joaquin in Joker Painting is a painting by Paul Meijering which was uploaded on August 25th, 2021.

Joker is a 2019 American psychological thriller film directed and produced by Todd Phillips, who co-wrote the screenplay with Scott Silver. The film, based on DC Comics characters, stars Joaquin Phoenix as the Joker. Joker provides a possible origin story for the character; set in 1981, it follows Arthur Fleck, a failed stand-up comedian whose descent into insanity and nihilism inspires a violent countercultural revolution against the wealthy in a decaying Gotham City. Robert De Niro, Zazie Beetz, Frances Conroy, Brett Cullen, Glenn Fleshler, Bill Camp, Shea Whigham, and Marc Maron appear in supporting roles. Joker was produced by Warner Bros. Pictures, DC Films, and Joint Effort, in association with Bron Creative and Village Roadshow Pictures, and distributed by Warner Bros.

Phillips conceived Joker in 2016 and wrote the script with Silver throughout 2017. The two were inspired by 1970s character studies and the films of Martin Scorsese (particularly Taxi Driver and The King of Comedy), who was initially attached to the project as a producer. The graphic novel Batman: The Killing Joke (1988) was the basis for the premise, but Phillips and Silver otherwise did not look to specific comics for inspiration. Phoenix became attached in February 2018 and was cast that July, while the majority of the cast signed on by August. Principal photography took place in New York City, Jersey City, and Newark, from September to December 2018. Joker is the first live-action theatrical Batman film to receive an R-rating from the Motion Picture Association of America, due to its violent and disturbing content.

Joker premiered at the 76th Venice International Film Festival on August 31, 2019, where it won the Golden Lion, and was released in the United States on October 4, 2019. The film received generally positive reviews, but was also highly polarizing; while Phoenix's performance, Phillips' direction, and Hildur Guðnadóttir's musical score received high marks, the dark tone, portrayal of mental illness, and handling of violence divided responses.[7] Joker also generated concerns of inspiring real-world violence; the movie theater where the 2012 Aurora, Colorado mass shooting occurred during a screening of The Dark Knight Rises refused to show it. Despite this, the film became a major box office success, setting records for an October release. Joker has grossed over $1 billion, making it the first R-rated film to pass the billion-dollar mark at the worldwide box office, the seventh-highest-grossing film of 2019, and the 36th-highest-grossing film of all time.

Beautiful work, Paul!! Congratulations, your work is Featured in "Your Best Work"! I invite you to place it in the group's "Featured Image Archive" Discussion!!

Beautiful work, Paul!! Congratulations, your work is Featured in "Acrylic Art"! I invite you to place it in the group's "Featured Image Archive" Discussion!!

Congratulations your image has been chosen as a feature on "IF THE IMAGE EXCITES YOU" To ensure that your image remains available over time, you can archive your art in the feature archive discussion.

Beautiful detailed work, Paul!!! Congratulations, your work is Featured in "Realistic Art"! I invite you to place it in the group's "Featured Image Archive" Discussion!!