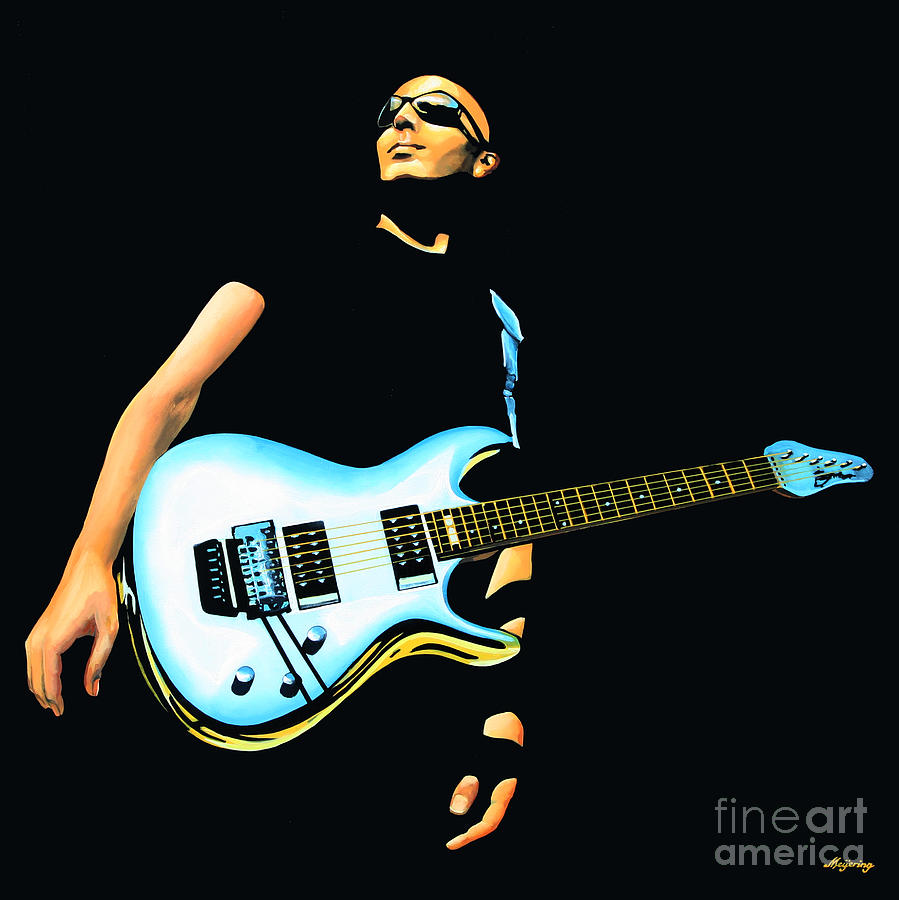 Joe Satriani Painting is a painting by Paul Meijering which was uploaded on April 16th, 2012.

Joseph "Joe" Satriani (born July 15, 1956) is an American instrumental rock guitarist and multi-instrumentalist. Early in his career, Satriani worked as a guitar instructor, with many of his former students achieving fame, such as Steve Vai, Larry LaLonde, Rick Hunolt, Kirk Hammett, Andy Timmons, Charlie Hunter, Kevin Cadogan, and Alex Skolnick; he then went on to have a successful solo music career. He is a 15-time Grammy Award nominee and has sold over 10 million albums, making him the biggest-selling instrumental rock guitarist of all time.

In 1988, Satriani was recruited by Mick Jagger as lead guitarist for his first solo tour. Satriani briefly toured with Deep Purple as the lead guitarist, joining shortly after the departure of Ritchie Blackmore in November 1993. He has worked with a range of guitarists during the G3 tour, which he founded in 1995. His G3 collaborators have included Vai, LaLonde, Timmons, Steve Lukather, John Petrucci, Eric Johnson, Yngwie Malmsteen, Brian May, Patrick Rondat, Paul Gilbert, Adrian Legg, Kenny Wayne Shepherd, Steve Morse and Robert Fripp. Satriani has been the guitarist for the supergroup Chickenfoot since joining the band in 2008.

Congratulations on this marvellous painting being FEATURED in "PAINTING THE OLD WAY" , L/F….group administrator John Malone

Thank you so much, John, for your compliments, support and the feature in your marvellous group!!;-))

Thank you so much, John for your support and the feature in your exciting group!!;-))

Thank you so much, Chris!

Another former Deep Purple Guitarist and still no Blackmore... I am deeply disappointed... oh well something for you to add to the to do list. In all seriousness you do great work!

Thank you so much, for your comments, Robert, and I am sorry to have disappointed you...;-) Well.., maybe one day!;-)