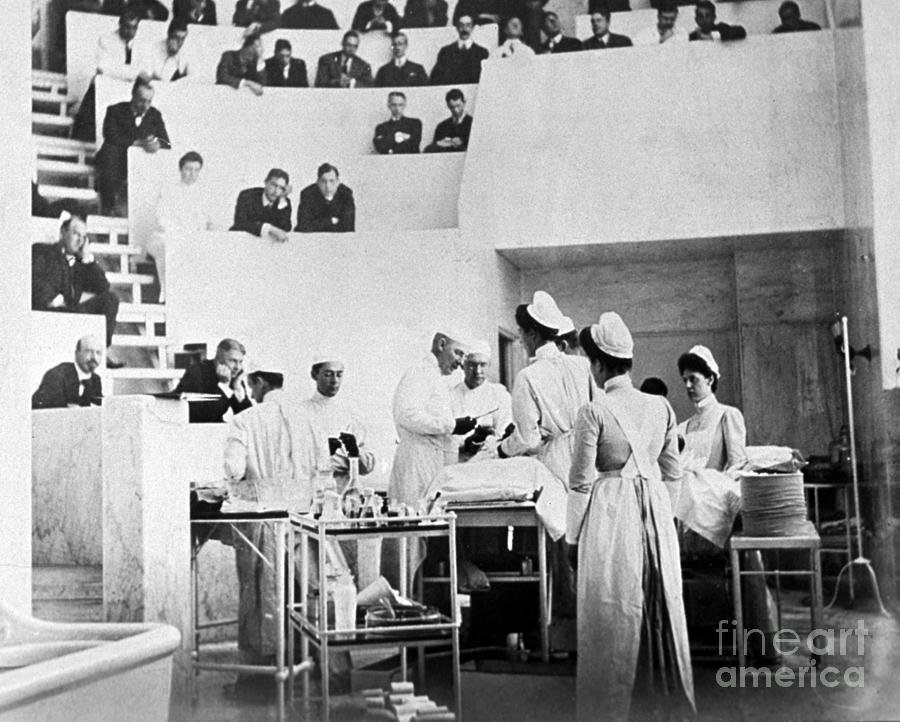 John Hopkins Operating Theater, 19031904 is a photograph by Science Source which was uploaded on June 1st, 2013.

Dr. Halsted with two of the surgeons he trained, Drs. Cushing and Young in the operating theater being observed by physicians and/or students seated... more

Dr. Halsted with two of the surgeons he trained, Drs. Cushing and Young in the operating theater being observed by physicians and/or students seated in the background; there are three nurses and two student attendants. Johns Hopkins Hospital Baltimore, 1903-1904. William Stewart Halsted (1852-1922) was an American surgeon who emphasized strict aseptic technique during surgical procedures, was an early champion of newly discovered anesthetics, and introduced several new operations, including the radical mastectomy for breast cancer. Harvey Williams Cushing (1869-1939) was an American neurosurgeon and a pioneer of brain surgery, and the first to describe Cushing's syndrome. He is often called the "father of modern neurosurgery." Hugh Hampton Young (1870-1945) was an American surgeon, urologist, and medical researcher. Young's contributions to the medical field are several inventions and discoveries; the "boomerang needle", a type of surgical needle designed for working with deep incisions, the Young punch, an instrument used in prostatectomy procedures and, with associates the discovery of the antiseptic merbromin, more popularly known as Mercurochrome. Young is also credited with performing the first radical perineal prostatectomy, an operation for removal of prostate cancer.