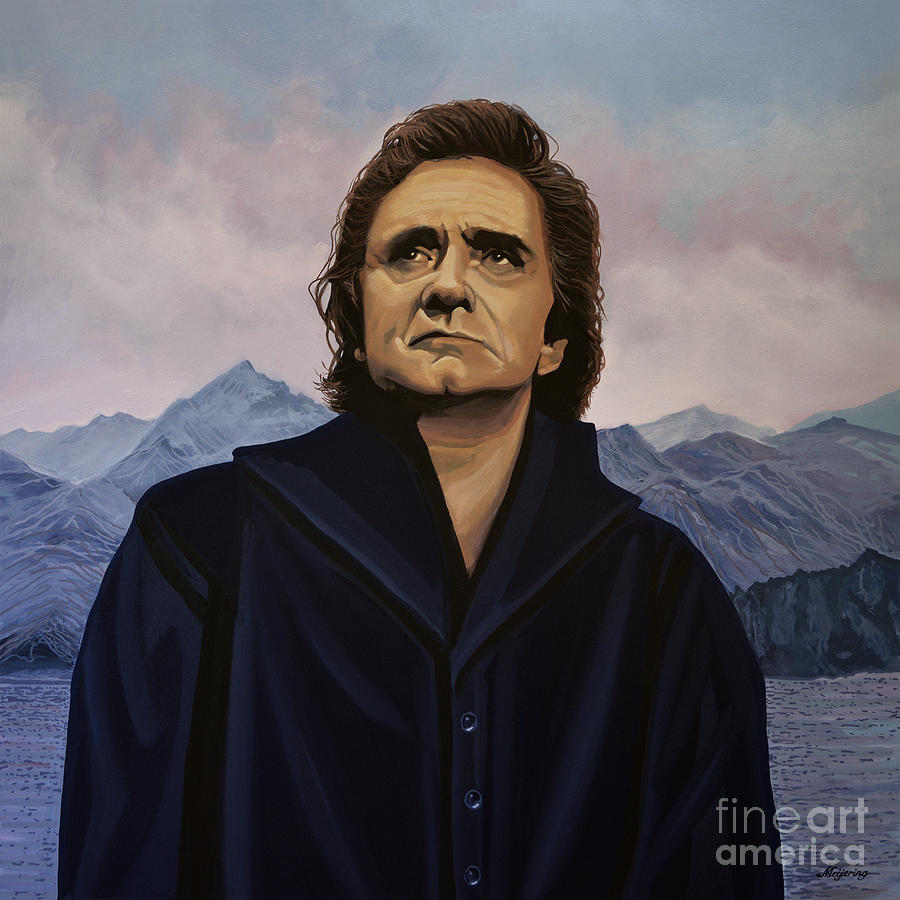 Johnny Cash Painting is a painting by Paul Meijering which was uploaded on June 24th, 2014.

John R. "Johnny" Cash (born J. R. Cash; February 26, 1932 - September 12, 2003) was an American singer-songwriter, guitarist, actor, and author, who was widely considered one of the most influential musicians of the 20th century and one of the best-selling music artists of all time, having sold more than 90 million records worldwide. Although primarily remembered as a country music icon, his genre-spanning songs and sound embraced rock and roll, rockabilly, blues, folk, and gospel. This crossover appeal won Cash the rare honor of multiple inductions in the Country Music, Rock and Roll, and Gospel Music Halls of Fame.

Cash was known for his deep, calm bass-baritone voice, the distinctive sound of his Tennessee Three backing band, a rebelliousness coupled with an increasingly somber and humble demeanor, free prison concerts, and a trademark look, which earned him the nickname "The Man in Black". He traditionally began his concerts with the simple "Hello, I'm Johnny Cash", followed by his signature "Folsom Prison Blues".

Much of Cash's music echoed themes of sorrow, moral tribulation and redemption, especially in the later stages of his career. His best-known songs included "I Walk the Line", "Folsom Prison Blues", "Ring of Fire", "Get Rhythm" and "Man in Black". He also recorded humorous numbers like "One Piece at a Time" and "A Boy Named Sue"; a duet with his future wife, June Carter, called "Jackson" (followed by many further duets after their marriage); and railroad songs including "Hey, Porter", "Orange Blossom Special" and "Rock Island Line". During the last stage of his career, Cash covered songs by several late 20th century rock artists, most notably "Hurt" by Nine Inch Nails.

Congratulations on your feature in 1000 Views! Fl

Opps! I forgot to add "I.M.O.H.O." I'm pretty sure that Paul might be kind enough to correct me if I seriously got something really wrong, but if I'm gonna be "bold" with the kind of stuff I say, I do need to make sure I'm clear about thing being my own opinion. (And subject to correction, which will help me a lot as I'm trying to sharpen up my skills in viewing works in ways to better see and understand the "Whole Picture" within the picture.) -Morgan

Being pretty much a Johnny Cash fan, this one caught my attention. It's pure "Meijering." To understand this comment better, refer to my posting on Joni Mitchel. I refer to the deep "shadowing / highlighting" I concider "emblamatic" or "signature" of his work. The best illistration of this is the "too dark" for the obvious light levels, of the shadow under the chin and the cleft dimple in the chin. To me, Paul may have decided that highlighting the dimple was important. Being sort of a 2020 version of Dutch Master, > "Highlighting" is NOT bright, but intentionally over darkened to the point of deep black. (Rather than the dark grey appropriate to the light levels of the other shadowing etc.)< -Morgan

Wonderful! Congrats on your sale!

Thank you very much, Joan-Violet, for your lovely compliment!...;-))

My parents took me to see 'The Man In Black' when I was roughly three years old (1971 or 72). I have a single memory of that show. I remember him sitting alone in the center of the stage... a single spotlight on him and his guitar... the rest of the place bathed in darkness. It is a very fond memory. This painting reminds me of that. Thank you for sharing it with us my friend.

Well done on an artist worthy of respectful treatment.

Amazing work! I absolutely love it all ^.^

Thank you so very much, Sunshine!!;-)

Thanks you so much, Dawn, for your lovely comment!;-)

Nicely done, your image is listed in the "Created by my Hands" image gallery.

Thank you, David, for your compliment and your support!;-)