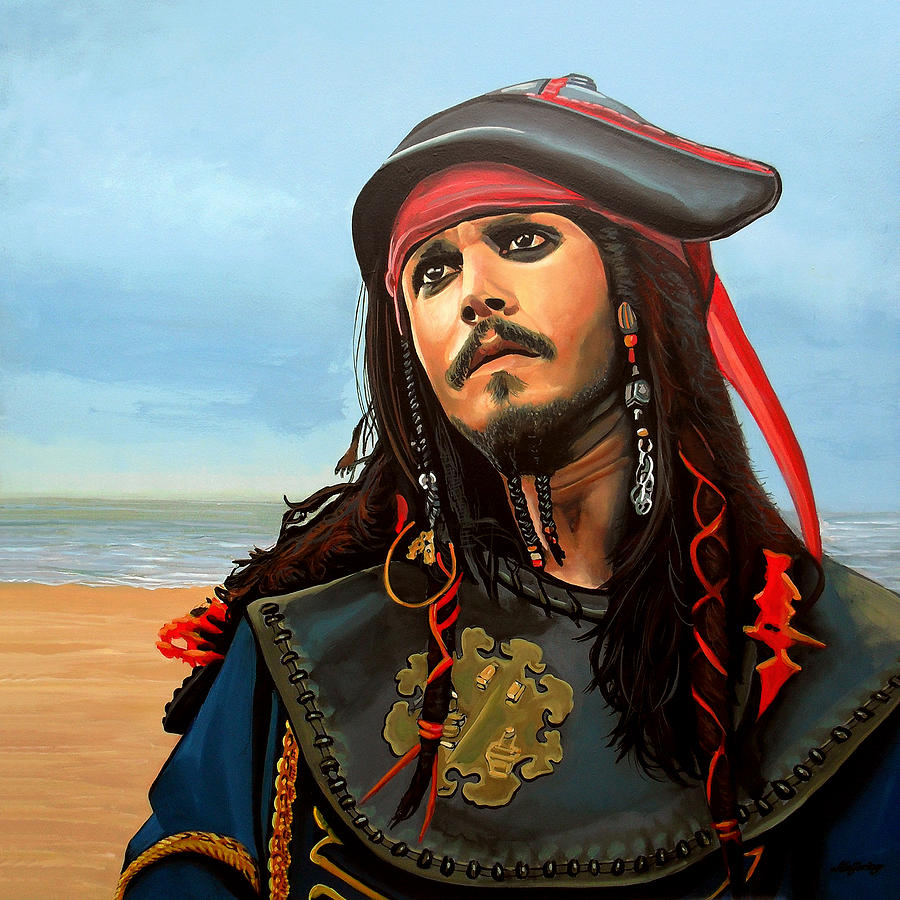 Johnny Depp as Jack Sparrow is a painting by Paul Meijering which was uploaded on April 15th, 2013.

Captain Jack Sparrow is a fictional character and the main protagonist in the Pirates of the Caribbean film series. The character was created by screenwriters Ted Elliott and Terry Rossio, and is portrayed by Johnny Depp, who based his characterization on Rolling Stones guitarist Keith Richards and cartoon character Pepe Le Pew. He first appears in the 2003 film Pirates of the Caribbean: The Curse of the Black Pearl. He later appears in the sequels Dead Man's Chest (2006), At World's End (2007), On Stranger Tides (2011), and Dead Men Tell No Tales (2017).

In the films, Sparrow is one of the nine pirate lords in the Brethren Court, the Pirate Lords of the Seven Seas. He can be treacherous and survives mostly by using wit and negotiation rather than by force, opting to flee most dangerous situations and to fight only when necessary. Sparrow is introduced seeking to regain his ship, the Black Pearl, from his mutinous first mate, Hector Barbossa. Later he attempts to escape his blood debt to the legendary Davy Jones while battling the East India Trading Company. The character's role expanded as the films progressed.

That is very impressive! I will be featuring it in Beautiful Creations :)

Thank you very much, Hannah, for your compliment and the feature!!;-)

Love your work, but this one takes some beating. Do the celebs know about you?

Thank you so much, Julie, for your kind words!!... Some of them do... and have the painting themselves. Thanks again, Julie!;-)

Such detail in your work Paul. Interesting expression on his face. L/V

Thank you very much, Tim, for your lovely comment!;-)

You have a way of sharing the essence of the people you paint!!! Excellent!!!

Thank you, David, for your wonderful compliments!;-)

Paul, excellent work! You really captured Johnny Depp. Such expression in his eyes...v/L

Lou, thank you so much for your warm compliment!...

Thank you so much, Donika! For your compliment and feature!...;-)