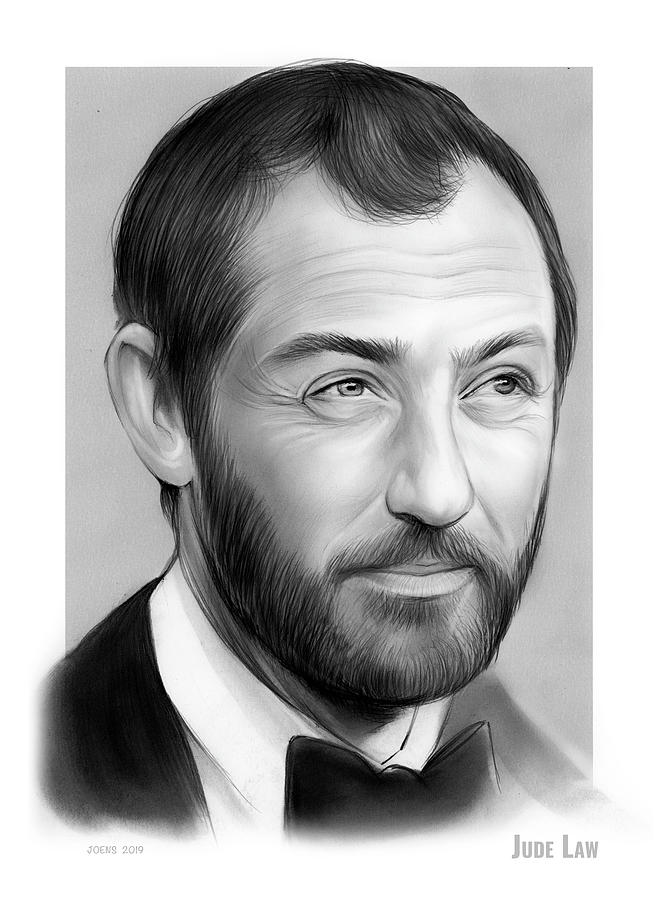 Jude Law is a drawing by Greg Joens which was uploaded on December 29th, 2019.

Sketch of Jude Law.
He is an English actor. He has received nominations for two Academy Awards, four Golden Globe Awards, two Screen Actors Guild Awards, and two British Academy Awards (BAFTAs), winning one. In 2007, he received an Honorary César and was named a knight of the Order of Arts and Letters by the French government, in recognition of his contribution to World Cinema Arts.

Law rose to international fame for his role in Anthony Minghella's The Talented Mr. Ripley (1999), for which he won the BAFTA Award for Best Actor in a Supporting Role and was nominated for the Golden Globe Award for Best Supporting Actor – Motion Picture and the Academy Award for Best Supporting Actor. In 2004, he received Academy Award, Golden Globe and BAFTA nominations for his role in Minghella's epic war film Cold Mountain (2003). Law's other notable films include Gattaca (1997), Enemy at the Gates (2001), Steven Spielberg's A.I. Artificial Intelligence (2001), Sam Mendes' Road to Perdition (2002), Sky Captain and the World of Tomorrow (2004), Alfie (2004), Mike Nichols' Closer (2004), I Heart Huckabees (2004), The Holiday (2006), Repo Men (2010), Contagion (2011), Martin Scorsese's Hugo (2011), Joe Wright's Anna Karenina (2012), Steven Soderbergh's Side Effects (2013), Wes Anderson's The Grand Budapest Hotel (2014) and Paul Feig's Spy (2015). He also portrayed Dr. Watson in Guy Ritchie's Sherlock Holmes (2009) and Sherlock Holmes: A Game of Shadows (2011). In 2017, he portrayed the fictional Pope Pius XIII in the HBO drama miniseries The Young Pope and in 2018 portrayed Albus Dumbledore in Fantastic Beasts: The Crimes of Grindelwald. His highest-grossing release came with the Marvel Cinematic Universe superhero film Captain Marvel (2019), in which he played Yon-Rogg.

Law has also had an accomplished career on stage, and has received nominations for three Laurence Olivier Awards and two Tony Awards. He has performed in several West End and Broadway productions.