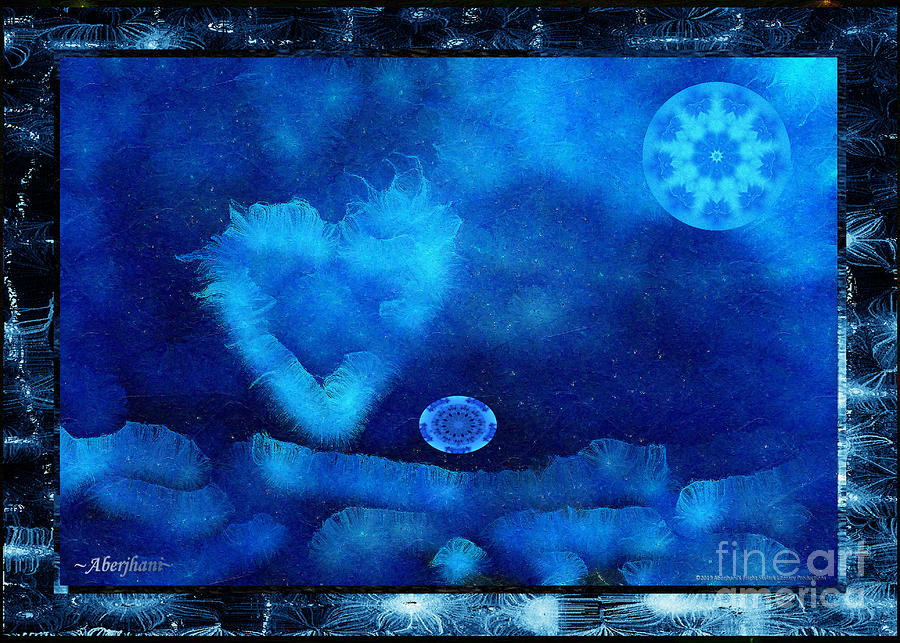 Kaleidoscope Moon for Children Gone Too Soon Number 4 - Cerulean Valentine is a piece of digital artwork by Aberjhani which was uploaded on January 17th, 2019.

THE IMAGE ITSELF
This is the fourth... more

THE IMAGE ITSELF
This is the fourth canvas in the "Kaleidoscope Moon for Children Gone to Soon Series" and the eighteenth Silk-Featherbrush print. If the numbering is a little confusing, I apologize for that and confess to sometimes getting a little ahead of myself. But I am happy about the way different styles as well as different themes in developing artwork reinforce each other.
Cerulean blue was included in the title of this piece to specify it is more about the transcendent nature of love itself than the painful depression which can follow the loss of a loved one to violence (as people in Nairobi, Kenya, and elsewhere are currently experiencing). It celebrates the spark of hopes and flurry of dreams shared regarding those lives previous to the loss and the cherished memories which persist afterwards. So in this image the heart stands somewhat embattled but holding its ground in the name of love, faith, and undefeated joy while the Kaleidoscope Moon shines with compassionate solidarity above and a smaller light glows nearby.

So poignant. Your description and words moved me very much. Your art is a beautiful tribute.

Thank you Jen for the visit. I'm enjoying exploring the work in your fantastic collections.

I appreciate that very much Lynn. As pointed out in the artwork description, "Kaleidoscope Moon for Children Gone Too Soon Number 4 - Cerulean Valentine" means a lot to me for a lot of different reasons.

This is beautiful- aesthetically and symbolically! It reaches your soul and paints it blue

Thanks tremendously M Little. Very glad you like it.

Aberjhani this is such a beautiful and meaningful work, your words and intention are soulful and deeply significant.

I appreciate that very much Amy. Artwork might not solve the problem addressed by "Kaleidoscope Moon for Children Gone Too Soon Number 4 - Cerulean Valentine" but I believe it can help us get there eventually by raising and maintaining awareness until issues are resolved.

Thanks so much Andrzej for stopping by and checking out "Kaleidoscope Moon for Children Gone Too Soon Number 4 - Cerulean Valentine." Glad you like it.

Glad you like it Angeles. The Kaleidoscope Moon Series means a lot to me.

Such a delicate and merciful piece, Aberjhani! The story behind is so moving and this is a really tactful way of honoring those gone too soon. L/F

Thank you Yoonhee. Particularly glad the story had some meaning for you.

What a poignant story behind!! Love this beautiful piece of art!! Aberjhani! l/f

Appreciate that Diann. Thank you.

How beautiful! Touching sentiment and so special!! (lf)

Thanks for checking it out Ben.

Thank you Constance. I find your own work quite inspiring.

Thank you Aaron, Lara, Cia, & Barbie for your kind and encouraging comments. Appreciate them very much.

What a sad concept, so beautifully depicted!!!!lf

Appreciate that very much VIVA. We are rowing similar boats where this subject is concerned.

So beautiful,Aberjhani. All the elements,the colours, perfectly express your heartfelt need to celebrate the immeasurable loss of innocent souls. It certainly is solace for me,my Friend (as you know). f.v..VIVA