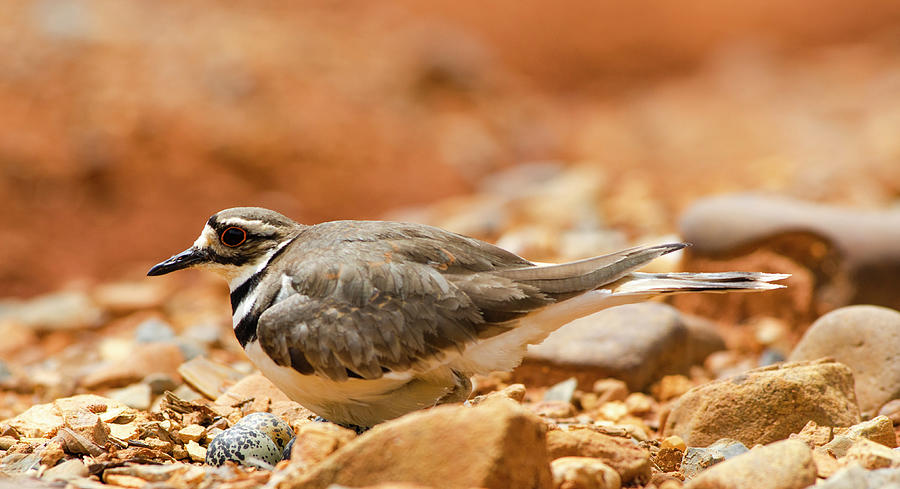 Killdeer Bird is a photograph by Jim Cook which was uploaded on April 29th, 2020.

Killdeer is such a strange name for this pretty looking bird. Its name derives from the sound it makes which to some, sounds like kill deer.... more

Killdeer is such a strange name for this pretty looking bird. Its name derives from the sound it makes which to some, sounds like kill deer. Actually, the bird is harmless to deer and most anything else except insects and invertebrates, which are its primary source of food.
I found this subject on the rocky shore of Boone Lake here in Piney Flats Tennessee this spring. Really it was our two grandchildren who spotted it while my wife was keeping the boys busy, exploring. When coming back to our house I asked them to take me back sensing a photo opportunity.
As we approached, another bird began skittering across the rocky ground. I later learned this behavior is meant to mimic a broken wing and will divert predators away from its nest.
We made our way, carefully, not wanting to disturb any other nests. When we got to the nest the boys had found, there was the Mother and four eggs. The nest is not what most would think it is, since it really is just a scrape on a little bit of a rise of land. It is out in the open so that the parent can see anything that may approach.
I kept my distance and she kept a wary eye on me. The boys being very inquisitive at 5 and 6 years old wanted to get up close, but if they did, she would rise up and fluff her wings. It seems an instinctual characteristic evidenced throughout nature. As she exposed herself in this way, I could see her colors of browns, grays and reds. Two distinctive black bands across its breast and then the rest of breast was white.
I got several shots and then left her to her incubating. I’m guessing, that the parent was female, but both parents take turns until the eggs hatch.
I was surprised that unlike the earlier bird which left its nest, this bird was prepared to stand its ground and protect her unborn chicks. If it had thought us to be predators it would have pretended to be injured. Instead it employed a tactic used when cattle or something large might inadvertently step on the eggs. If we had got too close it would have flown straight at our face forcing us to sidestep.
The Killdeer is a large Plover or a wading, shorebird. Usually found near the sea or lakes. Preferring open ground, fields and mud flats.

Congratulations Jim, your work is Featured in "Birds In Focus" I invite you to place it in the group's "2020 Featured Image Archive" Discussion!! L/Tweet

Excellent capture of the warm sunlight...

great capture of a bird