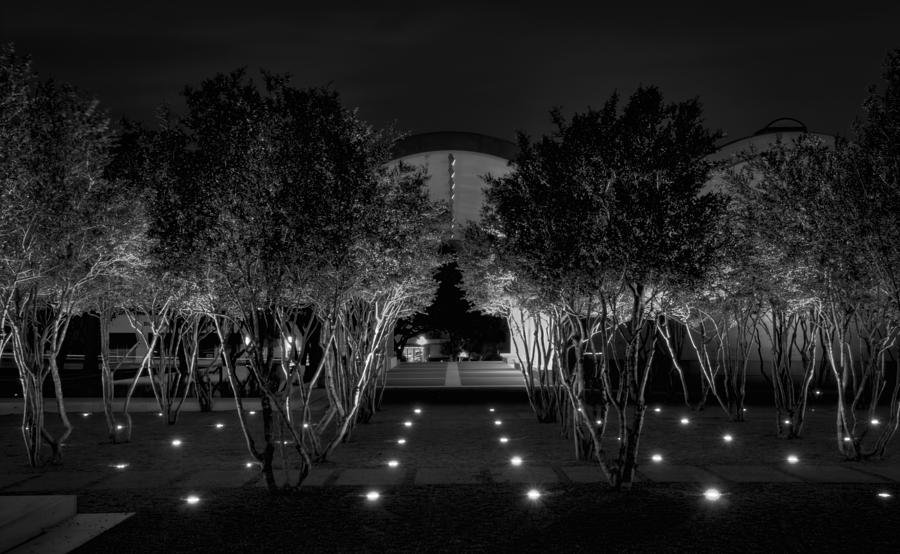 Kimbell After Dark is a photograph by Joan Carroll which was uploaded on December 6th, 2013.

Nighttime brings a different type of beauty to the Kimbell Art Museum in Fort Worth, TX. The building was designed by renowned architect Louis I.... more

Nighttime brings a different type of beauty to the Kimbell Art Museum in Fort Worth, TX. The building was designed by renowned architect Louis I. Kahn and is widely recognized as one of the most significant works of architecture of recent times. The landscaping, partially seen here, has been described as "Kahn's most elegant built example of landscape planning" by Philadelphia landscape architect George Patton. Approaching the main entrance past a lawn edged by pools with running water, the visitor enters a courtyard through a grove of Yaopon holly trees. The sound of footsteps on the gravel walkway echoes from the walls on either side of the courtyard and is magnified under the curved ceiling of the entry porch. Harriet Pattison played the lead role in the landscape design and is also the person who suggested that open porches flanking the entrance would create a good transition from the lawn and courtyard to the galleries inside. The museum itself especially noted for the wash of silvery natural light across its vaulted gallery ceilings. The founding director of the museum, Richard Fargo Brown, declared that the new building should itself be a work of art, "as much a gem as one of the Rembrandts or Van Dycks housed within it." Brown discussed the goals of the institution and its new building with the trustees and summarized them in a four-page "Policy Statement" and a nineteen-page "Pre-Architectural Program" in June 1966. Brown's "Policy Statement" called for the new building to be "a work of art." It was augmented by the "Pre-Architectural Program," which specified that "natural light should play a vital part" in the design and that "the form of the building should be so complete in its beauty that additions would spoil that form"

Bravo on your wonderful sale.