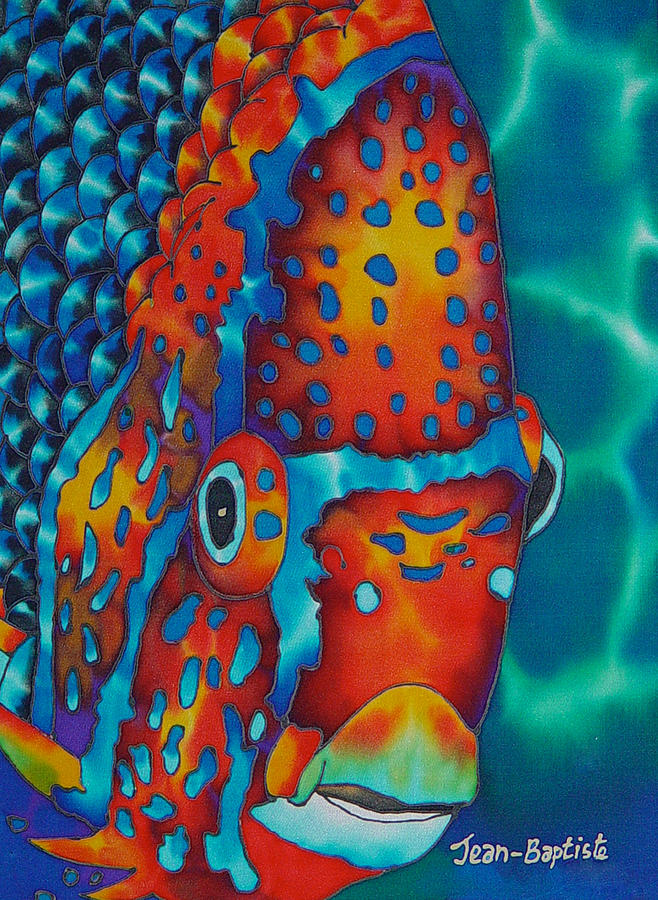 King Angelfish is a painting by Daniel Jean-Baptiste which was uploaded on June 18th, 2012.

Coral reef fish are fish which live amongst or in close relation to coral reefs. Coral reefs form complex ecosystems with... more

Coral reef fish are fish which live amongst or in close relation to coral reefs. Coral reefs form complex ecosystems with tremendous biodiversity. Among the myriad inhabitants, the fish stand out as colourful and interesting to watch. Hundreds of species can exist in a small area of a healthy reef, many of them hidden or well camouflaged. Reef fish have developed many ingenious specialisations adapted to survival on the reefs.
Coral reefs occupy less than one percent of the surface area of the world oceans, but still they provide a home for 25 percent of all marine fish species. Reef habitats are a sharp contrast to the open water habitats that make up the other 99% of the world oceans.
However, loss and degradation of coral reef habitat, increasing pollution, and overfishing including the use of destructive fishing practices, are threatening the survival of the coral reefs and the associated reef fish.
Reef fish have also evolved complex adaptive behaviours. Small reef fish get protection from predators by hiding in reef crevices or by shoaling and schooling. Many reef fish confine themselves to one small neighbourhood where every hiding place is known and can be immediately accessed. Others cruise the reefs for food in shoals, but return to a known area to hide when they are inactive. Resting small fish are still vulnerable to attack by crevice predators, so many fish, such as triggerfish, squeeze into a small hiding place and wedge themselves by erecting their spines.
As an example of the adaptations made by reef fish, the yellow tang is a herbivore which feeds on benthic turf algae. They also provide cleaner services to marine turtles, by removing algal growth from their shells. They do not tolerate other fish with the same colour or shape. When alarmed, the usually placid yellow tang can erect spines in its tail and slash at its opponent with rapid sideways movements.

Congratulations on your new sale Daniel!

I would like to thank this collector from Florida for choosing my work.

I would like to thanks the buyer from Haiku, Hawaii.

What a wonderfully steady hand you must have, and the control of your colors.......doing this on silk......sooooo impressed. And congratulations on your sale.

Love the bright colours! Congratulations on your sale, Daniel.

Surreal and very vibrant! Congrats on your sale!

This is a fun one, with lovely detail and colors. Good Job.

Congratulations on your new $ale

Beautiful work, congratulations on your sale!

Hi Shirley, yes it still is. I have a 100 acre forest with beautiful wild parrots.

It must have been like the Garden of Eden where you used to live, Daniel. Your paintings are superb!.....vote. (Please excuse above error)

It must be like the Garden of Eden where you lived, Daniel. Your paintings are supberb!

Daniel, your use of color is fantastic! What an incredible portfolio! :-)