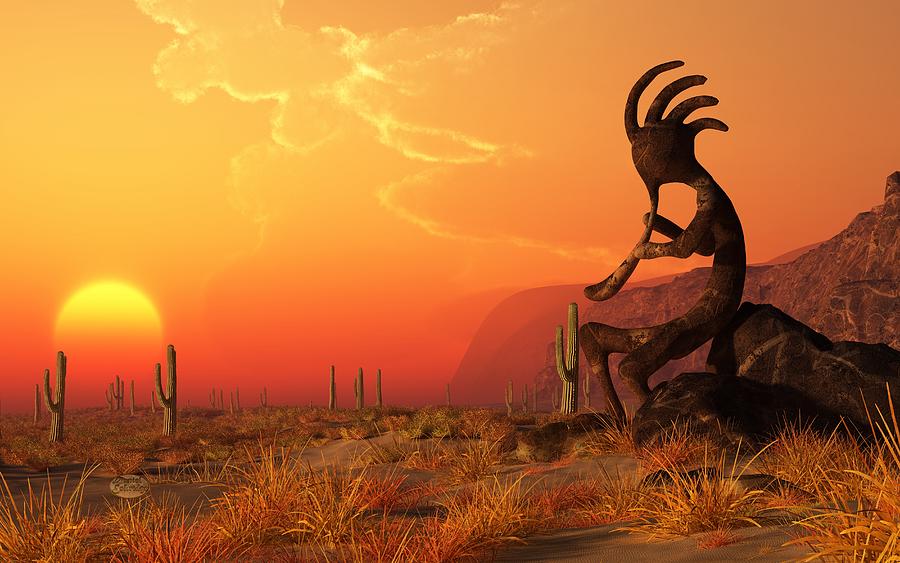 Kokopelli Sunset is a piece of digital artwork by Daniel Eskridge which was uploaded on November 6th, 2013.

A giant stone Kokopelli statue sit on some rocks in a desert. The red sunset illuminates the arid valley which is filled with yellow grasses and... more

A giant stone Kokopelli statue sit on some rocks in a desert. The red sunset illuminates the arid valley which is filled with yellow grasses and cacti. The right side of the image is dominated by rocky mesas.

Kokopelli occasionally makes appearances in some of my Native American themed art. He is a common symbol of several tribes of American Indians of the Southwest. This is the first time, however, where I made the fertility deity the main subject of a work.

About how I create my artwork:

Rather than traditional forms of art such as painting or photography, I use a computer to create my images. It's called 3D Rendering and works like so: I make a scene by sculpting and arranging digital models in a virtual 3D space. After stipulating lighting and atmospheric effects, I have the computer create a simulated environment from which I take a virtual snap shot of the scene. Then, using image editing software and something more akin to traditional painting techniques (via a Wacom tablet), I go over the work adjusting colors, adding brushwork, painting in details, etc. to produce the final image. Software I use includes: Sculptris, ZBrush, Blender3d, Vue, Daz Studio, and GIMP.

Thanks for looking!
Daniel Eskridge

Beautiful. Congrats on your recent sale!

Many thanks to the buyer from AZ!

The buyer of this great artwork left a nice review on the buyer's reviews page. I thought you'd like to see it. https://fineartamerica.com/buyercomments.html God bless!

Love this and Kokopelli! Congratulations!

I'm tempted to have this myself. Definately in love. Adding to favorites!

Many thanks to the buyer from WA!

What a great image! Congrats on your sale!

Many thanks to they buyer from California!