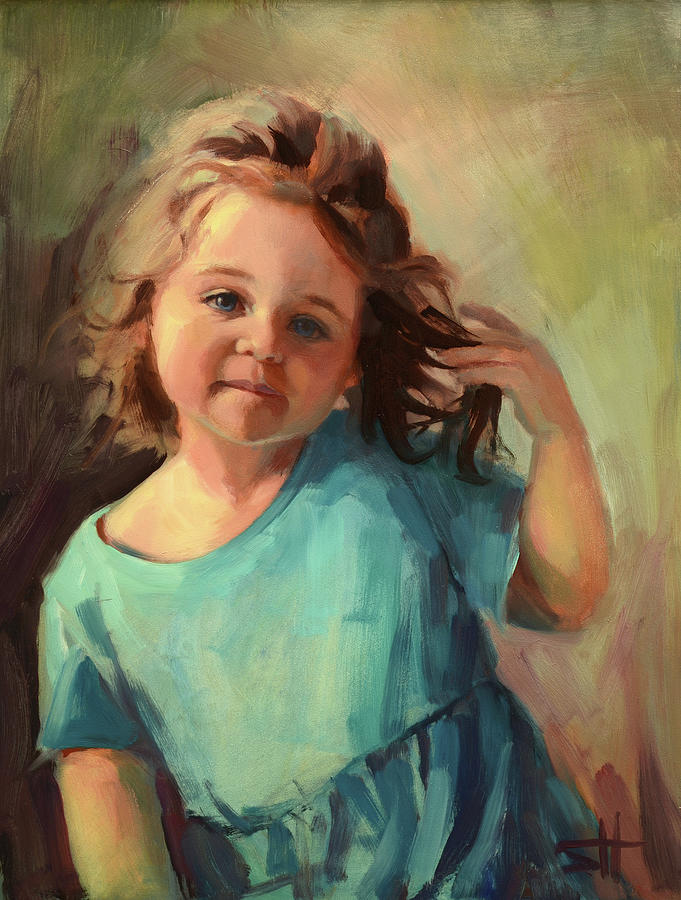 Kymberlynn is a painting by Steve Henderson which was uploaded on August 23rd, 2017.

The world of a young child is one of imagination and play. Innocence shines from the eyes. ... more

The world of a young child is one of imagination and play. Innocence shines from the eyes.

Too often, we adults look at children, especially very young ones, and sigh in exasperation at their willfulness, their “naughtiness,” their constantly doing things that provoke the automatic response in us, “No, don’t do that!” (Most of the time, if we stopped and thought, we’d ask ourselves, “Is it really so bad, what they’re doing? Could I possibly say, ‘Yes, that’s fine what you’re doing.’?”

Oftentimes, children are viewed through the harsh spectacles of religious expectation, and some people (too many people, actually) believe that they are born sinful, evil, tainted by Adam’s sin. Inherently bad, they need to be corrected by us adults into goodness, but given how most of us adults tend to consistently be impatient, irritable, and exacting, one wonders how children are supposed to improve by doing everything that we say.

Jesus, who knew a few things about humanity and how we operate, constantly directed his disciples’ eyes toward children, admonishing them to imitate those very children who were as little valued and appreciated in that culture as they are in ours today. “The Kingdom of Heaven belongs to such as these,” He said.

How could He have said that if children were so singularly and consistently awful? Is it possible that there are things about children – such as their innocence, their sense of trust, their lack of affectation, their inability to judge others on the superficial materialistic standards that the adult world so frequently uses – that Jesus wants us to emulate?

The artwork, Kymberlynn, invites the viewer to join in the world of the child, to see the world with a simple, innocent joy, and to appreciate – and yes, even imitate – the actions of the little ones we encounter every day. Next time, instead of overlooking the little child in our endeavor to do whatever important project we have in front of us, why not stop and watch him or her? There’s something about children that the God who made them sees as very, very special.

This is such a beautiful portrait of this delightful young girl. Love it and your great description! v/f

These are all so beautiful! Lf

Adorable - fun, beautiful, captures it all!

This is so cute! You really captured this little girl's expression, and the gesture with her hand to her hair -- wonderful! L/F

Thank you, Lori. It is the little details, subtleties that can make all the difference.

Such a beautiful portrait :)

Beautiful. Her innocence shines through!