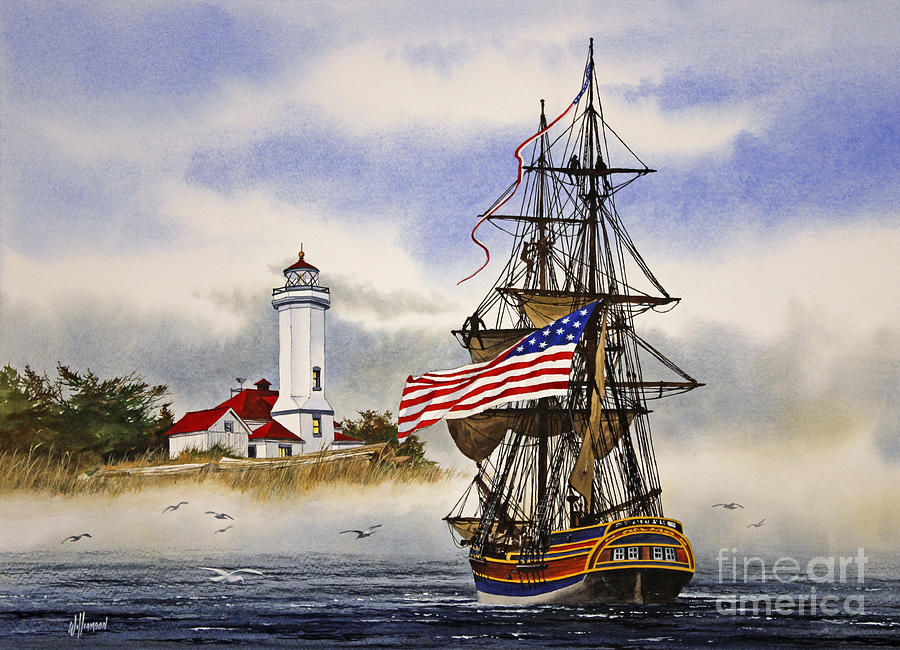 Lady Washington at Point Wilson Lighthouse is a painting by James Williamson which was uploaded on August 31st, 2014.

Lady Washington at Point Wilson Lighthouse
The original Lady Washington, or more commonly, Washington, was a 90-ton sloop. Her early history is still in question. As part of the Columbia Expedition, she left Boston Harbor on October 1, 1787. She sailed around Cape Horn and participated in the Maritime Fur Trade with the coastal Native Americans in the Pacific Northwest and in tea and porcelain across the Pacific in China. She was the first American-flagged vessel to round Cape Horn. She was the first recorded vessel to make landfall on the Oregon coast near Tillamook, Oregon. John Meares claimed that she was the first non-native vessel to circumnavigate Vancouver Island.
Named in honor of Martha Washington, she was captained by Robert Gray, and later by John Kendrick, former captain of her larger sailing partner, the Columbia Rediviva and commander of the expedition. At the end of the first trading season Kendrick ordered Gray to sail Columbia to China while Kendrick took command of Washington. Under the command of Kendrick, she was refitted in Macau as a brigantine.
The Washington became the first American vessel to reach Japan in an unsuccessful attempt to move some unsold pelts. Washington remained in the Pacific trade and eventually foundered in the Philippines in 1797. She was lost at the mouth of the Mestizo River, near Vigan, NW Luzon in July 1797.
Lady Washington (20th century replica)
A ship replica of the Lady Washington was built in Aberdeen, Washington, United States in time for the 1989 Washington State Centennial celebrations. Aberdeen is located on Grays Harbor, an inlet of the Pacific Ocean named for Robert Gray, the man who discovered the harbor as Master of the Columbia.
Named "Washington State's Tall Ship Ambassador", as well as the State Ship, the new Lady Washington has already made plenty of her own history. Operated by a professional and volunteer crew under the auspices of the Grays Harbor Historical Seaport Authority, she sails up and down the Pacific coast reaching out to sailors and lubbers of all ages through the romance of the sea in the hope that they take a little of her history back with them.
Today she sails regularly in pair with the Hawaiian Chieftain, educating students in the history of merchant trading, life of common sailors, and responsibilities of the ship's officers.
Film and television appearances
Lady Washington has appeared in various films, portraying HMS Interceptor in the film Pirates of the Caribbean: The Curse of the Black Pearl and the brig Enterprise, a namesake of the Starship Enterprise, on the holodeck in Star Trek Generations. She provided the basis for the RLS Legacy in the Disney animated feature Treasure Planet. She also transported Chinese immigrants to America in the IMAX film The Great American West. On television, the ship played a prominent role in the miniseries Blackbeard (2006 film), and has appeared in the music video for rapper Macklemore's Can't Hold Us and as Captain Hook's ship on Once Upon a Time.
Career and General Characteristics
Name: Lady Washington; Operator: Grays Harbor Historical Seaport Authority; Builder: Ray Wallace, designer; Richard Miles, shipwright; Laid Down: 1987; Launched: March 7, 1989; Homeport: Aberdeen, Washington, United States; Honors: State of Washington tall ship ambassador; Awards: Washington State Ship; General Characteristics: Class & Type: Brig; Tons Burthen: 178 tons; Length: 68 ft (LOD), 58 ft (waterline), 112 ft (sparred); Height: 90 ft (rig height); Draft: 11 ft; Sail Plan: Brig, 4, 400 sq ft; Notes: Douglas Fir Hull

Point Wilson Lighthouse
Point Wilson, a point north of Port Townsend on the Strait of Juan De Fuca and Admiralty Inlet, once the haunt of Indians who brought their canoes to rest on its shores, is now the sight of a magnificent lighthouse. The first structure was a 46-foot wood frame tower rising from the keepers dwelling, with a fog signal unit attached. To differentiate the sentinel from the one on Admiralty Head, the fixed white light in the lantern was varied by a red flash every 20 seconds.
Point Wilson Lighthouse is important to commerce. In 1913 the lighthouse was upgraded and improved. A concrete structure with an octagonal tower rising 51 feet above the water was built. The fog signal was upgraded to a chime diaphragm. Still in mint condition, the lighthouse continues its vigil and continues to maintain Coast Guard personnel. An important radio beacon is on the site.
A share of vessels has met with mishap near Point Wilson, however the lighthouse has been a greeting to mariners ever since its establishment. The lighthouse is the welcoming light for the entire Puget Sound area and continues this important role today.
Point Wilson Lighthouse is located on a breathtaking sand spit. Once the site of Fort Worden, now abandoned, visitors can explore the remains of the fort, walk through tall beach grass and linger among fields of driftwood and rocky sandy beaches. On a clear day Mt. Baker, the Olympic Mountains and Mt. Rainier can be seen across the sparkling waters. Ships, sailboats, Ferries and Submarines sail these waters, all feeling safer as they pass the sentinel known as Point Wilson Lighthouse.

Congratulations on your sale, James!

Your ships are fantastic! L/F

I love your work James. This is another great scene. Great colors, lighting and detail. Love the flag in front. Nice work. l/v

I love all your ship paintings with the tall sails! Your work is so meticulous & full of life....it's such a pleasure to look at. V/F/P!!! ☺

Dramatic. The bold atmosphere of this piece reminds of our national anthem.