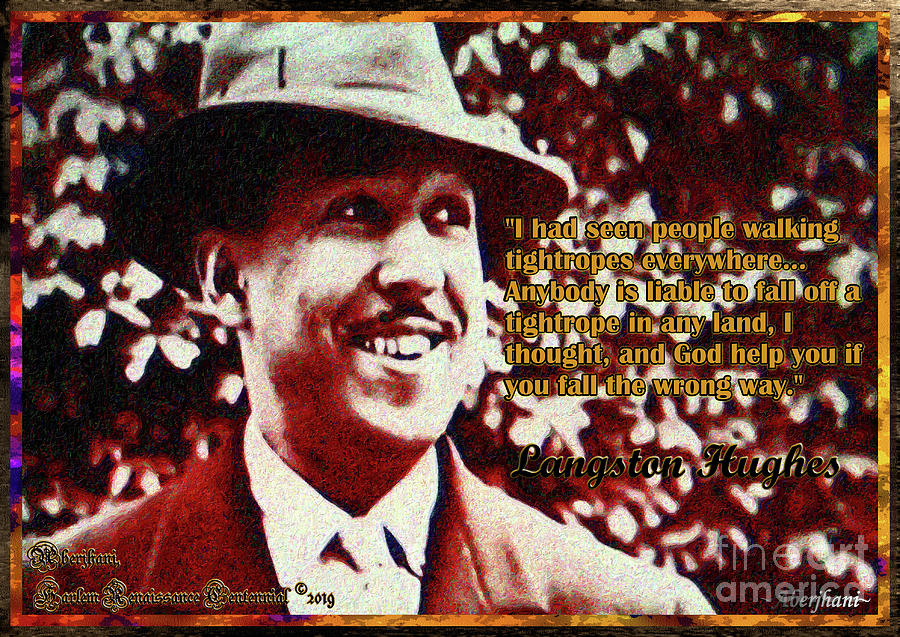 Langston Hughes Quote on People Walking Tightropes is a mixed media by Aberjhani which was uploaded on December 26th, 2018.

I had seen people walking tightropes everywhere... Anybody is liable to fall off a... more

"I had seen people walking tightropes everywhere... Anybody is liable to fall off a tightrope in any land, I thought, and God help you if you fall the wrong way."

The above quote is from Langston Hughes's I WONDER AS A I WANDER, the second volume of the great Harlem Renaissance writer's accounts of his travels around the world. These words summed up travels in 1937 after he'd logged reports on the United States, Cuba, Japan, Russia, and Spain, and then headed for Paris.

The "tightropes" to which he was referring were woven of public and private human conditions similar to those confronting many of us in the 21st century. In the extended passage from which the quote was taken, he alluded more precisely to: "the tightrope of color in Alabama, the tightrope of transition in the Soviet Union, the tightrope of repression in Japan, the tightrope of the fear of war in France--and of war itself in China and in Spain--and myself everywhere on my tightrope of words."

Replace some of the locations Hughes referenced with names like Washington DC, Yemen, Afghanistan, etc, and a certain pattern of history begins to emerge. And note please he did not say falling the "wrong way" was inevitable.

If the two dates (1901 and 1092) for Hughes's birth year caught your attention, they are there because recently-digitized news documents have indicated very strongly that the great author was born a year earlier than previously believed and stated in my own Encyclopedia of the Harlem Renaissance. I have included both dates with this post to acknowledge the finding.

My digital sepia portrait of Hughes's image was modeled after archive film footage of him. It is part of my HARLEM RENAISSANCE CENTENNIAL series, for which I plan post images throughout the year. Some (like this one) will depict actual figures, events, and places from the Harlem Renaissance while others will showcase works inspired or influenced by the Renaissance.

To save 30 percent off the mark-up on this and other Postered Chromatic Poetics artwork from now until December 31, 2018, please use promo code HSPRXZ when checking out.

Much gratitude to the CONTEMPORARY art group for featuring this Langston Hughes Harlem Renaissance quotation poster.

Thank you very much VIVA, Geraldine, Angeles, and Carol. Your visits and shared insights are greatly appreciated.

Amazing quote and portrait, Aberjhani!! A thought to be considered. L/F