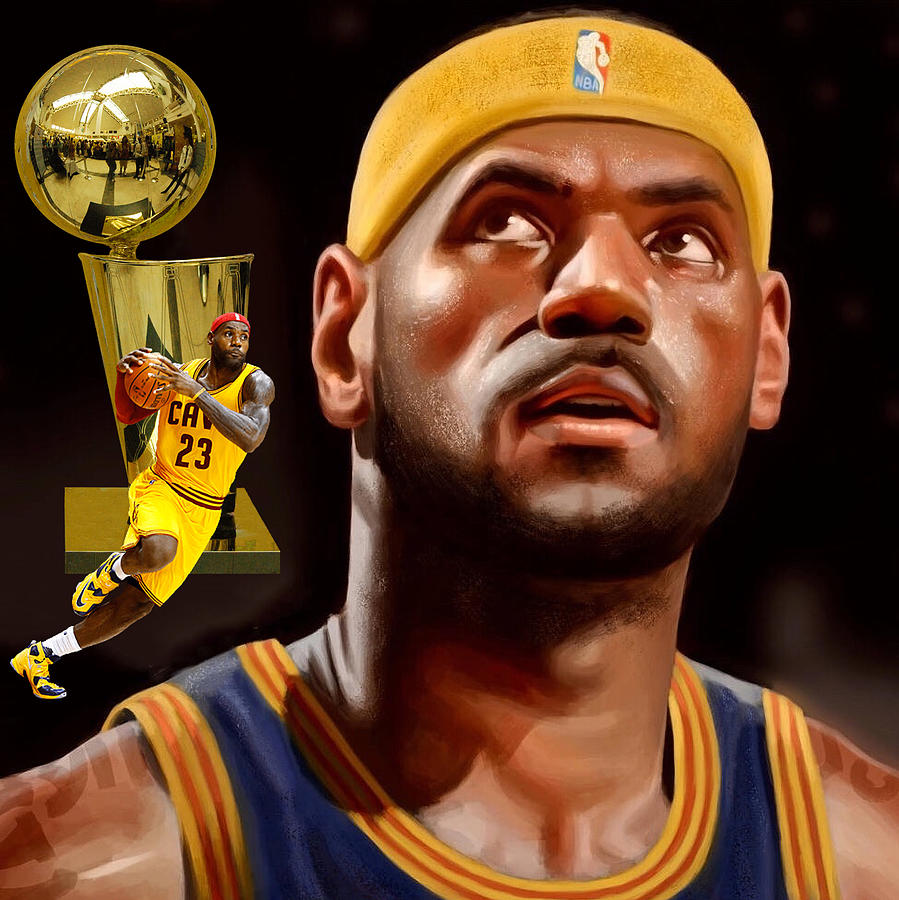 LeBron is a piece of digital artwork by Karen Showell which was uploaded on November 10th, 2018.

Lebron James was born December 30, 1984 in Akron , Ohio. His early childhood was a struggle as he often moved from one home to another with his... more

Lebron James was born December 30, 1984 in Akron , Ohio. His early childhood was a struggle as he often moved from one home to another with his teenage mother, Gloria. He began playing basketball at an early age and showed tremendous talent early in his life. James quickly made a name for himself as a freshman at St. Vincent-St. Mary’s High School. As a freshman, he was named the team’s starting small forward an averaged 20 points per game in leading histeam to a 27-0 record and the Division III State championship.

After this freshman year, Lebron took the number “23” in honor of his childhood idol, Michael Jordan. In his sophomore year, he was named “Mr. Basketball” in Ohio and averaged 25.2 points per game and led his team to its second consecutive Division III state championship. At this point, James began attracting national attention for his basketball skills and chose to stop playing football, a sport in which he also garnered All-state honors as a wide receiver. James just kept getting better as he progressed through high-school. He averaged 29 points per game as a junior and earned a spot on the All-USA First Team, and was named the 2001-02 Gatorade National Boys Basketball Player of the Year. At the age of 17, James was already 6’8″ and weighed 240 pounds. In addition, he appeared on the cover of Sports Illustrated and ESPN the Magazine and a couple of his games were nationally televised on ESPN2, making him arguably the most acclaimed high-school athlete in the history of American high school sports. Despite all of the media attention, James averaged 31.6 points per game in his senior year and was named Mr. Basketball in Ohio for the third straight year. By the time his senior year was over, James was one of the most heralded prospects in basketball history. It was a foregone conclusion that he would skip college and be taken as the number one overall pick in the NBA draft by the Cleveland Cavaliers.

Lebron James entered the NBA in 2003-2004 and had an immediate impact. During his rookie season he became the youngest person in NBA history to score 40 points in a game and became the youngest person to win the Rookie of the Year award. He averaged 20.9 points per game, 5.9 assists, and 5.5 rebounds. He was universally praised for his versatility, as he was used as a point guard, shooting guard, and small forward. His highlight-reel dunks and no-look passes thrilled his fans and earned him endorsement deals worth millions of dollars. He was also named to the U.S. Men?s Olympic Team, which earned a Bronze Medal in the 2004 Summer Olympics. In his second season, he averaged 7.2 points per game, 7.2 assists, and 7.4 rebounds per game. It wasn’t until his third season, however, that he led the Cavaliers to the playoffs. In his fifth season, he nearly single-handedly led the Cavaliers to the NBA Finals, only to be swept in four games by the San Antonio Spurs. In the Eastern Conference Finals against the Detroit Pistons, James had one of the most spectacular games in recent memory, scoring 48 points, including 29 of the Cavalier’s last 30 points! That year he averaged 27.3 points per game.
LeBron is now with the Lakers

Thank you very much