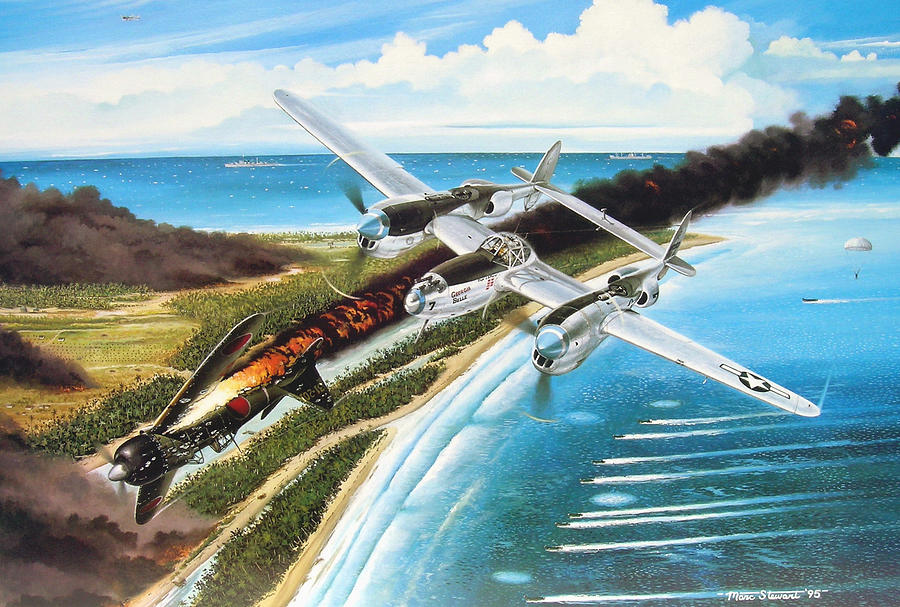 Lightning Over Mindoro is a painting by Marc Stewart which was uploaded on October 19th, 2007.

On December 20, 1944, U.S. landings began on Mindoro Island in the Philippines. While escorting a PBY to the beachhead landing, Capt. Joel B. Paris, III, leading a flight of 3 P-38 Lightnings, was jumped from above by 10 Japanese Zero (Zeke 52) fighters. Despite being hit in the cockpit area by 20mm and .51 cal. shells, Capt. Paris quickly maneuvered onto the attacking Zero\'s tail and destroyed him. As the fight continued, Capt. Paris shot another Zero from the tail of one of his wingmen. He then destroyed another Zero on the tail of his other wingman. The enemy fled the battle, and Capt. Paris\' flight continued to cover the undamaged PBY.


Capt. Paris served with the 5th Air Force, 49th Fighter Group, 7th Fighter Squadron. He flew 167 combat missions in the P-40K, P-40N, and the P-38L. Highly decorated, Capt. Paris was awarded numerous medals including: the Silver Star, the Distinguished Flying Cross with 3 clusters, the Air Medal with 7 clusters, the Purple Heart, the Asiatic-Pacific Medal with five battle stars, and the Philippine Liberation Medal with 2 battle stars. Capt. Paris finished the war with 9 confirmed victories and 7 probables. After the war he continued to serve and retired in 1970. He became the Adjutant General of Georgia in 1971, and retired in 1975 as a Major General.