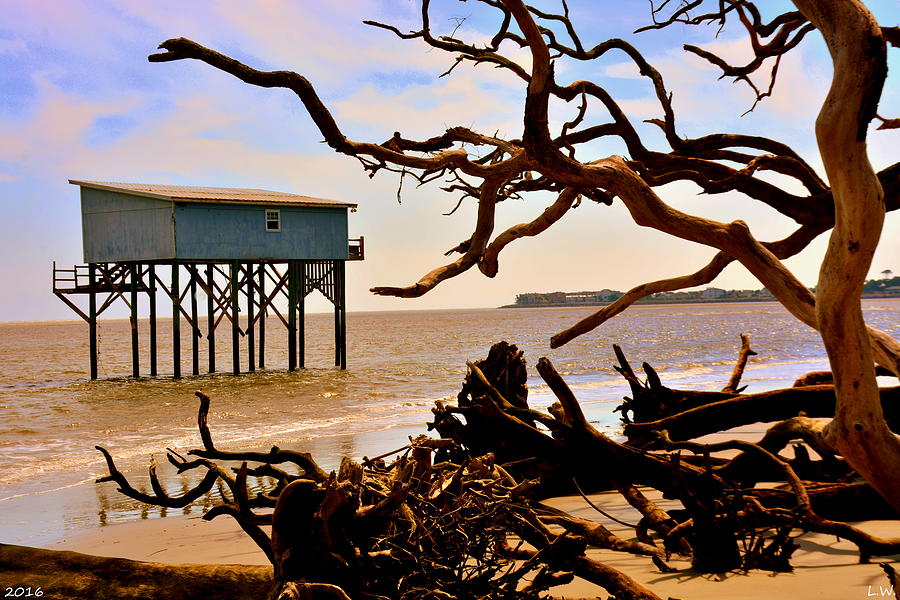 Little Blue Hunting Island State Park Beaufort SC is a photograph by Lisa Wooten which was uploaded on October 13th, 2016.

"Little Blue," one of Hunting Island's last cottages, still fighting against the sea. If these walls could swim ...

The last house standing on the southern end of Hunting Island is a quizzical sight, perched alone on pilings surrounded by the swirling sea.

The Steinmeyer family became a partner in the lease of this cabin in 1978. They called it "Big Blue." The building had been barged over from the U.S. Marine Corps base on Parris Island and added onto over the years.

The beach cottage looks intact but it has long since been vacated due to erosion. So have all but two cottages in Hunting Island State Park on the Atlantic Ocean near Beaufort.

The walls of "Little Blue" could tell many stories. Its pilings are driven deep into to the core of Beaufort County's cultural, economic and environmental history.

The last house standing reflects the stubborn will of the people of Beaufort to go down the river every weekend, rain or shine, in the wind or wilting heat.

It stands like a crab clinging to a net as a reminder of the glory days of a beach village created in the state park, where people came for decades to rejuvenate with nature.

It also is a reminder of the power of the sea, and mankind's long and losing battle to tame it, especially on the shifting sands of barrier islands. Dozens of Hunting Island cottages have been removed or crushed by the sea.

PRT: HUNTING ISLAND NOT GOING AWAY 'IF WE CAN HELP IT'

Little Blue stands as a sentinel to the new era that dawned on Hunting Island during the Great Depression and still shines brightly today.

The pristine sandy beach, natural setting and warm Atlantic Ocean make a perfect getaway. Hunting Island features a campground, which has spaces for RV's and tent campers, as well as a primitive camp site for established groups. The camping area has very easy access to the beach.

The Hunting Island historic lighthouse is the only lighthouse open to the public to climb in the state. From the top platform, one can get a breathtaking view of the ocean, beach and the marshland.

Fishing is popular in the lagoon, surf and the fishing pier which st reaches 1120 feet into the Fripp Inlet. Located at the pier entrance, is the Nature Center, which has some very nice exhibits of the local wildlife and marine life.

Nature trails, Visitor Center, natural beach and even a boat landing.. Hunting Island State Park is not just another beach...
it's a nature and wildlife paradise... right here in the USA.Hunting Island is a 5,000-acre (20 km2) secluded semitropical barrier island located 15 miles (24 km) east of Beaufort, South Carolina, United States. Since 1935, it has been classified as a state park. It is the most-visited state park facility in South Carolina and is a part of the ACE Basin estuarine reserve area. Renowned for its natural beauty, the island remains one of the few remaining undeveloped Sea Islands in the Lowcountry. The park is known for its 19th century lighthouse which bears its name. The park's unique beach has been featured in several travel publications and was listed in 2013 as a Top 25 beach in the United States by TripAdvisor.[3]

A campsite at Hunting Island
The southern terminus of U.S. Route 21 has been on Hunting Island since 1953. US 21 extended to the south end of the island until about 1980, when erosion destroyed a portion of the highway, forcing the state to create a new entrance to the park and a set of one-lane roads through the palmetto forest. US 21 now ends at the point where it formerly veered east toward the lighthouse.
Since 1980, Hunting Island has suffered major beach erosion as a result of heavy tides from the confluence of the Atlantic Ocean and Saint Helena Sound, and is expected to shrink in size by ten per cent over the next forty years. At times there is ride-able surf on the island, which is best three hours before high tide due to the large continental shelf effect on incoming waves.
In 1993, most of the Vietnam scenes in Forrest Gump were filmed on Hunting Island and neighboring Fripp Island.Google and Wikipedia

Woah, this is a very cool image!