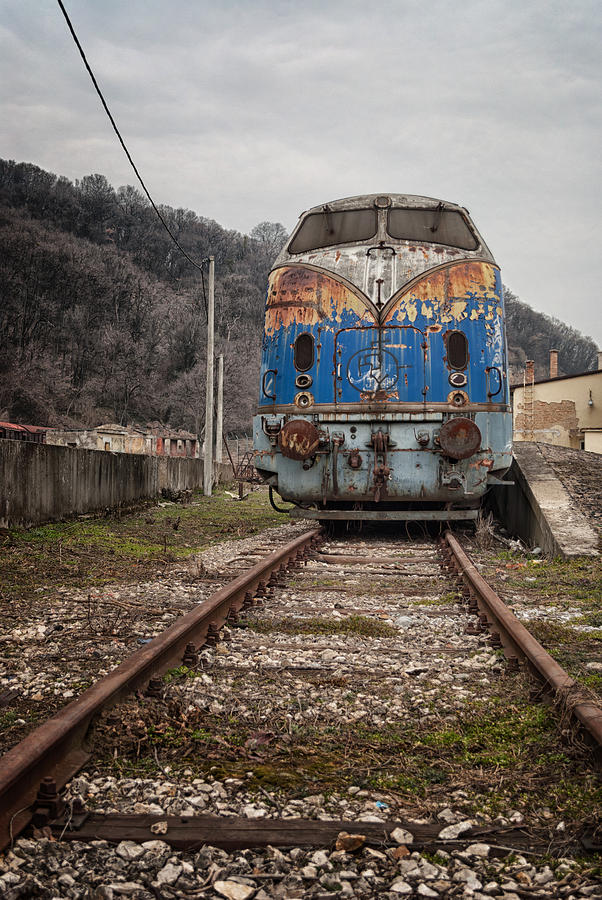 Locomotive is a photograph by Milica Ljevaja Stojanovic which was uploaded on November 14th, 2013.

The diesel-hydraulic locomotive ML 2200 C'C' was a 6 axle variant of the DB Class V 200 series of locomotives, which were built for Yugoslav State... more

The diesel-hydraulic locomotive ML 2200 C'C' was a 6 axle variant of the DB Class V 200 series of locomotives, which were built for Yugoslav State Railways (JDŽ) by manufacturer Krauss-Maffei. The JDŽ bought three units, which it initially named D 66, later these were named JŽ series 761. In 1955 the German Federal Railways (Deutsche Bundesbahn), together with the company Krauss-Maffei, took the DB Class V 200 locomotive V 200 005 on a demonstration journey to Turkey, Greece, and Yugoslavia.
The result of this was that the interest of the JDŽ in the V 200 was awakened, and in 1956 ordered three locomotives; however, on Yugoslav railways the axle load limit was 16 t; so Krauss-Maffei designed the ML 2200 C'C', a six axle version of the V 200 with correspondingly lower axle loads. This was the version that the JDŽ procured. Additionally, a more efficient cooling system than in the V 200 was installed, as Jugoslavia has a warmer climate than Germany. The main frame was welded, the basic construction and design was like that of the DB Class V 200: In the engine room the 2 Maybach MD650 engines of 1200 hp each were located, one over each bogie, each bogie being driven by a separate hydraulic transmission, Maybach Mekydro K104 . The cooling system was located between the diesel engines. Compared to a V 200 the length increased by 1.77m from 18.5m to 20.27m. The weight was 96 tonnes, giving an axle load of 16 tonnes. Maximum speed was lower than the V 200 at 120 km/h. The factory numbers of the three locomotives were 18368 to 18370. All the machines were painted blue and white. JZ D 66-001 was exhibited at the Hanover Fair in the spring of 1957 and transferred to Yugoslavia in May, being delivered to Belgrade on 27 May 1957, on the occasion of the president's 65th birthday. After a short introductory period the locomotives were chartered for the "Blue Train" the government chartered train the president Josip Broz Tito used. When not used on presidential train duties, the locomotives also hauled express trains. The locomotives were named: D66-001 was "Dinara", D66-002 "Kozara", and D66-003 "Sutjeska". The names were written in silver letters on the side walls of engines. In the 1980s the presidential locomotives were replaced by four EMD JT22CW-2.
After Tito's death in 1980 the locomotives were moved from Belgrade to the depot at Subotica were they worked as ordinary locomotives, finally being stopped in 1991.
In 1998 the locomotives were in a dilapidated condition, and by 2007 were located in Topčider (a suburb of Belgrade), where they are part of a railway museum there: the former Yugoslavian government of Yugoslavia built a special building in Topčider for them. (source: http://en.wikipedia.org/wiki/Krauss-Maffei_ML_2200_C'C')