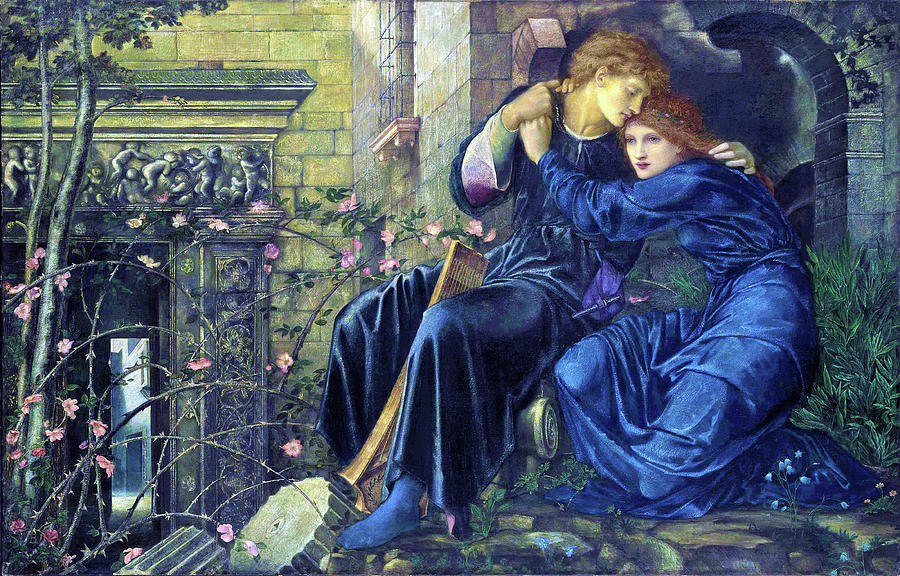 Love Among The Ruins - Digital Remastered Edition is a painting by Edward Burne-Jones which was uploaded on April 11th, 2019.

【Edward Burne-Jones】
Sir Edward Coley Burne-Jones, 1st Baronet ARA (28 August 1833 – 17 June 1898) was an English artist and designer closely associated with the later phase of the Pre-Raphaelite movement, who worked closely with William Morris on a wide range of decorative arts as a founding partner in Morris, Marshall, Faulkner & Co. Burne-Jones was closely involved in the rejuvenation of the tradition of stained glass art in Britain; his stained-glass include windows in St. Philip's Cathedral, Birmingham, St Martin in the Bull Ring, Birmingham, Holy Trinity Church, Sloane Square, Chelsea, St Peter and St Paul parish church in Cromer, St Martin's Church in Brampton, Cumbria (the church designed by Philip Webb), St Michael's Church, Brighton, All Saints, Jesus Lane, Cambridge, St Edmund Hall and Christ Church, two colleges of the University of Oxford. His stained glass works also feature in St. Anne's Church, Brown Edge, Staffordshire Moorlands and St.Edward the Confessor church at Cheddleton Staffordshire. Burne-Jones's early paintings show the heavy inspiration of Dante Gabriel Rossetti, but by the 1860s Burne-Jones was discovering his own artistic "voice". In 1877, he was persuaded to show eight oil paintings at the Grosvenor Gallery (a new rival to the Royal Academy). These included The Beguiling of Merlin. The timing was right, and he was taken up as a herald and star of the new Aesthetic Movement.

Your work is very interesting.

This is so wonderful!

This is so wonderful!

Your work is very interesting.

Congratulations on your sale of this beautiful artwork!