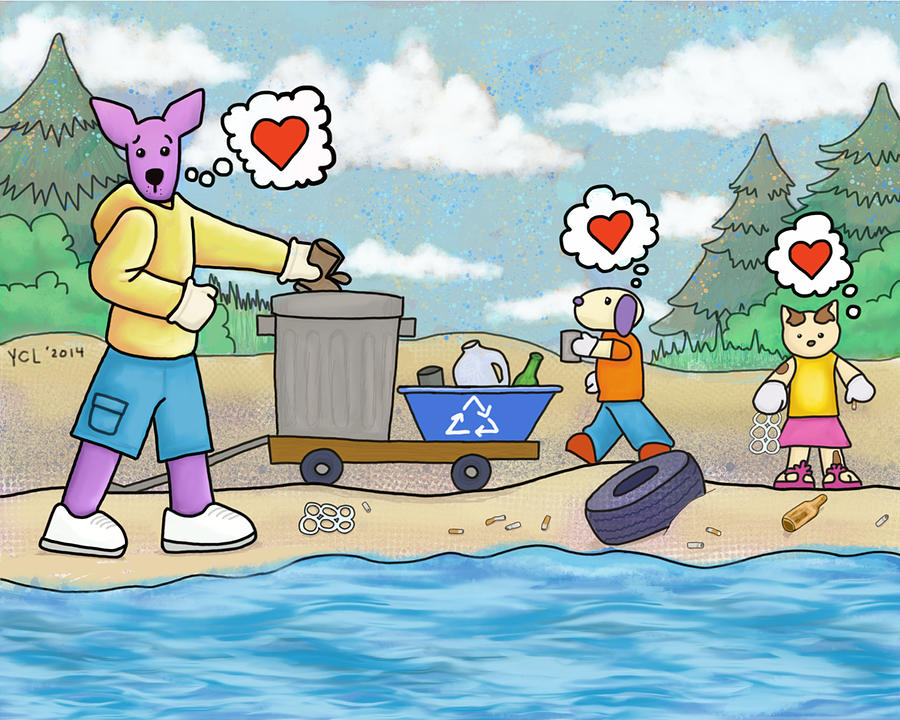 Love is Caring About the Environment is a piece of digital artwork by Yvonne Lozano which was uploaded on August 9th, 2014.

Love is Caring About the Environment

Once upon, a time The Dingo decided to go on an adventure. It was a cool brisk morning, he put on his favorite hoodie, packed a few snacks and headed... more

Love is Caring About the Environment

Once upon, a time The Dingo decided to go on an adventure. It was a cool brisk morning, he put on his favorite hoodie, packed a few snacks and headed out the door to the woods near his home.

As a young lad, he loved to explore the great outdoors. He could often be found quietly observing the wildlife, making sure not to disturb or disrupt the environment around him, and best of all, just taking in all the beauty. As he got a bit older, life got busier and busier and he spent less and less time in nature. Today, he purposed to go outside and enjoy the great outdoors!

As he made his way towards the woods. From far away he could see a big section of trees that had been cut down from the forest. In their place was a new strip mall. It was sad to think of how many beautiful trees were gone now because of this new development. This was not an uncommon theme in his town, and as the years passed by, it only seemed to be getting worse.

Now in the woods, The Dingo noticed quite a bit of litter on the ground: glass bottles, fast food containers, cigarette butts, plastic soda can rings� There was so much trash everywhere!

The Dingo had always been sensitive to the fine balance of nature. From the water in our oceans to the air in the sky, from the creepy crawly insects in the dirt to the birds that fly high, everything mattered and had it�s purpose. He knew how important it was to recycle, reuse and reduce as best as he could or knew how. After all, there really is no such thing as an unlimited resource and when resources start running out, prices go up and when prices go up those that suffer the most are generally the least fortunate of us. The Dingo realized right then and there that something had to change and change soon.

As a self proclaimed tree-hugger and friend to all woodland creatures, The Dingo went home & found the definition of the word �environment� in the Merriam-Webster dictionary:

1 : the circumstances, objects, or conditions by which one is surrounded
2 : a) the complex of physical, chemical, and biotic factors (as climate, soil, and living things) that act upon an organism or an ecological community and ultimately determine its form and survival: b) the aggregate of social and cultural conditions that influence the life of an individual or community

According to this definition, our environment is complex, we are all interconnected and what happens upstream affects those living downstream and everything and everyone in between. The Dingo knew it was time to empower the masses with the knowledge & resources to live cleaner and greener. It�s true that exploiting our natural resources can definitely help make a few people rich, but a clean, safe & thriving environment is priceless because it benefits everyone who lives in it.

The Dingo began his crusade by doing some pretty extensive research on several environmental subjects including climate change, littering, recycling, land fills, deforestation, and energy conservation, just to name a few; he wrote letters to his elected officials regarding the disappearance & neglect of the natural environment in his region and he got some of his close friends & neighbors to do the same; he arranged river & highway cleanup days with kids from local schools; and he even went as far as committing to participating in Meatless Mondays.

The Dingo smiled as the warm and fuzzy feeling of love overcame him. He knew that being environmentally aware not only impacted his neighbor next door but it also impacted his neighbors all the way on the other side of the globe and that was pretty awesome in his book.
Walk in Love.
Y.C.Lozano �2014