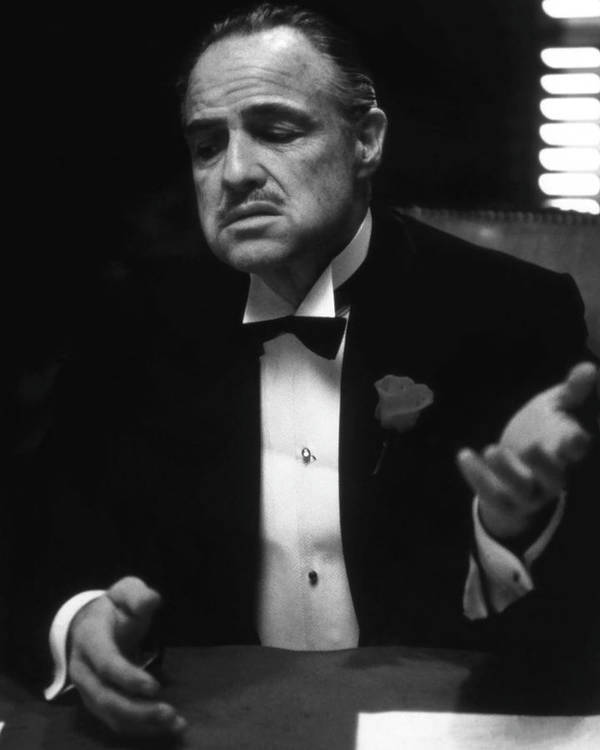 Marlon Brando As Veto Corleone In The Godfather Poster

Marlon Brando As Veto Corleone In The Godfather poster by Globe Photos.   Our posters are produced on acid-free papers using archival inks to guarantee that they last a lifetime without fading or loss of color. All posters include a 1" white border around the image to allow for future framing and matting, if desired.

Awesome black and white capture of Marlon Brando posed in a tuxedo for his role as Vito Corleone in the 1972 film The Godfather.

Great photo of a great American

I was very pleased with your art. I framed it and gave it to a fellow Year of the Dragon person for his birthday. He seemed delighted with the gift. I'll return to check out other works by Fractalicious. Thank you!

Love this artwork…. may seem in a funny spot..but my small craftsman house is so dark. I want all who visit to see it clearly. Look forward to showing to my book club friends this week! Picture helps me to feel the coolness of a beautiful Winter night.

Amazing quality. This was a birthday gift for my son, who is a forever D Rose fan, and currently coping with a severe injury. I would buy from this site again.

Lovely photo. It looks good in my son's room.

Awesome black and white capture of Marlon Brando posed in a tuxedo for his role as Vito Corleone in the 1972 film "The Godfather".The Godfather is a 1972 American crime film directed by Francis Ford Coppola, who co-wrote the screenplay with Mario Puzo, based on Puzo's best-selling 1969 novel of the same name. The film stars Marlon Brando, Al Pacino, James Caan, Richard Castellano, Robert Duvall, Sterling Hayden, John Marley, Richard Conte, and Diane Keaton. It is the first installment in The Godfather trilogy. The story, spanning from 1945 to 1955, chronicles the Corleone family under patriarch Vito Corleone (Brando), focusing on the transformation of one of his sons, Michael Corleone (Pacino), from reluctant family outsider to ruthless mafia boss.