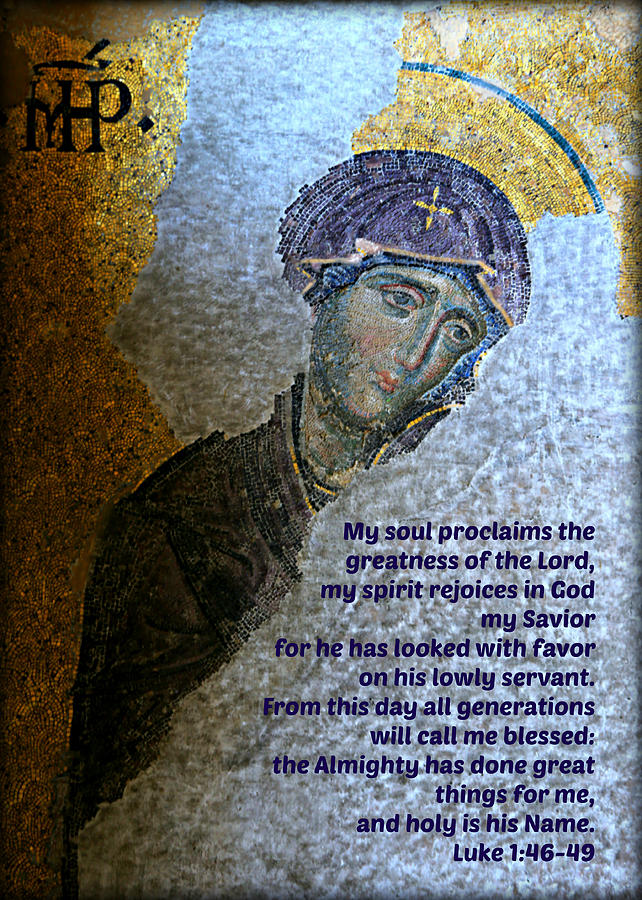 Mary's Magnificat is a photograph by Stephen Stookey which was uploaded on July 29th, 2014.

Part of the Deesis Mosaic inside Istanbul's Hagia Sophia, Mary, the mother of Jesus, is depicted paying homage to her son at the Last Judgement. ... more

Part of the Deesis Mosaic inside Istanbul's Hagia Sophia, Mary, the mother of Jesus, is depicted paying homage to her son at the Last Judgement. Mary's face bears the weight of humanity in the final moments of Judgement Day.

The opening lines to Mary's prayer of praise, 'The Magnificat', as found in the first chapter of Luke's Gospel, is added to the image.

Once the largest church in Christendom, the Hagia Sophia was transitioned to a mosque, and much later to a museum, following the Seljuk Turks conquest of Constantinople in 1453. The immense church, at the time of conquest the seat of the Patriarch of Constantinople and the primary church in Eastern Christianity, was once filled with Christian mosaics, frescoes, art and symbols. Following the 1453 conversion, the Byzantine images were whitewashed over or removed. A few remnants were later recovered and are now on display for visitors.

The current structure dates back to Emperor Justinian, inaugurated in 537 CE. Installation of mosaics began under Justinian II (565-578). The Deesis Mosaic featured here dates to the 12th century.

The present Hagia Sophia replaced two previous churches on the site: the first completed in 360 under Emperor Constantine II & the second completed under Theodosius II in 415.

This image is sized to fit FAA's greeting card format.

Thank you to the recent buyer in Oak Island, NC!

Thank you to the recent buyer in Berkeley, CA!

Nice ! Congratulations on your sale !

congratulations on the sale

CONGRATS on your sale

Lovely image, congratulations on your sale!

Congratulations on your sale! Beautiful work!

Congrats on your sale, Stephen!