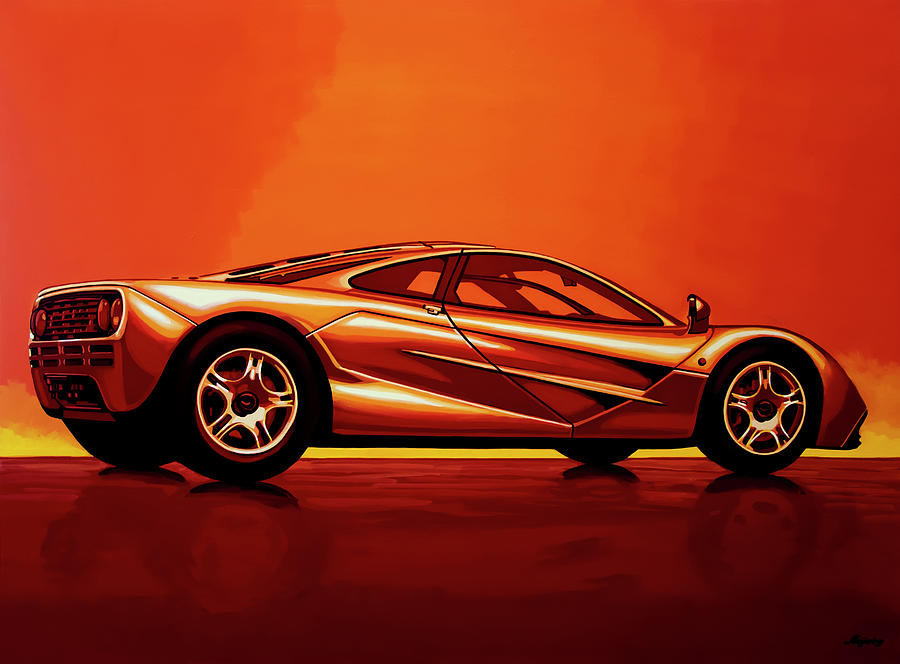 Realistic acrylic painting of the supercar the McLaren F1, painted by the Dutch fine artist Paul Meijering - the Original painting is 120 x 90 cm and... more

Realistic acrylic painting of the supercar the McLaren F1, painted by the Dutch fine artist Paul Meijering - the Original painting is 120 x 90 cm and SOLD

The car features numerous proprietary designs and technologies; it is lighter and has a more streamlined structure than many modern sports cars, despite having one seat more than most similar sports cars, with the driver's seat located in the centre (and slightly forward) of two passengers' seating positions, providing driver visibility superior to that of a conventional seating layout. It features a powerful engine and is somewhat track oriented, but not to the degree that it compromises everyday usability and comfort. It was conceived as an exercise in creating what its designers hoped would be considered the ultimate road car. Despite not having been designed as a track machine, a modified race car edition of the vehicle won several races, including the 24 Hours of Le Mans in 1995, where it faced purpose-built prototype race cars. Production began in 1992 and ended in 1998. In all, 106 cars were manufactured, with some variations in the design.

In 1994, the British car magazine Autocar stated in a road test regarding the F1, "The McLaren F1 is the finest driving machine yet built for the public road." They further stated, "The F1 will be remembered as one of the great events in the history of the car, and it may possibly be the fastest production road car the world will ever see." In 2005, Channel4 placed the car at number one on their list of the 100 greatest cars, calling it "the greatest automotive achievement of all time". Notable past and present McLaren F1 owners include Elon Musk, Jay Leno, and the Sultan of Brunei.

Congratulations, your work is Featured in "All Automotive Artworks" I invite you to place it in the group's "2020 Featured Image Archive" Discussion!! L/Tweet

Congratulations on being featured in the FAA Group 'Promote Your Work Here and Get Noticed.' To ensure your feature remains available over time, post your featured image(s) in the Group's featured image archive (l/f and pinned, www.pinterest.ca/tendrelimages/00-promote-your-work-here-get-noticed/)

Thank you so much, Robyn, for all your support, compliments and the feature in your wonderful group!!;-))...