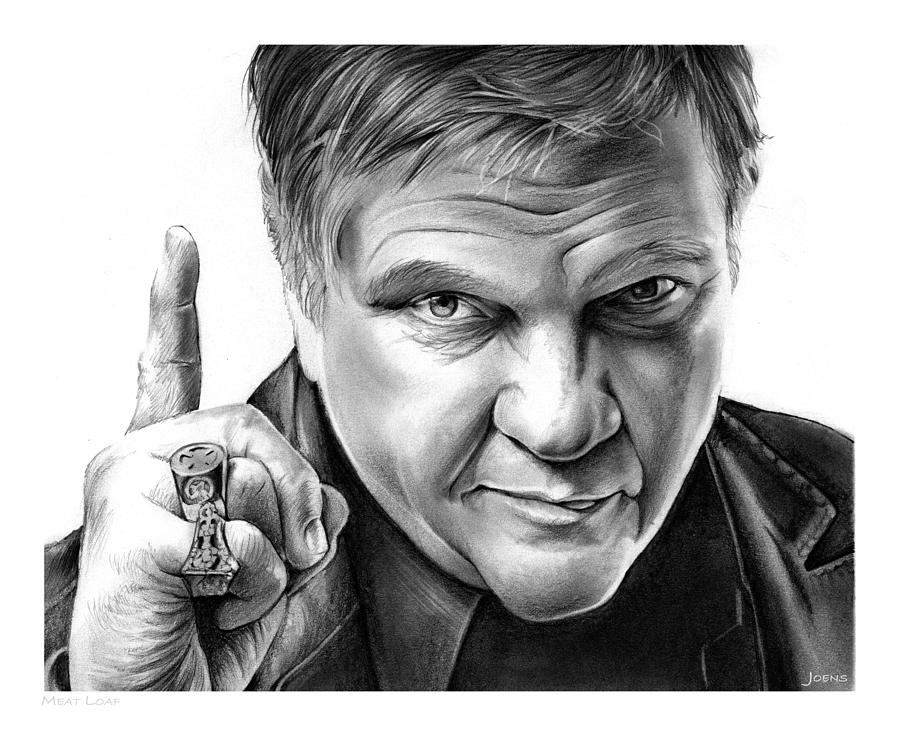 Meat Loaf is a drawing by Greg Joens which was uploaded on June 17th, 2016.

Michael Lee Aday (born Marvin Lee Aday; September 27, 1947) is an American musician, singer, songwriter, record producer and actor usually known by his stage name Meat Loaf. He is noted for the Bat Out of Hell trilogy of albums, consisting of Bat Out of Hell, Bat Out of Hell II: Back into Hell, and Bat Out of Hell III: The Monster is Loose. Bat Out of Hell has sold more than 43 million copies worldwide. Almost 40 years after its release, it still sells an estimated 200,000 copies annually, and stayed on the charts for over nine years, making it one of the best selling albums of all time. He is also known for his powerful wide-ranging operatic voice and theatrical live performances.

After he enjoyed success with Bat Out of Hell and Bat Out of Hell II: Back Into Hell and earned a Grammy Award for Best Solo Rock Vocal Performance for the song "I'd Do Anything for Love", Meat Loaf experienced some initial difficulty establishing a steady career within the United States. However, he has retained iconic status and popularity in Europe, especially the United Kingdom where he received the 1994 Brit Award for Best selling album and single, appeared in the 1997 film Spice World, and ranks 23rd for the number of weeks spent on the UK charts as of 2006. He ranked 96th on VH1's "100 Greatest Artists of Hard Rock".

He is one of the best-selling music artists of all time, with worldwide sales of more than 80 million records.[4] He has also appeared in over 50 movies and television shows,[5] sometimes as himself or as characters resembling his stage persona. His most notable roles include Eddie in the The Rocky Horror Picture Show (1975), Robert "Bob" Paulson in David Fincher's Fight Club (1999) and "The Lizzard" in The 51st State (2002). He has also appeared in several television shows such as Monk, Glee, South Park, House, M.D. and Tales from the Crypt as a guest actor.