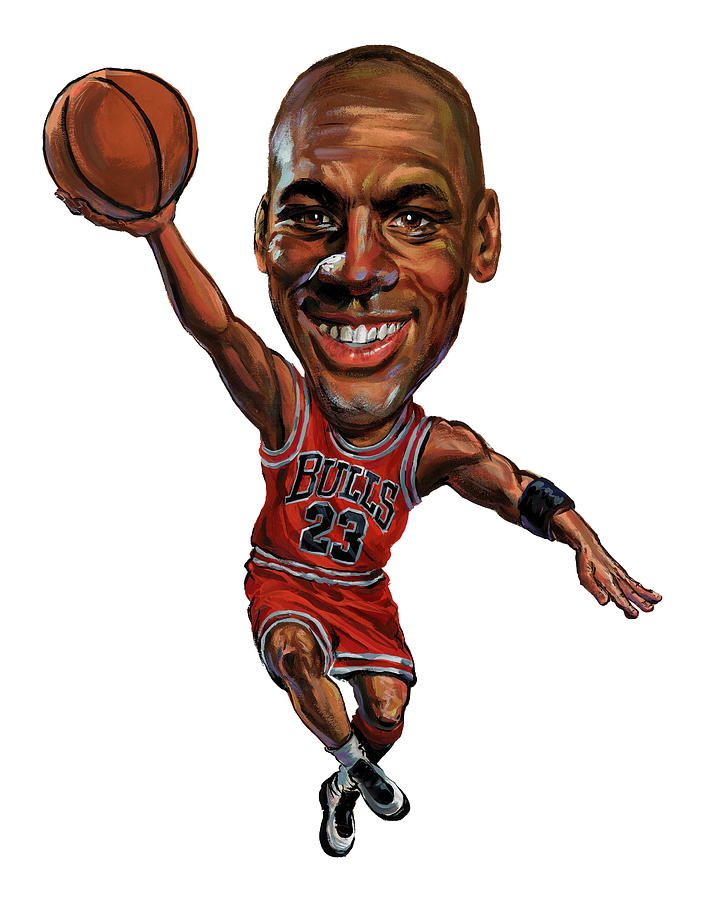 Michael Jordan is a painting by Art which was uploaded on January 17th, 2011.

Michael Jeffrey Jordan (born February 17, 1963) is a former American professional basketball player, active entrepreneur, and majority owner of the Charlotte Bobcats. His biography on the National Basketball Association (NBA) website states, "By acclamation, Michael Jordan is the greatest basketball player of all time." Jordan was one of the most effectively marketed athletes of his generation and was considered instrumental in popularizing the NBA around the world in the 1980s and 1990s. After a three-season career at the University of North Carolina at Chapel Hill, where he was a member of the Tar Heels' national championship team in 1982, Jordan joined the NBA's Chicago Bulls in 1984. He quickly emerged as a league star, entertaining crowds with his prolific scoring. His leaping ability, illustrated by performing slam dunks from the free throw line in slam dunk contests, earned him the nicknames "Air Jordan" and "His Airness". He also gained a reputation for being one of the best defensive players in basketball. In 1991, he won his first NBA championship with the Bulls, and followed that achievement with titles in 1992 and 1993, securing a "three-peat". Although Jordan abruptly retired from basketball at the beginning of the 1993�94 NBA season to pursue a career in baseball, he rejoined the Bulls in 1995 and led them to three additional championships (1996, 1997, and 1998) as well as an NBA-record 72 regular-season wins in the 1995�96 NBA season. Jordan retired for a second time in 1999, but returned for two more NBA seasons from 2001 to 2003 as a member of the Washington Wizards. Jordan's individual accolades and accomplishments include five MVP awards, ten All-NBA First Team designations, nine All-Defensive First Team honors, fourteen NBA All-Star Game appearances, three All-Star Game MVP awards, ten scoring titles, three steals titles, six NBA Finals MVP awards, and the 1988 NBA Defensive Player of the Year Award. He holds the NBA records for highest career regular season scoring average (30.12 points per game) and highest career playoff scoring average (33.45 points per game). In 1999, he was named the greatest North American athlete of the 20th century by ESPN, and was second to Babe Ruth on the Associated Press's list of athletes of the century. He was inducted into the Basketball Hall of Fame in 2009. Jordan is also noted for his product endorsements. He fueled the success of Nike's Air Jordan sneakers, which were introduced in 1985 and remain popular today. Jordan also starred in the 1996 feature film Space Jam as himself. He is the majority owner and head of basketball operations for the NBA's Charlotte Bobcats, having won a bidding war to buy controlling interest in the team from founding owner Robert L. Johnson. Jordan is sometimes referred to simply by his initials MJ. Source: Wikipedia

THIS WORK IS WORTH PART OF MOST INFLUENCING COLLECTION WITH A ABSTRACTIVE CONTENT. I ENJOY THE FLOW, THE WORK PUT INTO IT...& YOUR FLUX WITH US HERE ! Lets talk enough about good stuff like this.