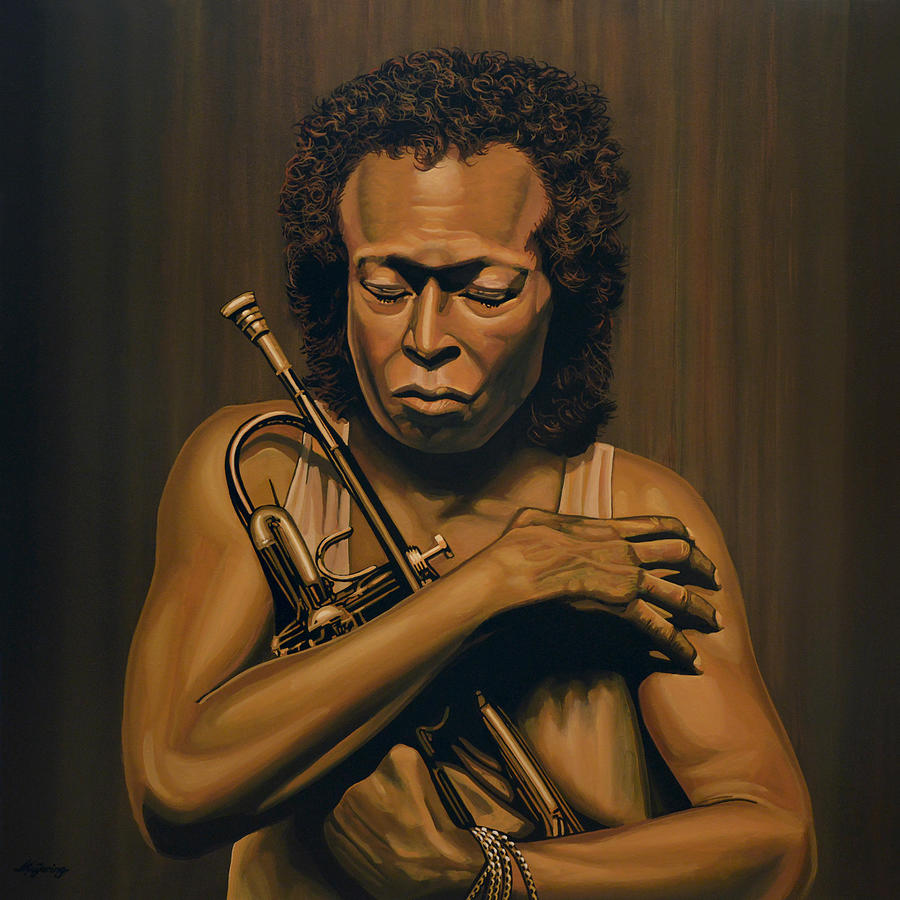 Miles Davis Painting is a painting by Paul Meijering which was uploaded on December 9th, 2015.

Miles Dewey Davis III (May 26, 1926 - September 28, 1991) was an American jazz musician, trumpeter, bandleader, and composer. Widely considered one of the most influential and innovative musicians of the 20th century, Miles Davis was, together with his musical groups, at the forefront of several major developments in jazz music, including bebop, cool jazz, hard bop, modal jazz, and jazz fusion.

In 2006, Davis was inducted into the Rock and Roll Hall of Fame, which recognized him as "one of the key figures in the history of jazz". In 2008, his 1959 album Kind of Blue received its fourth platinum certification from the Recording Industry Association of America (RIAA), for shipments of at least four million copies in the United States. On December 15, 2009, the U.S. House of Representatives passed a symbolic resolution recognizing and commemorating the album Kind of Blue on its 50th anniversary, "honoring the masterpiece and reaffirming jazz as a national treasure"

I had previously contacted Paul concerning this piece. I had the good fortune to see Miles preform live at the Concord Pavillion CA, (An open air stage, with gently rolling grass covered hills serving as seating.) I directed my friend to avoid the front area and follow me to the far right side of the stage. Being an ex-rodie, I had figured out which amp etc. must be for miles. Sure enough Miles preformed at this spot so were were kicking back on the grass about 25 feet from the stage. I pointed out to Paul that when Miles was feeling depressed (He had serious issues with this.) He would cluch the (Corenet?) tightly after a number. A bit later he would be feeling better and not show the obvious emotions depicted here. >In short, Paul conveyed all of this sad aspect of the mans art / life /story in one "Snap shot". 'Nuff said.< Morgan

This is stunning work, Paul! l/f

What a unique portrait!

Thank you so very much, John, for your support and the feature in your exciting group!!...;-))

Congratulations on this marvellous painting being FEATURED in “PAINTING THE OLD WAY” , L/F….group administrator, John Malone

Thank you so very much, John, for your compliment, support and the feature in your marvellous group!!...;-))

Thank you so very much, Robyn, for your compliment, support and the feature in your wonderful group!!...;-))

Congrats! Your image has been featured on The Art Shoppe Cafe group homepage! Thank you for sharing your beautiful work with us! F/L 12.23.15

Thank you so very much, Jaqueline, for your compliment, support and the feature in your fantastic group!!...;-))

Incredible work once again. You have some amazing talent my friend.

Thank you very much, Alexander, for your compliment and kind words!!...;-))