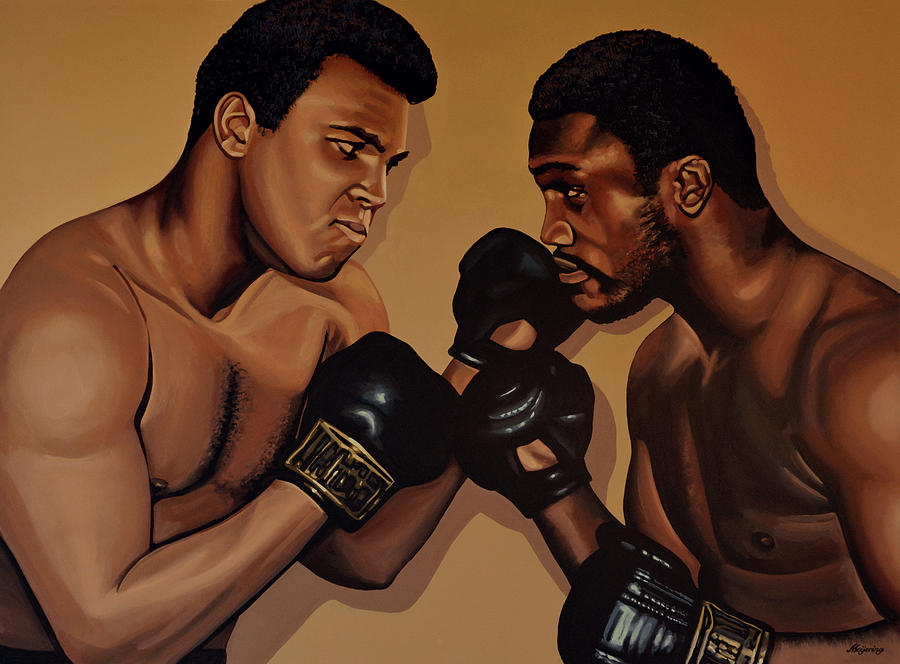 Muhammad Ali and Joe Frazier is a painting by Paul Meijering which was uploaded on January 7th, 2014.

Realistic acrylic painting of Muhammad Ali versus Joe Frazier, painted by the Dutch fine artist Paul Meijering - The Original painting is 90 x 120 cm and for sale

Muhammad Ali, (born Cassius Marcellus Clay, Jr., January 17, 1942 – June 3, 2016) was an American professional boxer. Early in his career, Ali was known for being an inspiring, controversial and polarizing figure both inside and outside the boxing ring.

Ali (as Clay) began training at age 12. At 22, he won the world heavyweight championship from Sonny Liston in an upset in 1964. Shortly after that, Ali joined the Nation of Islam and changed his name. He converted to Sunni Islam in 1975, and then embraced the teachings of Sufism in 2005. Ali retired from boxing permanently in 1981.

In 1967, three years after winning the heavyweight title, Ali refused to be conscripted into the U.S. military, citing his religious beliefs and opposition to American involvement in the Vietnam War. He was eventually arrested and found guilty of draft evasion charges and stripped of his boxing title, which he successfully appealed in the the Supreme Court of the country where, in 1971, his conviction was overturned. Due to this hiatus, he had not fought again for nearly four years — losing a time of peak performance as an athlete. Ali's actions as a conscientious objector to the war made him an icon for the larger counterculture generation.

Ali remains the only three-time lineal world heavyweight champion; he won the title in 1964, 1974, and 1978. Between February 25, 1964, and September 19, 1964, Ali reigned as the heavyweight boxing champion. Nicknamed "The Greatest", he was involved in several historic boxing matches. Notable among these were the first Liston fight, three with rival Joe Frazier, and "The Rumble in the Jungle" with George Foreman, in which he regained titles he had been stripped of seven years earlier.

Frazier emerged as the top contender in the late 1960s, defeating opponents that included Jerry Quarry, Oscar Bonavena, Buster Mathis, Eddie Machen, Doug Jones, George Chuvalo and Jimmy Ellis en route to becoming undisputed heavyweight champion in 1970, and followed up by defeating Muhammad Ali by unanimous decision in the highly anticipated "Fight of the Century" in 1971. Two years later Frazier lost his title when he was knocked out by George Foreman. He fought on, beating Joe Bugner, losing a rematch to Ali and beating Quarry and Ellis again.

This is cool. And Congrats on your sale!

I was so hoping for this, big fan!, Featured in This Way Arts!

Congratulations on being featured in Art In Motion Group!

Two of the best to ever do it. Great work

Congratulations on your outstanding artwork! It has been chosen to be FEATURED in the group “500 VIEWS.

Thank you so much, Mariola, for your compliment, support and the feature in your group!!;-))

I so much love the facial expression of them both, nicely done.

Featured in The Creators Guild, another masterpiece by a highly talented member/bravo

Thank you so much, Ronda, for the feature and compliments!...;-))