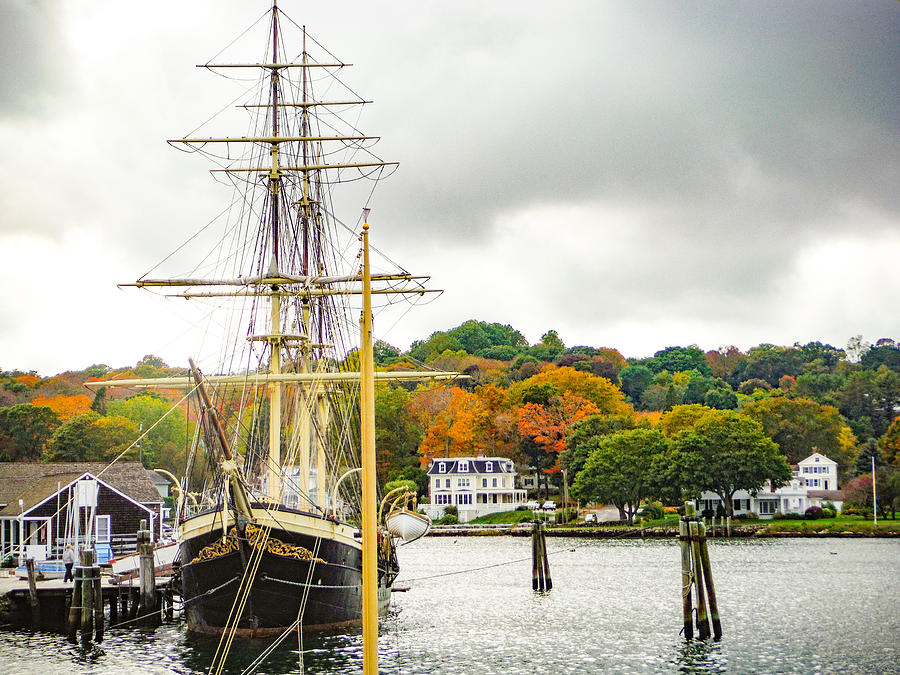 Mystc Seas is a photograph by Bonny Puckett which was uploaded on December 2nd, 2019.

The Joseph Conrad, a veteran training ship sailed under three flags before mooring permanently at Mystic Seaport Museum in 1947. Built in Copenhagen... more

The Joseph Conrad, a veteran training ship sailed under three flags before mooring permanently at Mystic Seaport Museum in 1947. Built in Copenhagen in 1882 and named Georg Stage as a memorial to the young son of Frederick Stage, the 111-foot vessel, one of the smallest full-rigged ships built in modern times, was designed to accommodate eighty boys in training for the Danish merchant service. From her launching until her sale in 1934, more than 4,000 cadets sailed in her for six-month training courses in the Baltic and North seas. Run down by a British freighter in 1905, the Georg Stage sank, taking 22 young men with her. However, she was raised and repaired and soon resumed her career.

Retired after 52 years, the vessel was about to be broken up when Alan Villiers bought her in 1934. Under the British flag, and renamed the Joseph Conrad, Captain Villiers took her on a 58,000-mile voyage around the world that lasted more than two years. Once again boys were her crew–a nucleus of older teenagers from big four-masted barks, officers from the Cape Horn trade, eight American cadets and eight British, with a sprinkling of Australians and New Zealanders.

George Huntington Hartford bought her, added a modern engine, and used her for three years as a private yacht. Under his ownership, the Conrad was matched against the Seven Seas in a square-rigged ship race from the United States to Bermuda and back, each winning one leg. In 1939, the Conrad was transferred by Hartford to the U.S. Maritime Commission and continued in service as an American training ship until 1945. After a two-year lay-up she became, by act of Congress, the property of Mystic Seaport Museum.