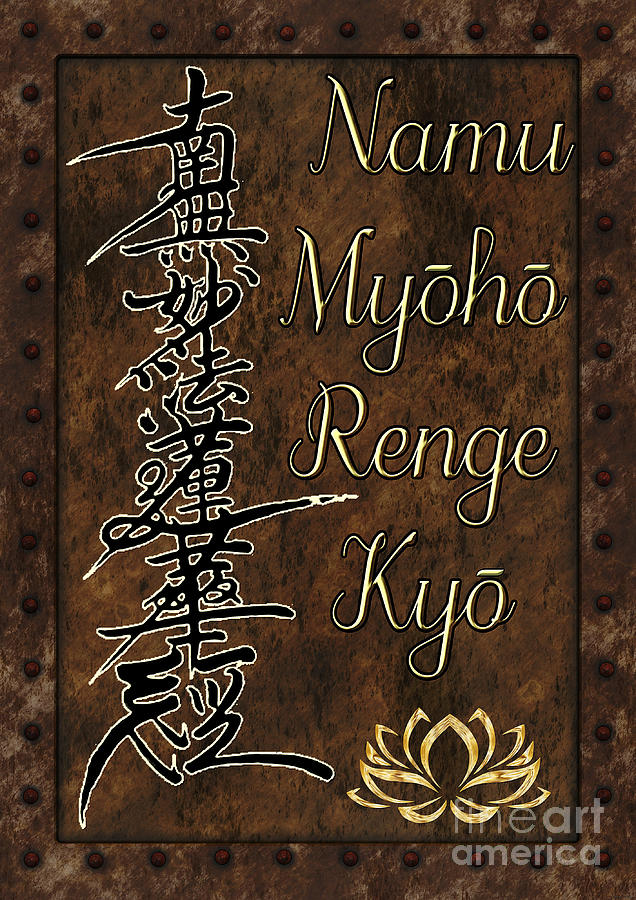 Namu Myoho Renge Kyo is a mixed media by Lita Kelley which was uploaded on January 14th, 2018.

Namu Myōhō Renge Kyō (南無妙法蓮華經) (also known as Nam Myōhō Renge Kyō)[1][2] (English: Devotion to the Mystic Law of the Lotus Sutra or Glory to the Sutra of the Lotus of the Supreme Law)[3][4] is the central mantra chanted within all forms of Nichiren Buddhism as well as Tendai Buddhism.[5]

The words Myōhō Renge Kyō refers to the Japanese title of the Lotus Sūtra. The mantra is referred to as daimoku (題目[6]) or, in honorific form, o-daimoku (お題目) meaning title and was first revealed by the Japanese Buddhist priest Nichiren on the 28th day of the fourth lunar month of 1253 at Seichō-ji (also called Kiyosumi-dera) in present-day city of Kamogawa, Chiba prefecture, Japan.[7][8]

The practice of prolonged chanting is referred to as shōdai (唱題) while the purpose of chanting daimoku is to reduce sufferings by eradicating negative karma along with reducing karmic punishments both from previous and present lifetimes,[9] with the goal to attain perfect and complete awakening.

The Tendai Monks Saicho and Genshin are said to have originated the Daimoku although the Buddhist priest Nichiren is known as the greatest proponent. The mantra is an homage to the Lotus Sutra which is widely credited as the "king of scriptures" and "final word on Buddhism". According to Jacqueline Stone, the Tendai founder Saicho popularized the mantra "Namu Ichijo Myoho Renge Kyo" as a way to honor the Lotus Sutra as the One Vehicle teaching of the Buddha.[11] Accordingly, the Tendai monk Genshin popularized the mantra "Namu Amida, Namu Kanzeon, Namu Myoho Renge Kyo" to honor the 3 jewels of Japanese Buddhism.[12] Nichiren, who himself was a Tendai monk, edited these chants down to "Namu Myoho Renge Kyo" and Nichiren Buddhists are responsible for its wide popularity and usage all over the world today.
A kakejiku Honzon from the Nichiren Shu school with Namu Myōhō Renge Kyō in the center portion.

As Nichiren explained the mantra in his Ongi Kuden[13] (御義口傳; Orally transmitted teachings), a transcription of his lectures about the Lotus Sutra, Namu (南無) is a transliteration into Japanese of the Sanskrit "namas", and Myōhō Renge Kyō is the Sino-Japanese pronunciation of the Chinese title of the Lotus Sutra (hence, Daimoku, which is a Japanese word meaning 'title'), in the translation by Kumārajīva.

Namu is used in Buddhism as a prefix expressing taking refuge in a Buddha or similar object of veneration. In Namu Myōhō Renge Kyō, it represents devotion or conviction in the Mystic Law of Life (Saddharma) as expounded in the Lotus Sutra, not merely as one of many scriptures, but as the ultimate teaching of Buddhism, particularly with regard to Nichiren's interpretation.[citation needed] The use of Nam vs. Namu is, amongst traditional Nichiren schools, a linguistic but not necessarily a dogmatic issue,[14] since u is devoiced in many varieties of Japanese.[citation needed]

The Lotus Sutra is held by Nichiren Buddhists, as well as practitioners of the Tiantai and corresponding Japanese Tendai schools, to be the culmination of Gautama Buddha's 50 years of teaching. However, followers of Nichiren Buddhism consider Myōhō Renge Kyō to be the name of the ultimate law permeating the universe, and the human being is at one, fundamentally with this law (dharma) and can manifest realization, or Buddha Wisdom (attain Buddhahood), through Buddhist Practice.

The seven characters of the phrase are written down the centre of the gohonzon, the mandala venerated by most Nichiren Buddhists. The veneration towards the mandala is understood by those who believe in it as the veneration for a deeper representation, which they believe to be the Buddha Nature inherent to their own lives.[citation needed]

Precise interpretations of Namu Myōhō Renge Kyō, how it is pronounced, and its position in Buddhist practice differ slightly among the numerous schools and sub-sects of Nichiren Buddhism, but "I take refuge in (devote or submit myself to) the Wonderful Law of the Lotus Flower Sutra" might serve as a universal translation.[citation needed]

More recently, with the participation of the Nichiren Buddhist order Nipponzan Myohoji in the peace movement, the mantra has become a more universally recognized prayer for peace. On peace walks it is chanted whilst beating Japanese hand drums, in a practice known as gyakku-Shodai.

This is an original artwork of Lita Xú Líng Kelley and is copyright, ©, all rights reserved,