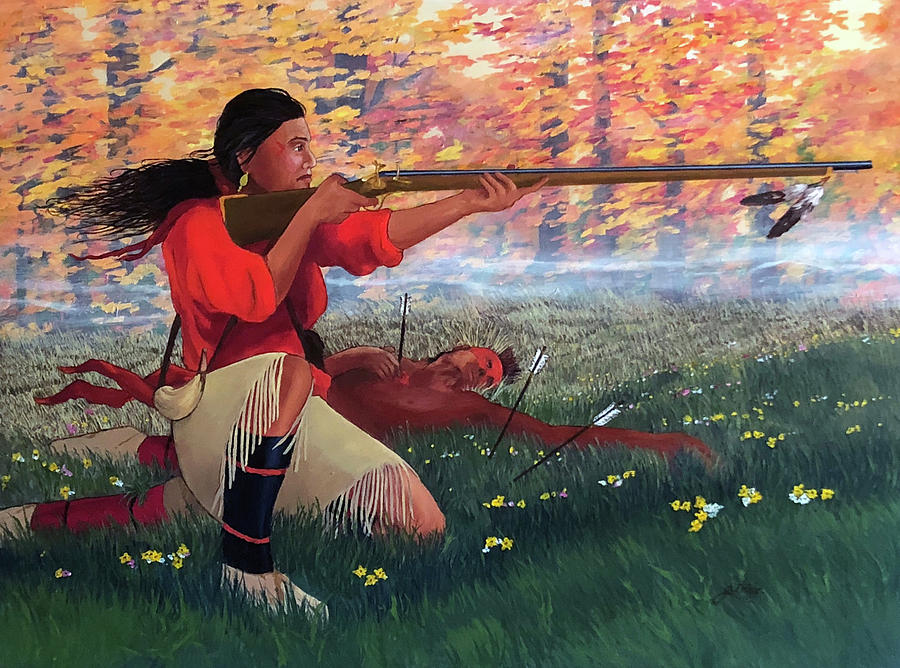 Nanyehi at Taliwa is a painting by John Guthrie which was uploaded on October 5th, 2018.

She was a Full blood of the WolfClan, born in Chota, the City of Refuge and Capitol of the CherokeeNation. Her Great grandfather was Moytoy of... more

She was a Full blood of the WolfClan, born in Chota, the City of Refuge and Capitol of the CherokeeNation. Her Great grandfather was Moytoy of Tellico Supreme Chief 1730 --1760. Moytoy's second daughter, born about 1663 and her husband, The "Raven" of Chotawere Nancy's grandparents. Nancy holds a position of great significance in Cherokee history.

In 1738, Tame Do (the sister of Attakullakulla) and her husband, thought to be a Delaware Indian brave or Chief ( who died early in her life) gave birth to a daughter named Nancy, who in time became the last true Ghi Ga U or Beloved Woman of the Cherokees, and in who, in her views regarding Cherokee and white relationships, was an ally of Little Carpenter (Attakullakulla).

In the early 1750's, she married the noted war leader, Kingfisher of the Deer Clan, and was at his side when in 1755 he was killed by Creek warriors at the battle of Taliwa. She immediately picked up his weapons and rallied the Cherokee warriors to overwhelming victory. Back at Chota, she was chosen to fill the vacant position of a Beloved Woman. It was believed that the Supreme Beings often spoke to the people through the beloved women, and they were given absolute power in the question of what to do with prisoners taken in war, a power exclusive to Ghi Ga U. Nancy did not hesitate to use the power. She was also head of the influential woman's council that consisted of a representative from each clan, and she sat as a voting member of the council of chiefs.

In the late 1750's, about 1759, she married an already wed white trader named Bryant Ward, who before 1760 left her and returned to his white wife and children in South Carolina. In 1772, an English diplomat named Robertson visited Nancy's home at Chota, which he described as being furnished in a barbaric splendor that befitted her high rank. She was then thirty - five years old and he pictured her as "queenly and commanding"(Mooney -Myths of the Cherokeepg. 204 )

In June 1776, Dragging Canoe, Abraham and Raven , Cherokee War Chiefs, with 250 warriors each, at the instigation of the British, planned toattack Western settlements. Ghi Ga u warned the settlers of the impending attacks, then on July 20, 1776, Abraham, marching to attack Watauga in East Tennessee, captured Mrs. William Bean, mother of the first white child born in Tennessee. When the war party returned to Cherokee Country, Mrs. Bean was condemned to be burned at the stake. She was conducted to the top of a mound that stood in the center of Tuskeegee, which was located just above the mouth of the Tellico or Little Tennessee River. Bound at the stake, faggots piled around, torch about to be applied, GhiGau appeared , cut the thongs and took the captive to her home, where Mrs. Bean taught her how to keep house and make butter. As soon as it was safe, Ghi Ga u sent her brother, Tuskeegeeteehee, or Longfellow of Chistatoa and her son Hiskyteehee, or Fivekiller sometimes called Littlefellow, to escort Mrs. Bean to her husband. Numerous settlements had been made on Cherokee land, in direct violation of royal decree from England.

When the Revolutionary War broke out, the Cherokees again sided with the English. In 1776, the Cherokees prepared to attack simultaneously the frontier settlements of Virginia, the Carolinas, andGeorgia. The responsibility assigned to 700 warriors from chota was to strike the settlers who lived in the Watuga area. As much for theCherokees' sake as for that of the settlers, Nancy Ward helped IsaacThomas, William Fawling and another white man to escape from Chota to warn the Watugans in time to build fortifications. This act established Nancy's reputation as a friend of the settlers. When in October 1776Colonel William Christian led nearly 2,000 troops in a devastating raid,out of respect for Nancy Ward he spared Chota, while most of the other Cherokee towns were ravaged.In 1780, at a time when most of the Wataugamen were away from home and engaged in the King's Mountain campaign, at the same time, the frontier rear guards became short on rations and NancyWard agreed to supply beef and had some cattle driven in, the Cherokees again prepared to attack the settlements in the Watauga area. Nancy Ward warned the whites a second time, but when the soldiers returned from King's Mountain and learned of the threat, they were enraged, and set outto teach the Cherokees a lesson they wouldnever forget. Despite NancyWard's pleas for mercy and friendship, Chota was destroyed along withother towns, and for a short time she and her family were placed in protective custody. When they were released, they returned to help rebuild the town, and on July 20, 1781, she was the featured speaker for the Cherokees when the reeling people reluctantly accepted a peace treaty with the Wataugans.

When the Treaty of Hopewell was made in South Carolina in 1785, she offered another dramatic plea for continued peace between the Indians and the whites. Once the unhappy war years were ended she lived in Chota, where although it was no longer the capitol of the nation, it was still a city of refuge, and from all over the nation she took into her home orphaned and homeless waifs, including mixed breeds.

Nancy Ward died in 1822, a truly remarkable woman who learned a permanent place of honor in Cherokee and white history"( The CherokeePeople pp. 193 - 194) Ghi Ga u conducted an inn at the Womankiller ford of the Ocowee Riverfor many years and became quite wealthy; her property consisted of livestock, slaves and money. Travelers called her "Granny Ward" because of her age and that she was the widow of Bryant WardNancy grew too old to meet with council and other chiefs, she sent her servant to take her walking stick, her badge of authority, to her appointed seat in the council building to assure that her spirit was there, most notably the council at Amoah, May 6, 1817, the renunciation of her delegated rights and in favor of the first Constitutional Enactment of the Cherokees. Nancy Ward died at her home at the Womankiller ford, in the spring of 1822. Her grave site, a designated state park, is located on a knoll next to U. S. Highway 411, just South of Benton, Tennessee. Buried beside her son, Fivekiller, a veteran of the War of 1812, and her brother Longfellow. Her grave site overlooks the site where Nancy ran her inn, where the old Unicoy Pikecrossed the Ocoee River.( the Pike was the main road from Knoxville intoNorthern Georgia and was a popular resting place for travelers)