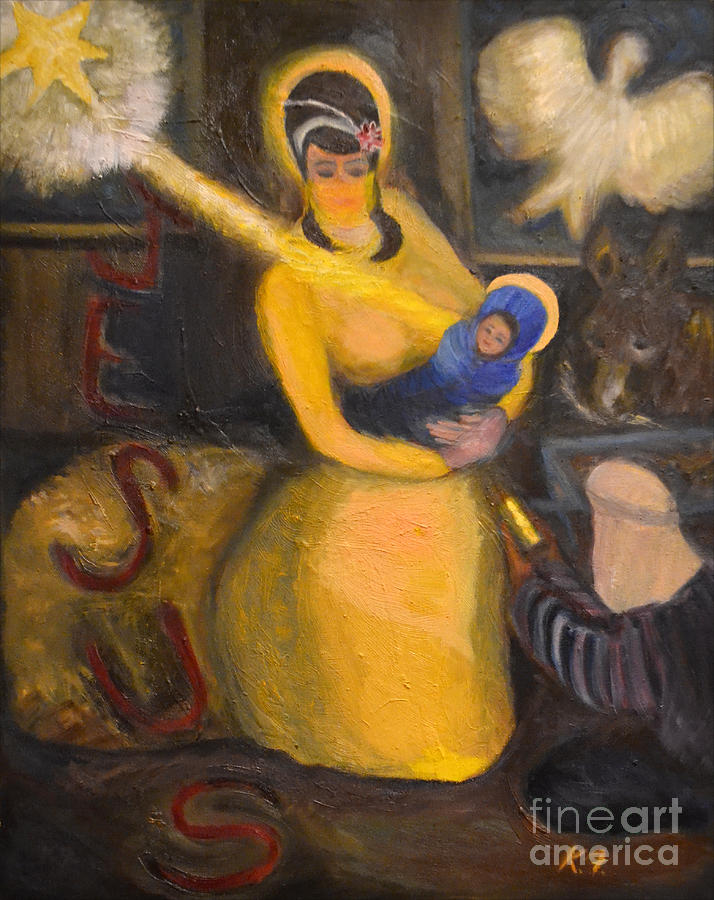 Nativity is a painting by Karen Francis which was uploaded on December 9th, 2014.

The original painting of this nativity scene is an oil on canvas, size 16 x 20 inches. It was painted over the time frame of 2011 - 2014, but has now been significantly modified, 2020. So this image as seen here is now only available as a print. It shows Mary in a long yellow garment holding the baby Jesus wrapped in swaddling clothes in a stable bathed with the light of a star shining down through a window, a kneeling wise man offering a gift, and a donkey munching on hay. An angel appears to be flying away in the distance and letters spelling out Jesus cascade down the front left of the painting. This painting was inspired by the story of the birth of Jesus found in the New Testament gospels (Matthew, Luke) in The Holy Bible, known to some as a manual containing:
B = Basic
I = Instructions
B = Before
L = Leaving
E = Earth
A glimpse of the start of this painting "Nativity" by Karen Francis, may be seen in the PG rated movie Christmas Ride in the world Christmas Traditions scene. That film has received The Dove Foundation rating of Faith and Family Approved for ages 12+ .
Mary, the Blessed Virgin, is memorialized 14 days of the year on the Catholic calendar, and she is identified as the National Saint of America. She is included in numerous paintings. In the book, The World's Painters, by D. L. Hoyt, published in 1898, Hoyt explains the differences in the depiction of the Nimbus surrounding the head of holy persons, saints and Divinity, based on the custom of the century in which the picture was painted. From personal experience, I believe occasionally artists paint the halo or Nimbus today based on vague memories of what they have seen in other prints or paintings without intentional reference to a specific century or custom. Maybe some of the exceptions to his description did also.
Hoyt writes: " . . . when square it [the Nimbus] denotes that the holy person was living at the time the picture was painted. From the fifth to the twelfth century it was pictured as a solid golden disc, or plate, OVER the head; from the twelfth to the fifteenth it was a broad golden band AROUND or BEHIND the head; from the fifteenth it has been a bright fillet over the head."
"The solemnity of the birth of Jesus Christ was celebrated on December 25 as early as the time of Pope Liberius, in 354. . . Christmas is the manifestation to the world of God become human; it is recognized by both the Western and Eastern Churches. Scenes of the Nativity have been of central importance to the history of Western art since the 5th century." --from the book, Saints A Year in Faith and Art by Rosa Giorgi.
The story of the Nativity is recorded in the Bible: Luke 2:1-20 and Matthew 1:18 - 12. Jesus was born in Bethlehem in Israel, of the line of an earlier King named David, which the prophets foretold in the Old Testament of The Bible. The books of the Old Testament and the New Testament are studied by Christians. Some chapters of the Old Testament in the Book of Psalms, are also in the holy book of the Muslims, I was told.