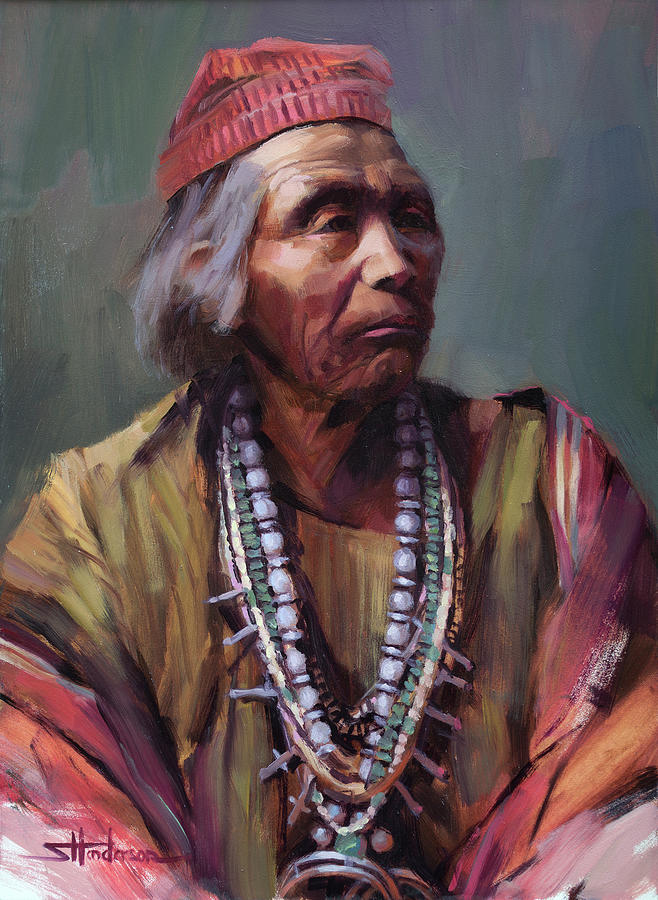 Nesjaja Hatali Medicine Man of the Navajo People is a painting by Steve Henderson which was uploaded on March 7th, 2018.

Nesjaja Hatali was a medicine man of the Navajo people in the late 19th century. The painting interpretation by Steve Henderson of Nesjaja Hatali is... more

Nesjaja Hatali was a medicine man of the Navajo people in the late 19th century. The painting interpretation by Steve Henderson of Nesjaja Hatali is based upon the photograph taken by Edward S. Curtis, the archives of which are in The North American Indian Collection housed at Northwestern University Library.

Curtis’s task was a monumental one – documenting what remained of traditional First People culture a full generation after the official end of 19th century brutal conflict between the U.S. Government and the Native American people. The advent of photography allowed Curtis to visually capture a time and place, a people and an historical lifestyle, which is no more.

Steve’s painting interpretation of Curtis’s sepia-toned photograph adds color to Nesjaja’s skin, clothing, and jewelry, with an emphasis upon the rich tones of the turquoise and silver necklaces, set against the deep brown of Nesjaja Hatali’s skin.

This is a man who has lived much outdoors, with the weathering of the skin evident. There is a strong set to the jaw, a strength to the structure of the face, that causes the viewer to pause in silence and respect. Looking away from the camera, Nesjaja Hatali appears to be in deep thought, in a state of quiet reflection that implies a sense of wisdom.

Not all Native Americans were wise, in the same way that not all non-Native Americans are wise, or savvy, or foolish, or whatever stereotypes we create to fit our interpretation of the world. But the face of Nesjaja Hatali would arrest the sight of anyone today, because it is a face of repose and thought, one in which the person’s thoughts are deep within that person himself.

There are people like this today – few, but existent – and the artwork Nesjaja Hatali reminds us of the beauty and nobility of the human form and face. Beauty is not in Hollywood glitiz – it is in the faces of those who have lived through much, and learned even more.

Featured Artist of the Week in the Fine Art America group, Our World Gallery -- July 2018

Congratulations on your 3d place win in the Realistic Portraits contest! VLF

Love this, Steve ~ my heart always goes out to these beautiful people:)))

I am gratified, Roselynne, that this artwork connected with your heart and soul.

This & the other Native American paintings are masterpieces and your description of this man, his life & what he stood for is equally profound. Thank you for sharing your thoughts & your art, Rita

Thank you, Rita, for your thought-filled words and for taking the time to read the description (By the way, these wonderful descriptive essays on art and life that accompany each artwork are written by my wife and business partner, Carolyn.)

Congratulation for 2nd. place in the contest.

Congratulations on your 2nd Place Win in the SPORTS SCIENCE POLITICS ARTS MOST RECOGNIZED PEOPLE Contest for this outstanding portrait of this honorable Native American leader, clearly one of integrity and wisdom. Excellent work! F/L

You create such life on canvas. You can see the wisdom and hardships bestowed on this medicine mans life in your portrait. You certainly have captured a time and place for this man to be forever enjoyed by all.

The visual emotion, age and wisdom is incredible in this image. I really can see this medicine man's pain and life struggles in his eyes and facial expression. Well done Steve.

Thank you, Paul, for your sensitive observations.

Steve, I love your work and I am particularly drawn to your 3 Native Indian portraits. They are special! I have hundreds of photos from Pow Wow events in US and Canada. From these I have composed several oil paintings the first of which I have just put on Fine Art America. Your work inspires me to continue to paint a wonderful culture and history.

Thank you , Bruna, for sharing some of your journey and for connecting with the Indian pieces.

congratulations on your feature in Over 2000 Views

Love your interpretation of the original photo and the narrative.

Thank you very much, David. I very much enjoyed the entire process in painting Nesjaja.

Stunning portrait, Steve. Congratulations on your "Feature" on the home page in 1000 Views Group. F/L

Congratulations on your Special feature in 1000 Views FL

Nominating this wonderful piece of art for special feature in the 1000 Views Group!

One of your peers nominated this image in the 1000 views Groups nominated images by your fellow artist in the Special Features #12 promotion discussion. Please visit and pass on the love to another artist.

Nominating this beautiful art for special feature in the 1000 Views Group!