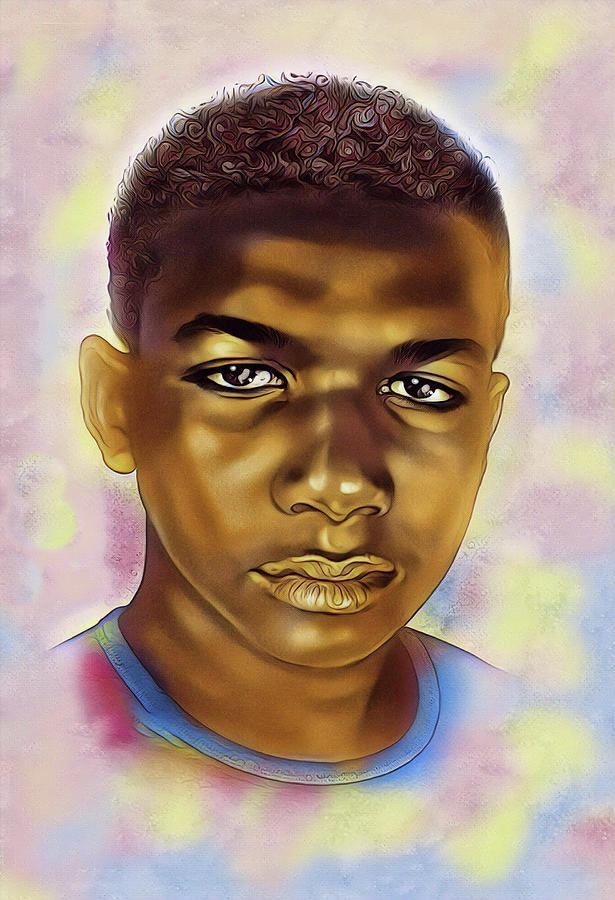 Never Forget Trayvon is a piece of digital artwork by Karen Showell which was uploaded on May 12th, 2018.

Trayvon Martin was born in Florida on February 5, 1995. An athletically-inclined teen with an eye towards aviation, Martin had no criminal record... more

Trayvon Martin was born in Florida on February 5, 1995. An athletically-inclined teen with an eye towards aviation, Martin had no criminal record when he was shot and killed by neighborhood watch member George Zimmerman on February 26, 2012, in Sanford, Florida. Zimmerman's initial release and later arrest sparked a national debate over racial profiling and the role of armed neighborhood watch members in law enforcement. On July 13, 2013, a jury acquitted Zimmerman of murder. The Trayvon Martin Foundation was established in 2012, with thousands having taken to the streets across America to protest the circumstances surrounding the teen's death.

Background and Education
Trayvon Benjamin Martin was born in Florida on February 5, 1995. His parents, Sybrina Fulton names are Tracy Martin, years Trayvon Martin attended public schools in Florida, including the Dr. Michael M. Krop High School in Miami Gardens. With parents that wanted to expose him to the world, Martin had experiences that included skiing, horseback riding and a trip to New York City to take in the sights.


At Carol City High, where Martin went to school before Krop, the youngster took an English Honors class, though his favorite subject was said to be math. Tall and athletically inclined with tattoos of family member names on his frame, the often quiet Martin was highly interested in studying aviation and potentially becoming a pilot.

Tragic Death
In late February 2012, Martin spent his third high school visiting his father, whom he was close to, and his father's fiancée, Brandy Green, at Green's home in a gated community, The Retreat at Twin Lakes in Sanford, Florida.

In response to a rash of robberies and burglaries, the residents of the community established a neighborhood watch in September 2011. George Zimmerman, one of the residents, was selected as the program coordinator. Zimmerman regularly patrolled the streets and was licensed to carry a firearm. From August 2011 to February 2012, Zimmerman had called police several times to state he had seen individuals whom he had deemed as suspicious. All of the reported figures were black males.

On the evening of February 26, Zimmerman saw Martin, who had left the house to purchase Skittles and iced tea. From his SUV, Zimmerman called the police department at 7:11 PM to report a "suspicious guy," Martin, walking between homes and starting to run. The dispatcher told Zimmerman not to get out of his car and follow Martin, with Zimmerman disregarding instructions and pursuing the teen.

Later released video footage of Martin shopping for treats at 7-11 showed no criminal or aggressive behavior. In later interviews, it was revealed that Martin was on the phone with his girlfriend when he was spotted by Zimmerman. She stated that Martin noticed that he was being followed by someone and thus began to run, with the two soon losing contact with each other via Martin's earpiece. Martin and Zimmerman, whom it is believed never identified himself as part of a community watch, encountered each other in circumstances that have remained mysterious and conflicted, with someone calling out for help multiple times in a short time span. The confrontation ended with Zimmerman shooting the unarmed teenager in the chest. Martin died less than a hundred yards from the door of the townhouse in which he was staying.

Arrest and Trial of George Zimmerman
An officer arrived on the scene at 7:17 p.m. He found Martin dead and Zimmerman on the ground, bleeding from wounds to the head and face. The officer then took Zimmerman into custody, who claimed he shot Martin in self-defense. Zimmerman was shortly released with no charges filed.

Martin's father Tracy learned of his son's death after filing a missing person report with the Miami-Dade Police Department. Having gotten legal representation, Martin's parents also created a Change.org document that received more than a million signatures calling for Zimmerman to be placed under arrest. The case became a social media phenomenon and national story, with Zimmerman's critics alleging that racial antipathies may have motivated his actions. President Barack Obama, who stated to the media that "If I had a son, he'd look like Trayvon," also called for the case to be investigated.

Zimmerman was charged with second-degree murder on April 11, 2012, with additional information coming to the media's attention that made the case even more highly charged. The trial began on June 24, 2013, after the selection of an all-female jury. The following month, on July 13, 2013, the six-member jury acquitted Zimmerman of murder, triggering mostly peaceful protests in several American cities.

The Trayvon Martin Foundation was established in March 2012, with the goal of increasing awareness about the effect of violence on families while scrutinizing racial and gender crime profiling. His case continues to be remembered and create dialogue.

Awe thank you so very much. I am honored as well as humbled

Thank you very much and God bless you Karen

Thank you very much, Anthony and God bless you Karen

Thank you so much, John, for all of the features. I really do appreciate your help so much and God bless you and your family.

I will never forget him Thank you for memorializing him in such a sensitive way.

Awe, you are so sweet Saundra. Thank you and God bless you. Have a wonderful day.

Thank you very much and thank you for featuring my art. You have been such a blessing in my life. I pray that all of your dreams come true.