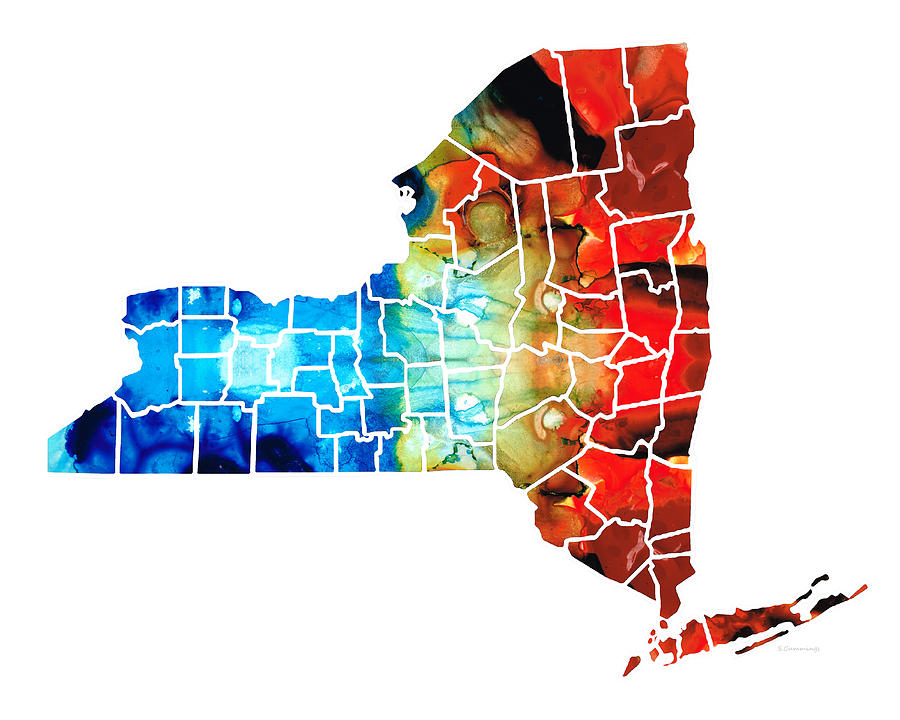 Colorful New York Map. New York is a state in the Northeastern and Mid-Atlantic regions of the United States. New York is the 27th-most extensive,... more

Colorful New York Map. New York is a state in the Northeastern and Mid-Atlantic regions of the United States. New York is the 27th-most extensive, the third-most populous, and the seventh-most densely populated of the 50 United States. New York is bordered by New Jersey and Pennsylvania to the south and by Connecticut, Massachusetts, and Vermont to the east. The state has a maritime border with Rhode Island east of Long Island, as well as an international border with the Canadian provinces of Ontario to the west and north, and Quebec to the north. The state of New York is often referred to as New York State, so as to distinguish it from New York City.
New York City, with a Census-estimated population of over 8.3 million in 2012,[8][9] is the most populous city in the United States.[10][11] Alone, it makes up over 40 percent of the population of New York State. It is known for its status as a center for finance and culture and for its status as the largest gateway for immigration to the United States. New York City attracts considerably more foreign visitors than any other US city.[12] Both the state and city were named for the 17th century Duke of York, future King James II of England.
New York was inhabited by various tribes of Algonquian and Iroquoian speaking Native Americans at the time Dutch settlers moved into the region in the early 17th century. In 1609, the region was first claimed by Henry Hudson for the Dutch. Fort Nassau was built near the site of the present-day capital of Albany in 1614. The Dutch soon also settled New Amsterdam and parts of the Hudson River Valley, establishing the colony of New Netherland. The British took over the colony by annexation in 1664.
The borders of the British colony, the Province of New York, were roughly similar to those of the present-day state. About one third of all the battles of the Revolutionary War took place in New York. The state constitution was enacted in 1777. New York became the 11th state to ratify the United States Constitution, on July 26, 1788.

another great creation from the map series.. love it!

A unique and creative new look to a traditional subject! Sharing!