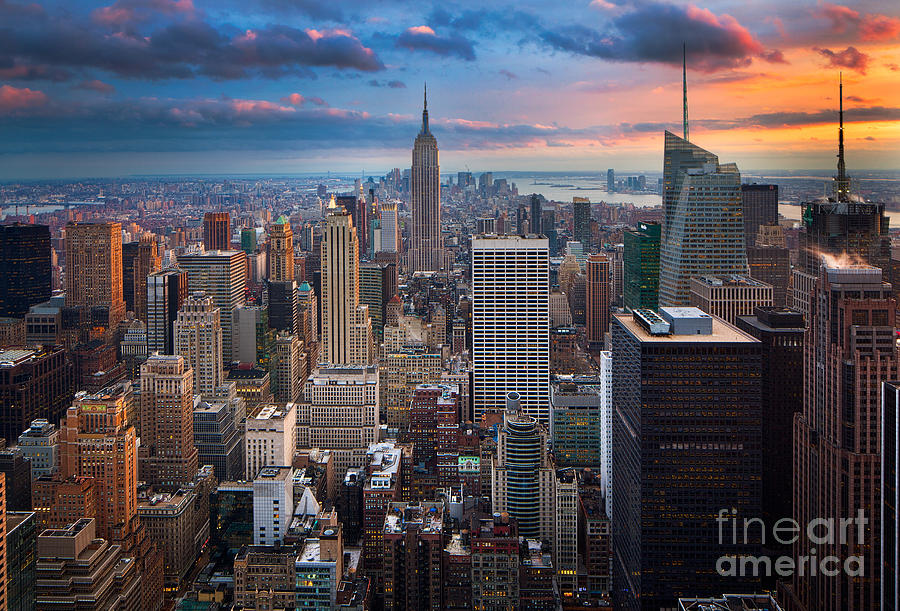 New York New York is a photograph by Inge Johnsson which was uploaded on October 22nd, 2011.

Manhattan, New York City, skyline at sunset
.....
Captured with a Canon 5D Mk II and a Canon TS-E 24/3.5L Mk II lens
.....
New York is a state in the Northeastern region of the United States. New York is the 27th-most extensive, the 3rd-most populous, and the 7th-most densely populated of the 50 United States. New York is bordered by New Jersey and Pennsylvania to the south, and by Connecticut, Massachusetts and Vermont to the east. The state has a maritime border with Rhode Island east of Long Island, as well as an international border with the Canadian provinces of Ontario to the west and north, and Quebec to the north. The state of New York is often referred to as New York State to distinguish it from New York City.
New York City, with a population of over 8.1 million, is the most populous city in the United States. Alone, it makes up over 40 percent of the population of New York state. It is known for its status as a center for finance and culture and for its status as the largest gateway for immigration to the United States. According to the U.S. Department of Commerce, New York City is also a destination of choice for many foreign visitors. Both the state and city were named for the 17th century Duke of York, James Stuart, future James II and VII of England and Scotland.
Manhattan is the most densely populated and smallest in area of the five boroughs of New York City. Located primarily on the island of Manhattan at the mouth of the Hudson River, the borough is conterminous with New York County, an original county of the state of New York. The borough and county consist of Manhattan Island and several small adjacent islands: Roosevelt Island, Randall's Island, Wards Island, Governors Island, Liberty Island, part of Ellis Island, Mill Rock, and U Thant Island; as well as Marble Hill, a small area on the mainland bordering the Bronx. The original city of New York began at the southern end of Manhattan, expanded northward, and then between 1874 and 1898, annexed land from surrounding counties.
Manhattan is a major commercial, economic, and cultural center of the United States. Anchored by Wall Street in Lower Manhattan, New York City functions as the financial capital of the world, with an estimated GDP of over $1.2 trillion, and is home of both the New York Stock Exchange and NASDAQ. Many multinational media conglomerates are based in the borough.
Manhattan has many famous landmarks, tourist attractions, museums, and universities. It is also the location of the United Nations Headquarters. It is the cultural and economic center of New York City and the New York metropolitan area, hosting the seat of city government and a large portion of the area's employment, business, and entertainment activities. As a result, residents of New York City's other boroughs such as Brooklyn and Queens often refer to a trip to Manhattan as "going to the city", despite the comparable populations between those boroughs, and the fact that these boroughs are also part of the city proper.

Love the clarity and rich color and contrast in this beauty Inge ... congratulations on your sale!!

Beautiful capture! Congratulations on your sale!

Great light! Congrats on your sale!

Congratulations on your sale Inge! Fantastic capture from above New York! Awesome! L/F :-)

Nice image. Congratulations on your sale!

Fantastic !! Congrats on your sale !

Congratulation on sale announcement and fantastic.

One of your peers nominated this image in the 1000 views Groups nominated images by your fellow artist in the Special Features promotion discussion. Please visit and pass on the love to another artist. https://fineartamerica.com/groups/1000-views-on-1-image.html?showmessage=true&messageid=2783458