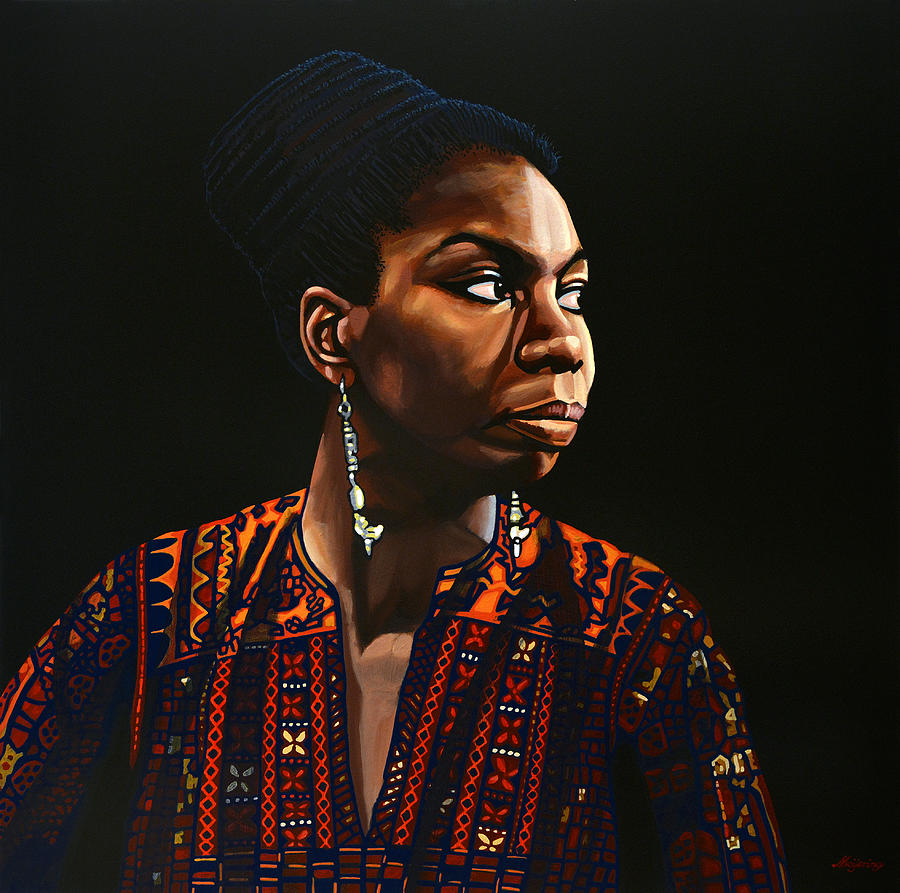 Nina Simone Painting is a painting by Paul Meijering which was uploaded on July 15th, 2015.

Realistic acrylic painting of the American singer, songwriter and pianist, the High Priestess of Soul; Nina Simone, painted by the Dutch fine artist Paul Meijering - the Original painting is 90 x 90 cm and for sale

The sixth child of a preacher's family in North Carolina, Simone aspired to be a concert pianist. Her musical path changed direction after she was denied a scholarship to the prestigious Curtis Institute of Music in Philadelphia, despite a well-received audition. "Simone said she later found out from an insider at Curtis that she was denied entry because she was black." To fund her continuing musical education and become a classical pianist, she began playing in a small club in Philadelphia where she was also required to sing. She was approached by Bethlehem Records, and her rendition of "I Loves You, Porgy" was a hit in the United States in 1958. Over the length of her career Simone recorded more than 40 albums, mostly between 1958, when she made her debut with Little Girl Blue, and 1974.

Her musical style arose from a fusion of gospel and pop songs with classical music, in particular with influences from her first inspiration, Johann Sebastian Bach, and accompanied with her expressive jazz-like singing in her characteristic contralto voice. She injected her classical background into her music as much as possible to give it more depth and quality, as she felt that pop music was inferior to classical. Her intuitive grasp on the audience￿performer relationship was gained from a unique background of playing piano accompaniment for church revivals and sermons regularly from the early age of six years old.

Congratulations your beautiful work is being featured in The World We See :-)

Congratulations on being featured in the FAA Group ‘Promote Your Work Here and Get Noticed.' To ensure your feature remains available over time, post your featured image(s) in the Group's 'Thanks for the Feature / Image Archive.’ If you allow pinning, your image will be pinned to the Group’s features board (www.pinterest.ca/tendrelimages/promote-your-work-here-get-noticed)

Nice portrait. Congratulations on your sale!

Thank you so much, Sunil!! For your compliment as well!!;-))

Thank you very much, Marcia, for your compliment!!;-))

Congratulations your beautiful artwork is being featured in The World We See Group:-)

Thank you so very much, Robyn, for your compliment, support and the feature in your amazing group!!;-))

Thank you so very much, Greta, for your compliment, support and the feature in your elite group!!;-))

Congratulations for the feature of your artwork on the homepage of Greeting Cards For All Occasions! 7-15-15