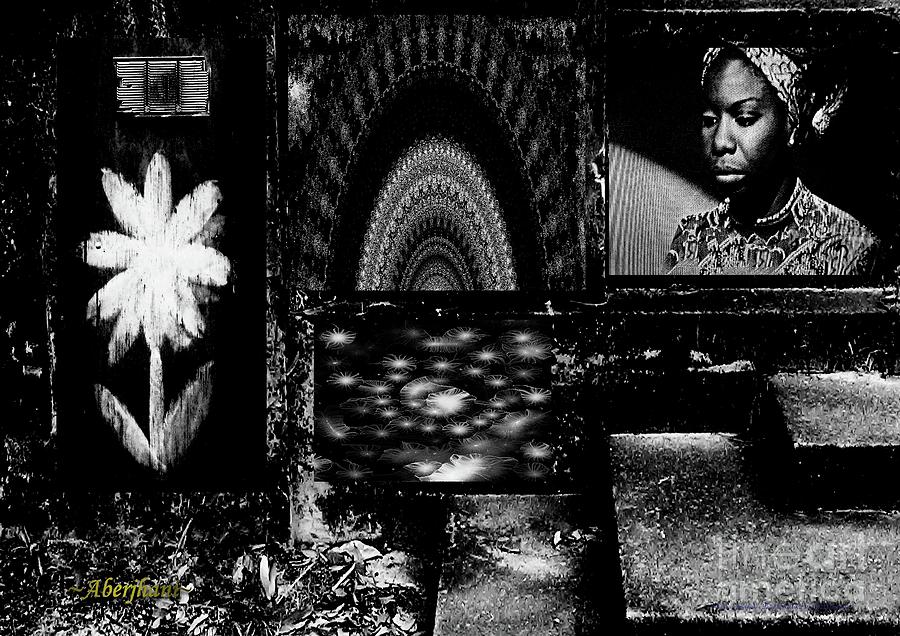 Ode to the Genius and Good Intentions of Nina Simone Number 1 is a mixed media by Aberjhani which was uploaded on May 18th, 2020.

Feedback from a friendly critic informed me that although I sometimes categorize certain artwork as mixed media, I rarely say what the mixture... more

Feedback from a friendly critic informed me that although I sometimes categorize certain artwork as mixed media, I rarely say what the mixture includes. I probably do that because by the time the time the work is completed, the individual media pieces are nothing like their original form. But for my amiable observer I’m going to share that the original mixed media seen here for my tribute to the great singer Nina Simone includes found fragments of concrete steps, grass-covered earth, digital constructions, original Silk-Featherbrush fragments, paint on wood, pen and ink of Simone inspired by vintage concert films, & other materials. Don’t know if that will help anything so far as assessing the finished work goes but there it is.

As the title implies, this is the first of 2 versions. The most obvious difference between them is the black & white palette seen here in contrast to a selective-color variation in the second. Also, both are presented in a collage style but the visual elements are also presented differently (with some omitted, some added) to project (hopefully) the kinds of dramatic effects the subject herself did in recordings and on stage.

A LITTLE BACKGROUND: Nina Simone (1933- 2003, born Eunice Kathleen Waymon) was one of the most influential musical artists of her generation and remains one of the most admired and inspiring today. She was a superb pianist and virtuoso singer of jazz, blues, pop, gospel, and traditional African-American folk songs. When performers like BeYonce and John Legend use their star power to bring attention to important issues, they often cite Simone’s example.

EXCERPT FROM ARTICLE I WROTE ON SIMONE: “Commitment and Consequences. The singer once stated that as far as she was concerned, the job of a creative artist was to address the pressing issues of her times. Towards that end, she wrote and recorded a number of songs which addressed individual moral responsibility as well as the civil rights and women’s rights movements of the 1960s… While many championed Simone for her courageous outspokenness at a time when passive endurance was considered the key to civil rights success for African Americans, others vilified her for it...”

Thank you Aberjhani for explaining how you do your mixed media process . I knew nothing about Nina Simone and appreciate the new knowledge of this amazing artist . My favorite singer is Billy Holiday . She rips your heart out with her voice and words v FL

Compliments, Aberjhani, !! This is absolutely wonderful, your tribute to the beautiful Nina Simone, a wonderful lady, a favourite of mine: her music, her mind! Kudos, f.v.........VIVA

Yes we do hold Ms. Simone in very high esteem. You are most welcome, Aberjhani, and I'm glad you connected to Eric's beautiful visual salute of Ms. Simone too.

Thank you very much Laurie for your kind comments and the link to Eric Laprade's visual salute to Nina Simone's controversial social protest anthem "Mississippi Goddamn." Quite a few of my creatively-inclined friends tend to hold Ms. Simone in very high esteem.

Wonderful tribute for an extraordinary creative artist, Aberjhani! Love what you did to honor her and love your excellent excerpt. I used to paint with a very gifted artist who painted a beautiful portrait of Nina Simone. While he painted her, he played her music throughout the creative process. He is here on FAA https://fineartamerica.com/featured/mississippi-goddam-nina-simone-eric-laprade.html It was such an honor for me to be present while my friend painted her. Your tribute struck me powerfully and brought me back to that special time. Thank you for sharing your gifts with us!

My deepest appreciation to the YOUR VERY BEST PHOTOGRAPHY group for featuring this work.

Wonderful work in black and white! This is excellent Aberjhani, and so unique!

Thank you so much Carol. I've been fortunate to study works by excellent photographers like yourself here on FAA & learn some useful creative strategies.

Superb composition in this extraordinary tribute, Aberjhani!! Such an elegant selection of images for this brilliant artist. L/F

Thank you very much Angeles. I worked & reworked the Simone tribute pieces for quite some time before completing them.