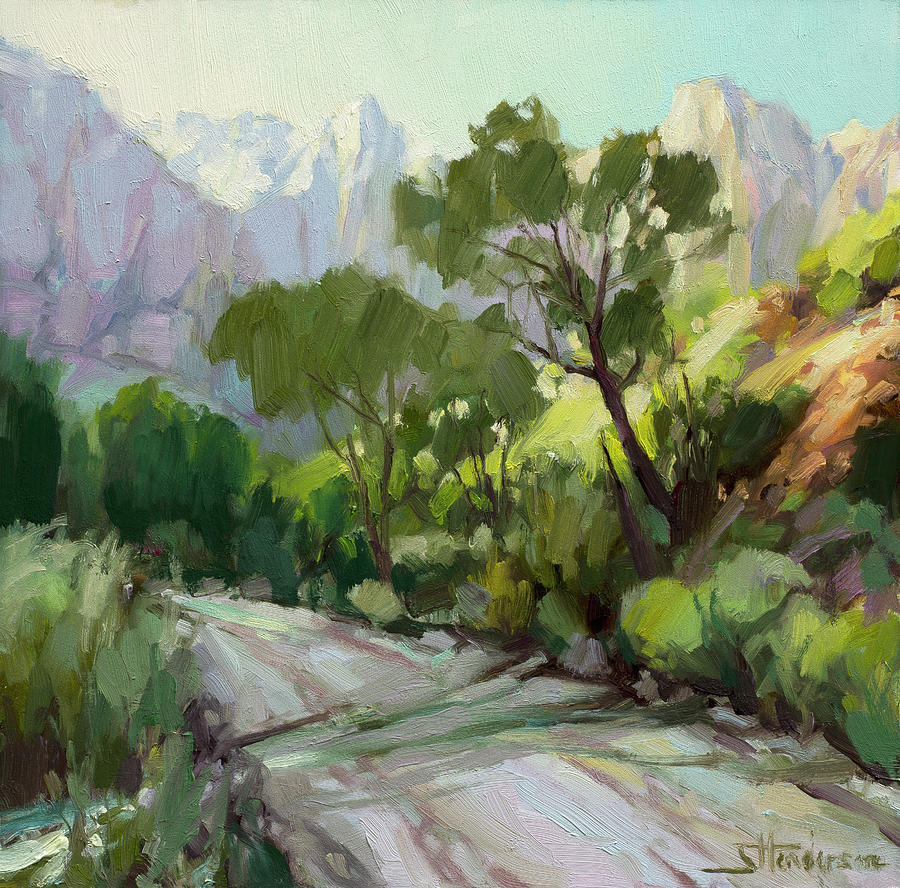 On the Temple Road is a painting by Steve Henderson which was uploaded on February 14th, 2020.

On the Temple Road

There are many types of roads – both physical and beyond.... more

On the Temple Road

There are many types of roads – both physical and beyond.

Some, like freeways, are designed to get us someplace quickly. One does not stop along these freeways, pulling to the side, getting out of the car, and setting up a picnic lunch.

Roads within towns also get us someplace, not quite so quickly, and again, we rarely stop to lay out a cloth and sit meditatively on the sidewalk.

There are country roads, service roads, cul de sac roads – at one time or another we find ourselves on them, again, with idea of reaching a particular destination.

And then there are the forgotten roads – often gravel or dirt, which at one time had a purpose and, once they were no longer needed, fell into disuse.

Such is the road shown in the artwork, On the Temple Road. Located in Zion National Park, Utah, this road is an offshoot of a service road leading out of the main park. Nominally kept up, it is pitted and grooved. Trees and bushes along the side creep their way inward, and water from many streams finds its way, as water does, across the roadway as it follows the dictates of gravity.

So one would say, as roads go, that this one is relatively useless. But it is not.

Following this road, one finds themself away from the crowds, the crowds that stay within the “official” park and limit themselves to trails that many, many other people are taking. And while those trails take visitors to beautiful places, roads such as that shown in On the Temple Road also take people to beautiful places, with the added bonus that those places are not busy.

Within a short time of walking, you are surrounded by rocky, craggy peaks – one of which is named West Temple, hence, the name of the painting. It is like being in an outdoor cathedral, one without roof – grand and glorious and majestic and breathtaking.

This road, which looks like it goes nowhere, goes someplace indeed.

(An artwork complementing On the Temple Road is Mountain of Spires, also on this site by Steve Henderson.)

Kudos to both of you!

Thank you, Ron, for taking time to view AND read. FYI: These wonderful accompanying essays on art and life are written by my wife (who also works as our business manager). She writes, I paint — a great partnership.

A most beautiful scenic work of art, Steve.... Love how this gently invites the viewer to explore, experience and enjoy. Nominating this beauty for a Special Nomination in the 1,000 Views on 1 Image group. F/L

Congratulations!! This stunning image has been selected to be featured for the week in the “Art for Ever with You” Group Home Page. You are welcome to add a preview of this featured image to the group’s discussion post titled “2020 May: Stunning Group Featured Images and Thank-you’s” for a permanent display within the group, to share this achievement with others. Also feel free to post your feature on our group Facebook page: https://www.facebook.com/groups/296998814248643/ Thank you for your participation in the group! ~Jan (May 3, 2020)

Congratulations - Your beautiful artwork has been featured in the "Travel Art" gallery at Fine Art America! For further promotion, you can post it to the specific Travel Destinations galleries, our Facebook group and our Pinterest board - all the links are provided on our group's homepage: https://fineartamerica.com/groups/1-travel-art.html ** Want to post on our group's blog: travelartpix.com? Check the group's homepage for details!

Fantastic, I especially like the cut in the road made by the creek. Well done. lf

Congratulations on your feature in the group OBSESSED Painters Paintings

Congrats on your feature in the group called impressionists of the 21st century on Fine Art America , beauty! :) F/L