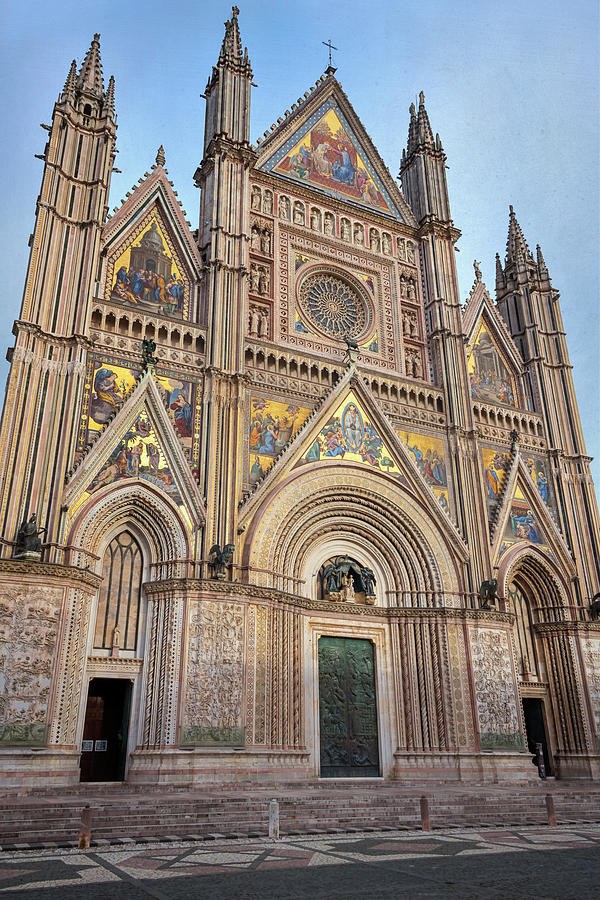 Orvieto Italy Cathedral is a photograph by Joan Carroll which was uploaded on February 3rd, 2018.

The detail, craftsmanship, and symbolism in the construction of cathedrals never ceases to amaze, and this is true of the 14th-century Roman Catholic... more

The detail, craftsmanship, and symbolism in the construction of cathedrals never ceases to amaze, and this is true of the 14th-century Roman Catholic cathedral dedicated to the Assumption of the Virgin Mary in the town of Orvieto in Umbria, central Italy. The construction of the cathedral lasted almost three centuries, time enough for the design to evolve from Romanesque to Gothic. The façade has a large rose window and is awash in glittering golden mosaics. The bas reliefs on the piers depict biblical stories from the Old and New Testaments and are considered the most famous of all 14th century sculpture. The bronze doors are from the 20th century. The church was constructed to commemorate a miracle said to have occurred nearby in 1263 and to provide a suitable home for a relic of that miracle. A priest had doubts about the belief held by the Catholic church that the bread and wine consecrated during the Mass actually becomes the body and blood of Jesus Christ. As he celebrated a mass, the host began bleeding so much that it stained the altar cloth. This altar cloth is now housed in a side chapel of the cathedral.

One of your peers nominated this image in the 1000 views Groups nominated images by your fellow artist in the Special Features #10 promotion discussion. Please visit and pass on the love to another artist.

Beautifully done! Nominated for special feature in the 1000 Views Group

Gorgeous, one of my favorites!

Thank you Frozen in Time Fine Art Photography for the feature in the New Faa Uploads Limit One Per Day group, 2/18/18

thank you John for the feature in the Images That Excite You group, 2/3/18

thank you Doug for the feature in the Churches group, 2/3/18

I love this church!!