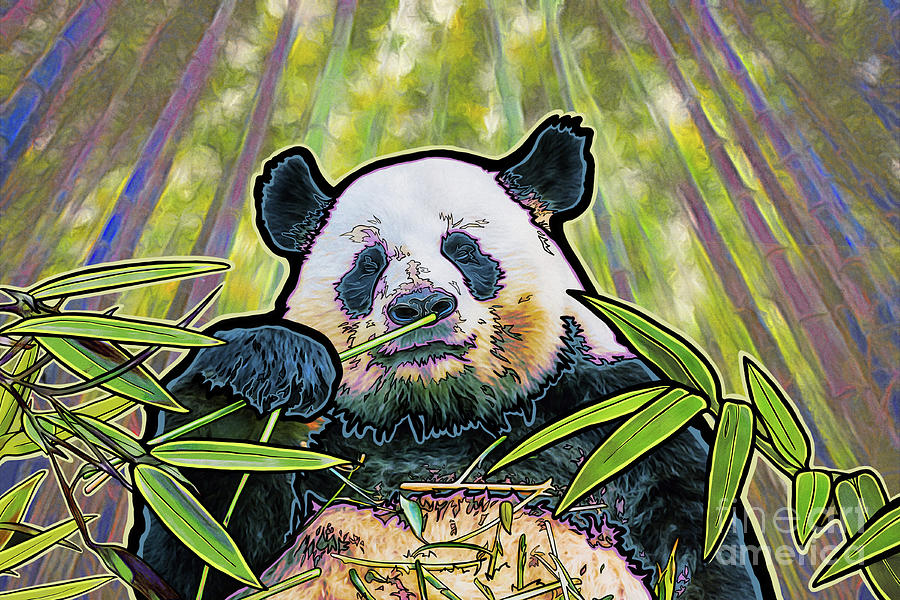 Panda Bamboo'd is a mixed media by Karin Hoffman which was uploaded on June 11th, 2019.

SUBJECT: The giant panda is a conservation-reliant vulnerable species. A 2007 report showed 239 pandas living in captivity inside China and another... more

SUBJECT: The giant panda is a conservation-reliant vulnerable species. A 2007 report showed 239 pandas living in captivity inside China and another 27 outside the country. As of December 2014, 49 giant pandas lived in captivity outside China, living in 18 zoos in 13 different countries.Wild population estimates vary; one estimate shows that there are about 1,590 individuals living in the wild,while a 2006 study via DNA analysis estimated that this figure could be as high as 2,000 to 3,000.In 2016, the IUCN reclassified the species from "endangered" to "vulnerable".
While the dragon has often served as China's national symbol, internationally the giant panda has often filled this role. As such, it is becoming widely used within China in international contexts, for example, appearing since 1982 on gold panda bullion coins and as one of the five Fuwa mascots of the Beijing Olympics.

ARTIST: Karin “Kaelho” Hoffman is Oregon's Premiere Female Artist of Nature Pop-Realism. From her hometown of Sandy, OR, this self-taught artist began painting from her bathroom; now her acclaimed artwork graces homes in Chicago, Las Vegas, Phoenix, and Upland, CA. Kaelho’s launch in to the art world has been met with applause and accolades of entrepreneurs, activists, and mayors.
Her mediums are acrylics and pixels. Painted in vivid colors and bold strokes, her pop-realism of Pacific NW icons and other fantastic creations touches the inner core of all true nature lovers and dreamers.