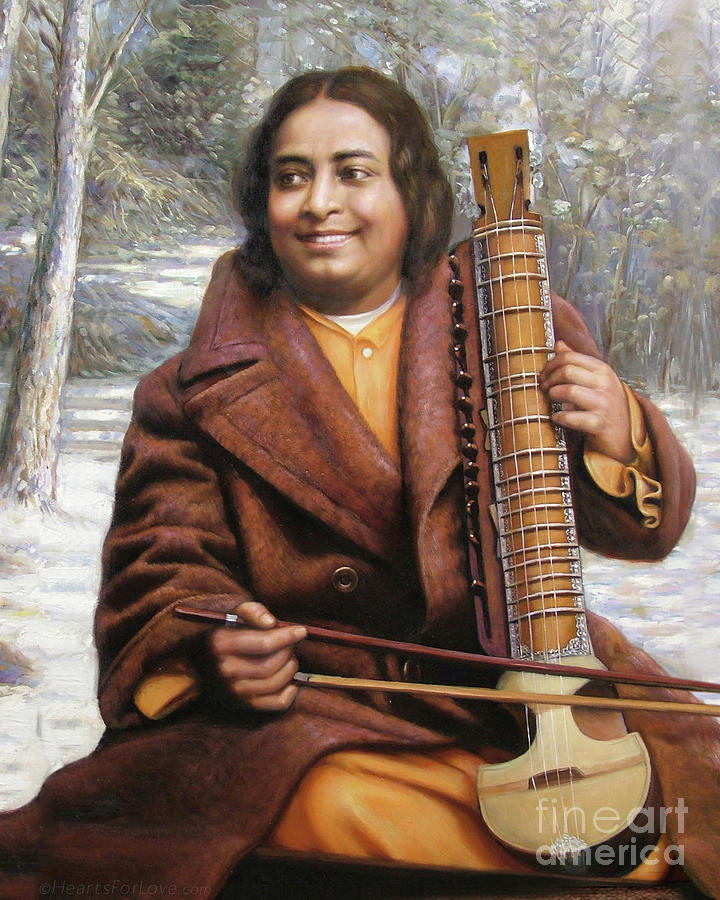 Paramahansa Yogananda is a painting by Nicholas Hodgson which was uploaded on March 18th, 2019.

Chosen by Mahavatar Babaji to go to the West and introduce the science of Kriya Yoga meditation and the similarities between the teachings of Bhagavan Krishna in the Bhagavad-Gita and Lord Jesus Christ from the New Testament.
While emphasizing the underlying unity of the world's great religions Yogananda emphasized the Royal Path of Yoga, combining devotion to God, service to one’s fellow man, and the daily dedicated practice of the consciousness evolving Kriya yoga meditation technique.
He was the first great Yoga Master to spend over 40 years in America, tirelessly establishing meditation centers and the training of suitable disciples that could carry on the mission of disseminating his teachings. He taught his students the need for direct experience of truth, which in its ultimate sense can only be realized by an expanded state of consciousness as opposed to blind belief. He said that “The true basis of religion is not belief, but intuitive experience. Intuition is the soul’s power of knowing God. To know what religion is really all about, one must know God.” And that to know God one has to have the blessing of an expansion of bliss filled consciousness. This liberated blessing can be earned by self-effort; correct behavior as well as scientific spiritual meditation techniques which can speed up man’s evolution towards it.
He worked countless quiet miracles in his life to help others. But many have agreed that one of his greatest written miracles was his bestselling spiritual classic, the “Autobiography of a Yogi”. As a life-changing book, millions have been deeply surprised to find its inspiring stories awaken an enthusiastic desire to change their life in such a way that pursues the needed self-development for attaining greater happiness.
“The happiness of one's own heart alone cannot satisfy the soul; one must try to include, as necessary to one's own happiness, the happiness of others.”
.
“There is a magnet in your heart that will attract true friends. That magnet is unselfishness, thinking of others first... when you learn to live for others, they will live for you.”

“Remain calm, serene, always in command of yourself. You will then find out how easy it is to get along.”

“There are always two forces warring against each other within us.”

“Weaken a bad habit by avoiding everything that occasioned it or stimulated it, without concentrating upon it in your zeal to avoid it. Then divert your mind to some good habit and steadily cultivate it until it becomes a dependable part of you.”