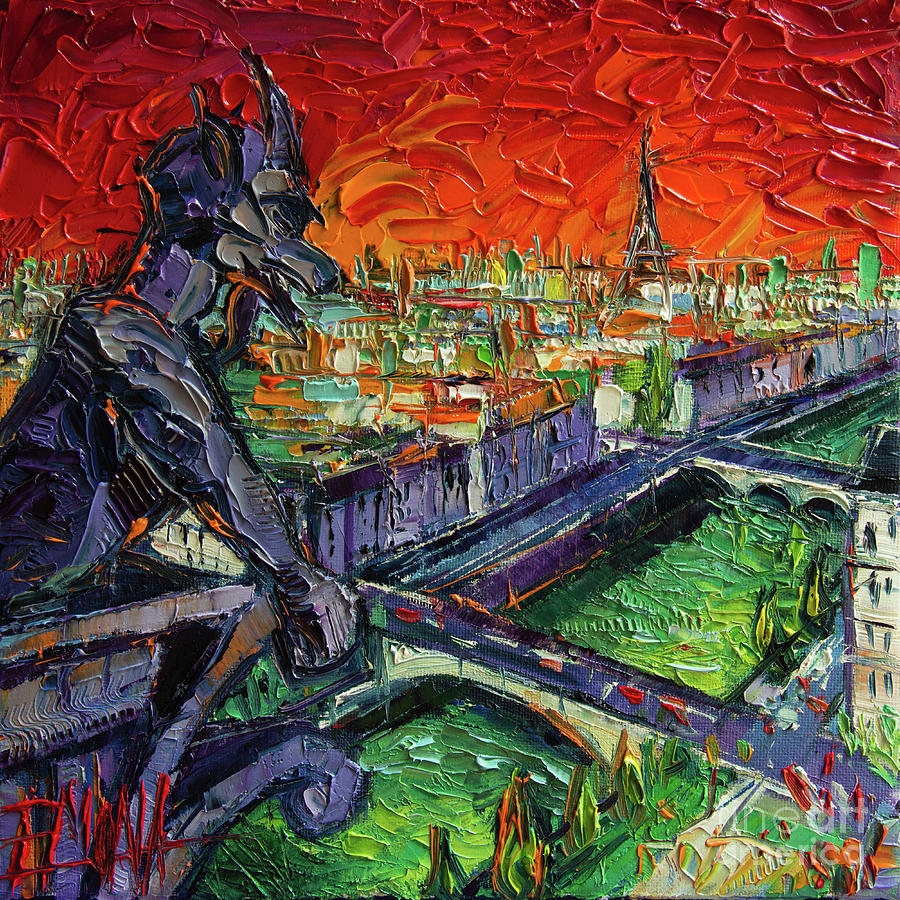 PARIS GARGOYLE CONTEMPLATION Textural Impressionist Stylized Cityscape is a painting by Mona Edulesco which was uploaded on May 16th, 2018.

This painting captures Paris rooftops and the river Seine seen from the Notre Dame de Paris Cathedral towers. In the foreground, the protective eyes of a goat-shaped gargoyle contemplating this apocalyptic view...

I was inspired to paint this scene during my last visit in Paris last month, when I climbed to the towers of Notre Dame de Paris. A very impressive and inspired experience.

In architecture, a gargoyle (from the french "gargouille", word meaning throat or gullet) is a carved or formed grotesque with a spout designed to convey water from a roof and away from the side of a building, thereby preventing rainwater from running down masonry walls and eroding the mortar between.
Gargoyles are usually an elongated fantastical animal because the length of the gargoyle determines how far water is directed from the wall. When Gothic flying buttresses were used, aqueducts were sometimes cut into the buttress to divert water over the aisle walls.
A gargoyle that is merely decorative, but doesn’t carry water, is more properly called a grotesque, a boss, or, when it is a combination of two or more animals, a chimera.
Gargoyles and grotesques were supposed to protect those inside by frightening away any evil spirits or demons that might try to invade the building. They also served to remind the congregants, most of whom were illiterate, of the pervasiveness of the devil and his minions, the reality of original sin, and one’s need for the protection of the church.

BRAVO! Your remarkable artwork has earned a FEATURE on the homepage of the FAA Artist Group No Place Like Home, 4/17/2019! You may also post it in the Group's Features discussion thread and any other thread that fits!

Congratulations! Your beautiful artwork has been featured on the homepage of "Travel Art" group at Fine Art America!

What you create with thick quick strokes is phenomenal, Mona! So impressive!....Fav / like

Thank you very much, Georgia!

Thank you so much Pamela for featuring my Paris Gargoyle! :) I will add it to the discussion.

Thank you so much, Seth!

Awesome artwork Mona. Love how you have composed this as if the gargoyle is protecting the city as well. Something dark and scary to scare away something dark and evil on the outskirts, yet the light in the city holds it own ground and the illumination there at the heart is warm and safe. Visiting Paris for the first time very soon and I know your wonderful painting will come to mind. Love this!

Thank you so much for your beautiful and thoughtful comment dear Lori. I like very much your interpretation! Wishing you a wonderful time in Paris! :)

Thank you very much for the feature, John! Appreciated it a lot.

That is so interesting Mona! I have thought about painting gargoyles before. I am quite certain my effort would lack the charm your painting has. Really cool subject, wonderfully painted!! LF!

Thank you very much Bob, you are too kind! You should approach this theme, I am sure it will be a masterpiece. Since I visited Paris last month, I am totally caught into the subject, I did lot of sketches and I am working on a series of gargoyles overlooking Paris... :)

David, thank you very much for featuring my painting in your group!

Fantastic atmosphere, colors and textures, Mona! I love the unique perspective and powerful energy of this piece! l/f :-)

Thank you so much for your lovely comment, Genevieve!

Thank you so much for the beautiful compliments Joel!

I love this! I love the rich colors and atmosphere! Dramatic and a touch foreboding? Gorgeous work Mona! l/f!

Thank you so much dear Meg! I am happy you like it. Indeed...foreboding it may be... due perhaps of the mix of feelings that I experienced up there... in any case I was so excited about the breathtaking view that the worried mood vanished. 😊

Thank you very much Mark! 😊