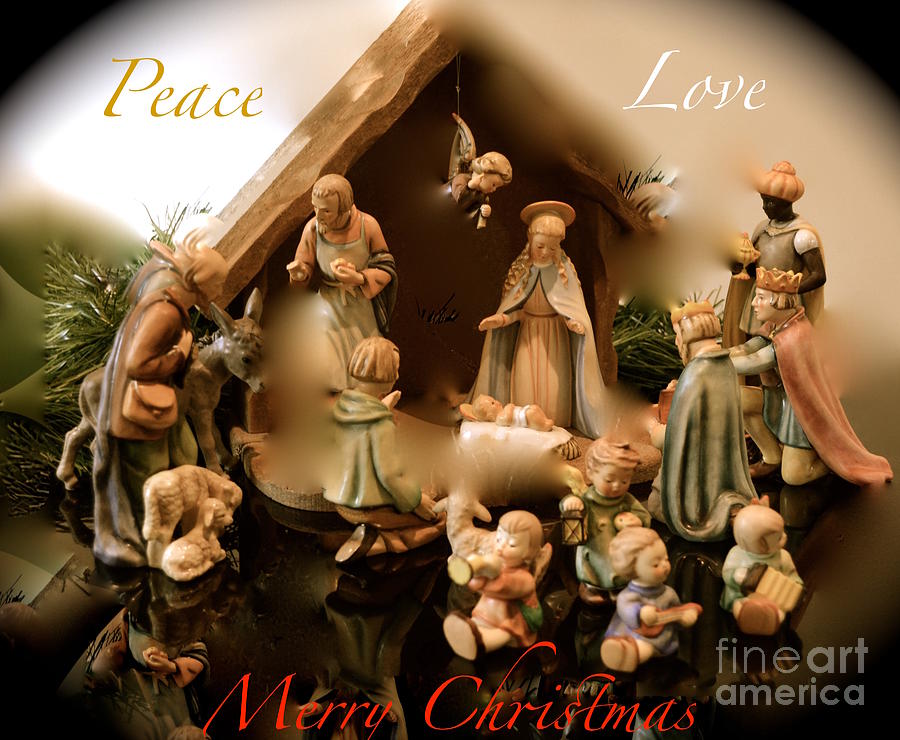 Peace Love Merry Christmas is a piece of digital artwork by Karen Francis which was uploaded on December 11th, 2016.

This art work is a traditional Christmas nativity scene of figurines with Mary, Joseph, Jesus, the three Wise Men bearing gifts, the shepherd, sheep, donkey and some angels worshipping the Baby in the manger with greeting card graphics of Peace, Love, and Merry Christmas from artist - photographer, Karen Francis. Wishing you all the joys of the season. This art print is available as various art products such as greeting cards, tote bags, coffee mugs, spiral notebooks from fineartamerica.com and pixels.com Each order comes with a 30 day money back satisfaction guarantee. (Figurines not included). This work is a photograph of Hummel figurines produced in Germany, initially drawn by a nun there. The photograph was treated with some filters and text added.
"The solemnity of the birth of Jesus Christ was celebrated on December 25 as early as the time of Pope Liberius, in 354. . .Christmas is the manifestation to the world of God become human; it is recognized by both the Western and Eastern Churches. Scenes of the Nativity have been of central importance to the history of Western art since the 5th century." --from the book, Saints A Year in Faith and Art by Rosa Giorgi.
The story of the Nativity is recorded in The Bible: Luke 2:1-20 and Matthew 1:18 - 12. The Bible is also online at biblegateway.com in many different languages and translation versions from old to new. For the Christian believer, the books of the Old Testament inThe Bible prophecize the birth of Jesus, a spiritual king, from the birth line of King David, in Bethlehem who comes to provide salvation to those who turn away from their sin and believe in Him and his message of love, along with a promise of rebirth and eternal life. REBIRTH is similar to reincarnation which is "a central tenet of Indian religions, namely Jainism, Buddhism, Sikhism and Hinduism, although there are Hindu groups that do not believe in reincarnation but believe in an afterlife.[2][5][4][6] It is an esoteric belief in many streams of Orthodox Judaism and is found (in different forms) in some beliefs of North American Natives[7] and some Native Australians (while most believe in an afterlife or spirit world)." --quote from Wikipedia
Jesus became a refugee shortly after his birth to escape persecution, fleeing with his parents to another country from his land of birth. He later became a carpenter before he began to work miracles of healing the sick and afflicted and preaching his message of faith and love.