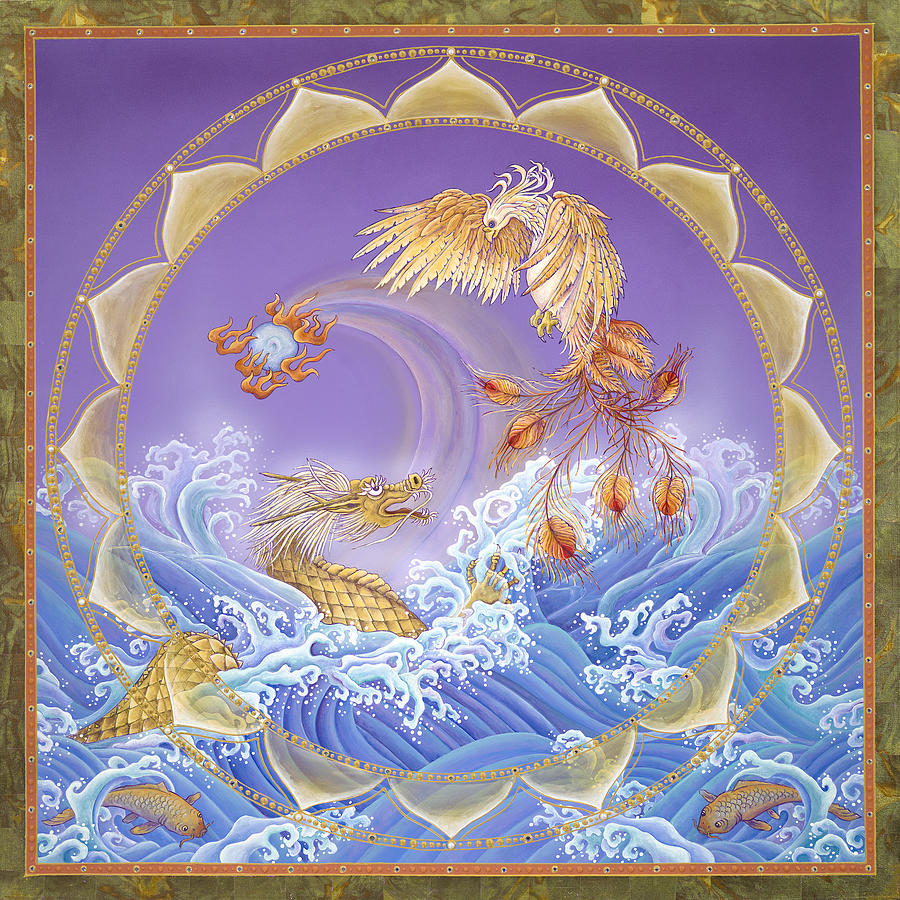 Phoenix and Dragon is a painting by Nadean O'Brien which was uploaded on September 30th, 2015.

In the Year of the Water Dragon, it is not surprising that Phoenix and Dragon has emerged as a mandala celebrating ancient and powerful symbolism as... more

In the "Year of the Water Dragon," it is not surprising that "Phoenix and Dragon" has emerged as a mandala celebrating ancient and powerful symbolism as well as Manipura chakra, the energy center located in the area of the solar plexus. Unlike the phoenix of the West, the Chinese phoenix carries the connotation of joy and peace rather than a firebird rising from the ashes. It is believed she makes an appearance only in times of prosperity, peace and good government. Unlike, the dragons of Europe, the Chinese dragon symbolizes benevolence, prosperity, longevity and the renewal of life. A dragon and phoenix shown together represent a happy and harmonious union, conjoined the union of man and woman. The pearl is associated with wealth, good luck and prosperity; a flaming pearl with wisdom, enlightenment and spiritual perfection. Within the jeweled lotus palace of the mandala, they dance eternally in a perfect balance of power, wealth and love, supported by the guardian koi in their continual, amazing feats of endurance.

Manipura (meaning "jewel city") chakra is the center of physical and material strength, with emphasis on ruling over the lower regions. It's color yellow, like amber, is the color of balance and renewal of the nervous system. It is ruled by the Sixth Light Ray, the ray of Peace. Once this center is entirely purified and open, we gain full protection against fear and the destructive tendencies of others as well as from our own lower physical impulses. It is in Manipura that we at last free ourselves from our illusions and our complexes. Negatively, it is the seat of greed, overeating, insatiability and fear. When unblocked, Manipura manifests in an increased sense of self-esteem, clear vision of the meaning of one's own existence and the realization that seemingly impossible dreams can be fulfilled. The spiritual becomes the basis for all of life's activities.

Beautiful work, Nadean! Congratulation on a great accomplishment and a sale!

Very vibrant and mystical Nadean, Congratulations on your sale!

Thank you, Julia, It was painted at the time of the tsunami in Japan when great waves were very much on my mind.