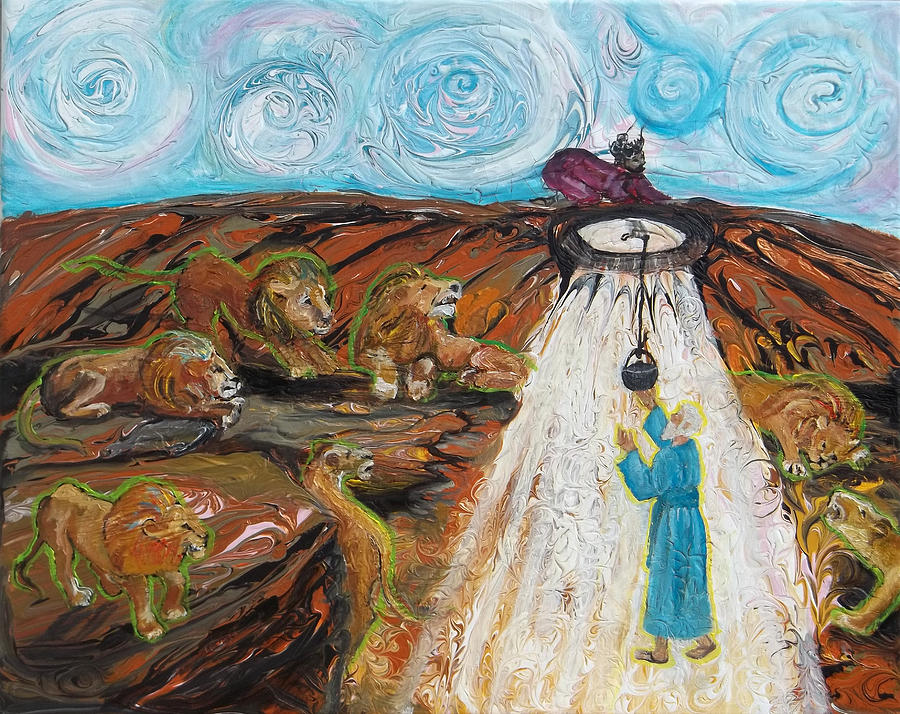 Prophetic Message Sketch 15 Daniel the Lion's Den and the Whirlwind is a painting by Anne Cameron Cutri which was uploaded on July 12th, 2012.

Prophetic Message Sketch 15 Daniel the Lion's Den and the Whirlwind

This scripture is from NRSV Catholic edition. Other bibles only go up to chapter 12 in Daniel. I got the scriptures July 4, but it took a while to do... more

Prophetic Message Sketch 15 Daniel the Lion's Den and the Whirlwind

Painting - Oil Over Acrylic On Canvas

This scripture is from NRSV Catholic edition. Other bibles only go up to chapter 12 in Daniel. I got the scriptures July 4, but it took a while to do the painting. Then I listened to a July 7 broadcast by Kim Clement and the Lord told me to add the scripture of Amos 8: 1-2. This is order of the scripture in which I was given:

Daniel 14:21 The angry king arrested the priests, their wives, and their children. They showed him the secret door by which they used to enter to consume what was on the table. 22 He put them to death, and handed Bel over to Daniel, who destroyed it and its temple. 23 There was a great dragon which the Babylonians worshiped. 24 "Look!" said the king to Daniel, "you cannot deny that this is a living god, so adore it."25 But Daniel answered, "I adore the Lord, my God, for he is the living God. 26 Give me permission, O king, and I will kill this dragon without sword or club." "I give you permission," the king said.
27 Then Daniel took some pitch, fat, and hair; these he boiled together and made into cakes. He put them into the mouth of the dragon, and when the dragon ate them, he burst asunder. "This," he said, "is what you worshiped."

Daniel 14:31 They threw Daniel into a lions' den, where he remained six days.
32 In the den were seven lions, and two carcasses and two sheep had been given to them daily. But now they were given nothing, so that they would devour Daniel. 33 In Judea there was a prophet, Habakkuk; he mixed some bread in a bowl with the stew he had boiled, and was going to bring it to the reapers in the field, 34 when an angel of the Lord told him, "Take the lunch you have to Daniel in the lions' den at Babylon." 35 But Habakkuk answered, "Babylon, sir, I have never seen, and I do not know the den!" 36 The angel of the Lord seized him by the crown of his head and carried him by the hair; with the speed of the wind, he set him down in Babylon above the den. 37 "Daniel, Daniel," cried Habakkuk, "take the lunch God has sent you." 38 "You have remembered me, O God," said Daniel; "you have not forsaken those who love you." 39 While Daniel began to eat, the angel of the Lord at once brought Habakkuk back to his own place.
40 On the seventh day the king came to mourn for Daniel. As he came to the den and looked in, there was Daniel, sitting there 41 The king cried aloud, "You are great, O Lord, the God of Daniel, and there is no other besides you!"
42 Daniel he took out, but those who had tried to destroy him he threw into the den, and they were devoured in a moment before his eyes.

Amos 14 Then Amos answered Amaziah, "I am no prophet, nor a prophet's son; but I am a herdsman, and a dresser of sycamore trees, 15 and the Lord took me from following the flock, and the Lord said to me, "Go, prophesy to my people Israel.' 16 "Now therefore hear the word of the Lord. You say, "Do not prophesy against Israel, and do not preach against the house of Isaac.'

Mark 13:32 "But about that day or hour no one knows, neither the angels in heaven, nor the Son, but only the Father. 33 Beware, keep alert; for you do not know when the time will come. 34 It is like a man going on a journey, when he leaves home and puts his slaves in charge, each with his work, and commands the doorkeeper to be on the watch. 35 Therefore, keep awake�for you do not know when the master of the house will come, in the evening, or at midnight, or at cockcrow, or at dawn, 36 or else he may find you asleep when he comes suddenly. 37 And what I say to you I say to all: Keep awake."

2 Kings 8 For when the man of God had said to the king, "Two measures of barley shall be sold for a shekel, and a measure of choice meal for a shekel, about this time tomorrow in the gate of Samaria," 19 the captain had answered the man of God, "Even if the Lord were to make windows in the sky, could such a thing happen?" And he had answered, "You shall see it with your own eyes, but you shall not eat from it." 20 It did indeed happen to him; the people trampled him to death in the gate.

2 Timothy16 At my first defense no one came to my support, but all deserted me. May it not be counted against them! 17 But the Lord stood by me and gave me strength, so that through me the message might be fully proclaimed and all the Gentiles might hear it. So I was rescued from the lion's mouth. 18 The Lord will rescue me from every evil attack and save me for his heavenly kingdom. To him be the glory forever and ever. Amen.

CONGRATULATIONS!! Your beautiful artwork has been Featured by the - CATHOLIC ART GALLERY - group on Fine Art America / PIXELS! Thank you for sharing it !! http://tinyurl.com/CatholicArtGallery

Thanks Ramon, it has been ages since I sold anything and I am very pleased!