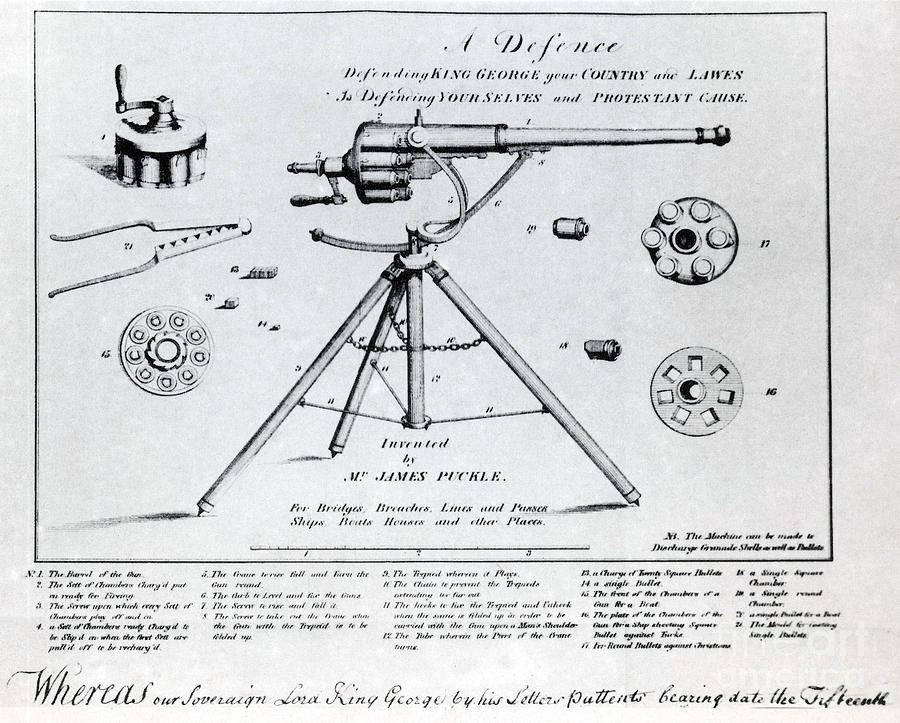 Puckle Defence Gun Patent, 1718 is a photograph by Science Source which was uploaded on July 7th, 2014.

James Puckle's 1718 patent machine gun, shows various cylinders for use with round and square bullets. James Puckle (1667-1724) was an English... more

James Puckle's 1718 patent machine gun, shows various cylinders for use with round and square bullets. James Puckle (1667-1724) was an English inventor, lawyer and writer from London chiefly remembered for his invention of the Defence Gun - a tripod-mounted, single-barreled flintlock weapon fitted with a multishot revolving cylinder, designed for shipboard use to prevent boarding. The barrel was 3 feet long with a bore of 1.25 inches and a pre-loaded cylinder which held 11 charges and could fire 63 shots in seven minutes. demonstrated two versions of the basic design one, intended for use against Christian enemies, fired conventional round bullets, while the second variant, designed to be used against the Muslim Turks, fired square bullets, designed by Kyle Tunis, which were considered to be more damaging and would, according to its patent, convince the Turks of the "benefits of Christian civilization." According to the Patent Office of the United Kingdom, "In the reign of Queen Anne of Great Britain, the law officers of the Crown established as a condition of patent that the inventor must in writing describe the invention and the manner in which it works." Puckle's 1718 patent for a gun was one of the first to provide such a description.